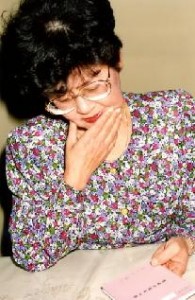 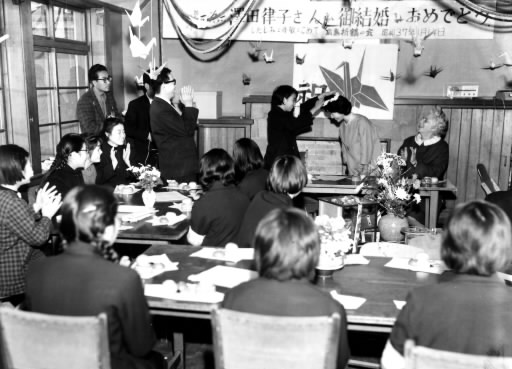 
A-bomb film
Last summer, Ritsuko Ushita developed conjunctivitis. She presented her Atomic Bomb Survivor’s Certificate at the reception desk of an ophthalmology clinic near her home, trying to avoid being seen by others. Until that point, she had hesitated to use the certificate, as she could not dispel a groundless feeling of guilt from the back of her mind. Twenty-eight years after obtaining the certificate, she sought a doctor's aid, as an A-bomb survivor, for the first time.

“When I came here to Tokyo, I saw how our society views the atomic bombing,” Ms. Ushita said. “People said all sorts of things out of curiosity, though I think I should see all the interest in a positive sense, as my mother told me.”

We were at Ms. Ushita's home, located in a quiet residential area along a railroad which extends from the heart of Tokyo to Yokohama. Soft sunlight filled the living room as she traced, in a faint voice, her memories of Hiroshima.

When the atomic bomb exploded, Ms. Ushita became trapped under her family's house after it collapsed. They lived in the Ogawachi area, part of today's Nishi Ward, 1.7 kilometers from the hypocenter. Her mother, Toshiko Sawada, who had been out of the house at the time, survived the bombing, too. But she suffered severe burns to her neck, which would remain as keloid scars.

Ms. Ushita’s father Iwao was discharged from the military after the war, but died four years later, battling a lung ailment. Her mother's work involved collecting payments for electric bills. After her sister, who was three years older, got married, she had her mother's love all to herself. Her mother was a kind, hard-working woman, but Ms. Ushita felt anxious about the cotton she was continually applying to her neck.

Reflecting on why she and mother came to appear in a documentary film on the atomic bombing, Ms. Ushita said, “In retrospect, we were included in the film in order to convey the horror of radiation.” The film, entitled “Sekai wa Kyofu Suru” (“The World is Terrified”), was produced in 1957 by Fumio Kamei, the foremost director of documentary films at the time, on the heels of a movement against atomic and hydrogen bombs that gained momentum in the wake of the Bikini incident. The film received a strong response both at home and abroad.

Shown in the film are “the mother and daughter of the Sawada family,” a 44-year-old woman lying in a bed at the Atomic Bomb Survivors Hospital in Hiroshima and her 17-year-old daughter who commuted to high school from the hospital room.

Before the film was released, Toshiko suffered massive bleeding from her carotid artery in connection with skin cancer. Her daughter, Ms. Ushita, caught the attention of peace activists and others as a witness of the “terror” on behalf of her mother.

When the Soviet Union announced a halt to its nuclear testing program, Ms. Ushita sent a letter of “gratitude” to then Soviet Premier Nikita Khrushchev. She also presented welcome bouquets to well-known figures when they visited Hiroshima Peace Memorial Park. “Partly, I was doing exactly what adults were telling me to do,” she said. “But my heart was really filled with the feeling that the atomic bomb must be done away with.”

At the age of 21, Ms. Ushita left Hiroshima. Kengo Ushita, 62, a native of Tokyo who would become her husband, fell in love with her at first sight. Attracted by his warm personality, she married him. But questions that stabbed at her heart continued to be thrust her way by people around her: “Did you experience the atomic bombing? Are your children all right?”

For some time, she even hid the fact that she was from Hiroshima. “My older sister in Hiroshima has always been in delicate health, but she became worried about me when I had trouble with my eyes,” Ms. Ushita explained. “So I decided to make use of the benefits from the Atomic Bomb Survivor’s Certificate. I use the certificate at my convenience, while hiding my A-bomb experience. I'm so selfish.” Her eyes quickly filled with tears.

Though she had declined my initial request for an interview, she finally agreed, despite the difficult emotions involved, as a result of encouragement from her son. “Mom, you haven't done anything wrong,” he told her.

After telling her story about the atomic bombing, she began to talk about her daily life and show a smile. Around this time, the winter day darkened into night. On my way home, Ms. Ushita went to the trouble of escorting me to the bus stop. She said, “Nearly 50 years have passed since the atomic bombing. If I can do something for peace, in my own way, perhaps I should try...”

The fact that she used the Atomic Bomb Survivor’s Certificate for the first time since obtaining the document 28 years ago may also have been prompted by such a conviction.

“Sekai wa Kyofu Suru” (“The World is Terrified”) is an 80-minute film which depicts the horror of radiation through patients with A-bomb disease and experiments involving radiation exposure on living things. Versions of the film have been created in English, French, and Russian. Musei Tokugawa, a famous film narrator, narrated the Japanese version. The director of the film, Fumio Kamei, died in 1987.