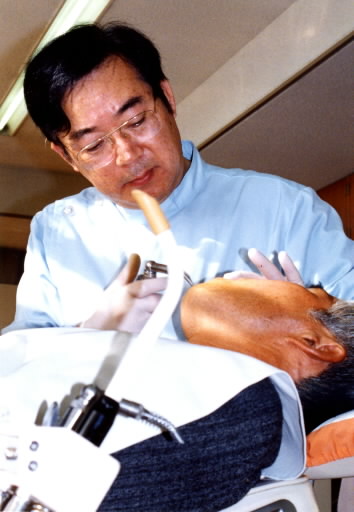 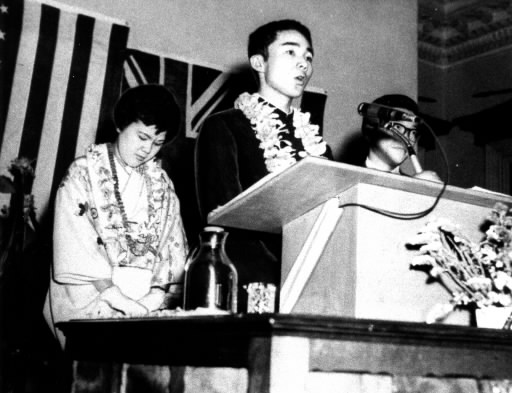 
World Peace Pilgrimage
The passing of more than 30 years has turned a boy who, wearing his school uniform, appealed for “No More Hiroshimas” in the Gandhi Hall in London, into a gentleman with a mild countenance. I had come to see Dr. Hiromasa Hanabusa at the Chiyo Dental Clinic, which has been in operation for three generations in the city of Zentsuji in Kagawa Prefecture. As morning sunlight filters into the room, Dr. Hanabusa busily attends to his patients, moving from one chair to the next. Few people, though, are aware of Dr. Hanabusa's past, the fact that he traveled to a number of nations as a member of the “World Peace Pilgrimage.”

“That pilgrimage is my starting point,” Dr. Hanabusa said. “I encountered a lot of people and learned about their pain. I'm an ordinary dentist now. But when an article on the atomic bombing appears in the newspaper, it captures my attention. I guess, somewhere in my mind, I care deeply about the A-bombed city of Hiroshima.”

He was two years old when the atomic bomb was dropped on Hiroshima. Prior to the blast, he had been evacuated to the city of Fukuyama in Hiroshima Prefecture with his grandmother. However, his mother died in the atomic bombing and his father died of illness shortly after he was discharged from the military. Dr. Hanabusa has no memory of his parents. For this reason he was chosen to join the pilgrimage. “But why me?” Dr. Hanabusa said. “There were scores of orphans in Hiroshima at the time, weren't there?”

Dr. Hanabusa holds bittersweet memories of his childhood, when he and his grandmother were huddled in a corner of Hiroshima that was actively undergoing reconstruction. He recalls wandering around the area with an empty stomach, his playmates leaving him when they were called home by their mothers. Sitting in the dimly lit waiting room of the train station, he would clutch his knees to his chest and wait for his grandmother to come back from her day of peddling.

Feeling that his will to go on could collapse at any moment, the boy's heart was sustained by the melodies of church hymns. Every Saturday he went to Nagarekawa Church, and encountered other children there who were suffering in the same ways. Above all, he looked forward to the letters and canned goods that would come from the United States. At the time, a “moral adoption campaign” was being conducted, in which Americans volunteered to become foster parents to A-bomb orphans and provide them assistance from afar. Workers in an office of the Kodak Company, a maker of film, became Dr. Hanabusa’s foster parents.

Dr. Hanabusa once wrote about the emotions that an encounter with a professional baseball player of the Hiroshima Toyo Carp had awakened in him. The result of that encounter was the arrival, soon after, of a bat and baseball glove. Speaking of this incident, a clergyman told him: “Your parents in the United States are watching over you.” The man's words sank straight into the boy's heart.

Just prior to his graduation from Prefectural Hiroshima Commercial School, he was asked to take part in the pilgrimage. There was sharp criticism, however, over the fact that such a boy was chosen, since he was not an A-bomb survivor nor had he been active in the peace movement against nuclear weapons.

Though he felt like fleeing from the offer, Ichiro Kawamoto, 66, the founder of the Hiroshima Paper Crane Club, took him to meet a number of A-bomb survivors. When Dr. Hanabusa spoke with an elderly woman who was living alone in an area that was densely packed with shacks, he was reminded of his grandmother. As the woman talked about her life, and the fact that everything in her world lay in ruins in an instant, he reflected on his grandmother and he came to see the reality of the A-bombed city of Hiroshima. Following this experience, he at last made up his mind to join the global journey.

During the five-month pilgrimage, he took part in more than 150 gatherings. The schedule was so tight that the only time he was not at a gathering was when the group was on the road.

At a meeting in the city of Rochester in the U.S. state of New York, Dr. Hanabusa was greeted by the smiles of 70 people. The MC for the event spoke to the crowd, saying, “Our son Hiro has come back!” His moral parents were there and they had filled the venue. “You've been trying so hard,” they told him. Some of the people were in tears; the boy was in tears, too.

The pilgrimage opened Dr. Hanabusa’s eyes to Hiroshima’s A-bomb experience. This is why he decided to pursue a career in the field of international relations and study abroad at Wilmington University in the United States. However, his plans changed when he decided to succeed his wife's father in the family dental practice.

Dr. Hanabusa felt guilty for parting with the efforts of the A-bombed city of Hiroshima. “They had gone so far as to let me take part in the pilgrimage,” he said.

Such feelings, though, were soothed by the words of Barbara Reynolds, a peace activist and the person who initiated the pilgrimage, with whom Dr. Hanabusa traveled. She told him that easing the suffering of others as a doctor was also a path that contributed to peace. So, at the age of 27, Dr. Hanabusa found a new form for his peace efforts.

“Whenever I wavered, there was someone there to guide me,” Dr. Hanabusa said. “For the past 50 years, I have keenly felt the warmth of others' love.” Speaking about his children, he stopped and corrected the number from seven children to nine. Apparently, his wife Atsuko, 51, had become a moral parent of orphans in Honduras and India without first informing Dr. Hanabusa. He was glad, though, to hear the news.

“We receive pictures like the ones I used to draw as a child,” he said.

The Hiroshima World Peace Pilgrimage was organized by Barbara Reynolds, a peace activist, and others to call for the elimination of nuclear weapons. In 1962, Ms. Reynolds, Miyoko Matsubara, an A-bomb survivor, and Dr. Hanabusa visited 14 nations, including the Untied States and the Soviet Union. In 1964, Dr. Hanabusa joined a second pilgrimage and visited eight nations.