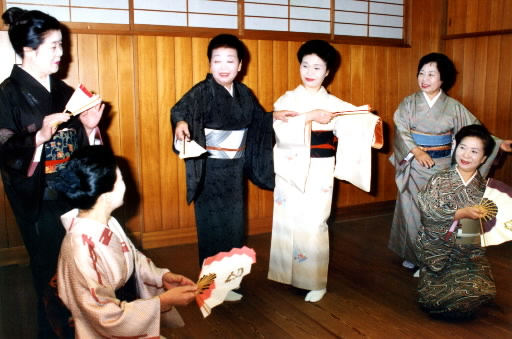 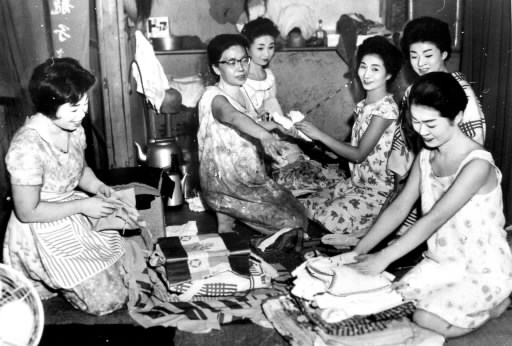 
A women's dance troupe
“A Life of Women Alone.” An article with this headline and an accompanying photo, published 32 years ago, was the only clue I had to pursue an interview.

The photo of six women was apparently taken in a dressing room of the Asakusa Shochiku Entertainment Hall, which is no longer in existence. The women, members of “The Amatsu Ryuko Troupe,” had just finished a dance performance. The article says that all six women experienced the atomic bombing of Hiroshima and that the leader of the troupe, along with her assistant, raised her four nieces. I wondered where these women were now and what they were doing.

I finally located Ryuko Amatsu, born Shizue Kato, in an old section of Tokyo, close to Asakusa. A sign reading “Japanese Dance Studio” hung beside the front door of her house. Though her dancing and acting troupe had already disbanded, Ryuko still lives with Yoko, her best friend from their student days at a girls' school, and her four nieces.

“Looking back, I'm kind of surprised that I've been able to survive this long. But I've rarely brooded over things,” said Ryuko, the former leader of the troupe, in a crisp tone. Yoko, who had served as the troupe's assistant leader, lightly expressed her agreement. “We're all optimists,” she said.

All six women were exposed to the atomic bombing at Ryuko's parents' house in downtown Hiroshima. Ryuko's older sister, who was also with them at the time of the blast, died the following year, leaving her four daughters behind. At almost the same time, an official notice arrived regarding the death of the sister's husband in the war. The future of her very young nieces, with the oldest just nine at the time, came to rest on the shoulders of Ryuko, then an 18-year-old girl who had lost her own parents early in her life.

“My adult relatives wouldn't take in the girls,” Ryuko explained. “I can't blame them, considering the conditions of the time. So I thought, 'Well, it's up to me.'” Learning of Ryuko's determination to provide for her nieces, Yoko was moved to help.

It was a time, though, when even grown men had few prospects of finding work. Ryuko and Yoko organized a traveling troupe, making the best use of their talent for Japanese dancing, a skill they had practiced since childhood and had come to master. The dance troupe visited islands in the Seto Inland Sea and areas of Tottori, Shimane, and Yamaguchi prefectures on the Sea of Japan, where people did not suffer as much from food shortages. The nieces also appeared on stage, in order of age after graduating from junior high school.

In 1956, Ryuko gave up the itinerant lifestyle and the troupe settled in Asakusa, a mecca for entertainment. There they devoted themselves single-mindedly to dancing and earned a number of prizes for their performances at arts festivals. They also captured the attention of the mass media. However, whenever they were featured in the media, the description of their work was invariably accompanied by such modifiers as “the atomic bombing” and “orphans.”

The oldest niece, Ikue Izutsu, 58, reflected on those days and said, “Sure, we were orphans. But I hated to be called that. Our moms were trying so hard so we wouldn't feel lonely because we didn't have our parents.” The four nieces still call Ryuko and Yoko “Mom.”

Even so, I wondered if none of them thought of pursuing careers other than dancing and leading an ordinary married life. Ryuko answered my intrusive question in this way: “Maybe it was because of the atomic bombing. We all tend to get tired so easily and we couldn't strain ourselves. So we thought we would just live out our lives, staying devoted to the style of dance we love.”

Eighteen years ago, Ryuko returned the professional stage name she had been granted to use by a major school of Japanese dancing, and established the Amatsu school with the five women. Now, the school has about 200 students.

A three-story building that combines their home with a dance studio has an area of 83 square meters. It is the fruit brought forth by these women, hand in hand, in surviving the roaring flames of August 6, 1945 and overcoming the cruel fate of the atomic bombing.

According to research conducted by the Ministry of Health and Welfare in 1950, World War II left 28,000 orphans (up to 18 years old) in Japan whose parents died in the war or war-related accidents. If the number of children who lost their parents due to illness were included, the total would be 123,000 orphans at that time. By region, Hiroshima, with 5,975 children, had the largest number of war orphans.