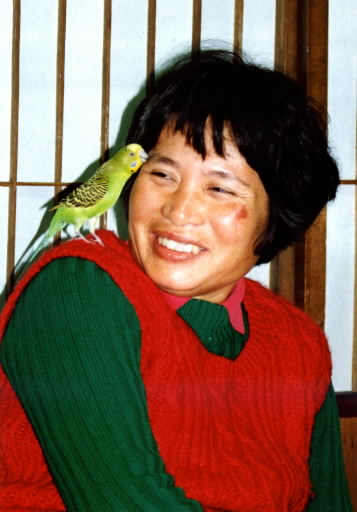 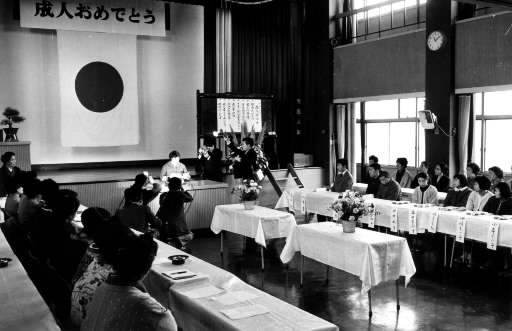 
A-bomb microcephaly
After returning home from a facility for people with special needs, Narumi Toda begins to talk with her parakeet. “Lilly, I’m home. They said we wouldn't get a bonus this year...” In a dimly lit hall, she talks happily about the events of her day, including her visit to the facility and seeing her friends there. Her chats with Lilly sometimes last more than 30 minutes.

Lilly is Narumi's third parakeet. The birds have helped ease her loneliness after losing her father to stomach cancer 17 years ago. Each day, too, she waits for her mother Yukiyo, 74, to come home from work.

“But the female birds aren't very fun, because they don't speak,” Narumi said, wearing a shy smile. She stands 146 centimeters tall and streaks of gray are evident in her hair. Though she is capable of basic reading and writing, she is poor at calculations. Narumi is one of 24 patients with A-bomb microcephaly in Japan.

Yukiyo was exposed to the atomic bombing at her home in the Teppo area, about 800 meters from the hypocenter. She crawled out from the wreckage of her house and fled to a river to avoid the approaching flames. She had no energy to worry about the three-month-old fetus in her womb. In February of the following year, she gave birth to the baby she named Narumi. By then, as a result of the aftereffects of the bomb's radiation, all of Yukiyo's hair had fallen out.

The infant was very small and thin. The people around Yukiyo told her, “A baby of the atomic bombing won't grow,” but she refused to accept their words. Instead of the breast milk that Yukiyo was unable to produce, she mashed boiled rice and mixed it with rationed milk. She became worried when Narumi had convulsions and would rarely say a word.

When Narumi was five years old, Yukiyo was shocked to hear her daughter's diagnosis at the Hiroshima Red Cross Hospital. The doctor told her that the atomic bombing had affected the girl. Before she knew it, she was shouting, “This child was in my womb!”

It was not until much later that Yukiyo heard the name of the disease: myeloid aplastic anemia. While often crying, Narumi would be lying beside Yukiyo, who was engaged in part-time work. “How could such a thing happen to a child who has nothing to do with war?” Yukiyo thought. It pained her to see the child's small, puffy face, swollen from crying.

“It's cruel of me, but I sometimes hoped that she would die before she grew up,” Yukiyo said. To her surprise, Narumi received an award for “perfect attendance” at the graduation ceremony for her elementary school. Even if Narumi was feeling poor and remained in bed, she went to school once she felt a little better. “Perhaps she wanted to see her classmates,” Yukiyo added.

The “Asa Welfare Workshop,” to which Narumi commutes, is a three-minute walk from their apartment. Narumi quietly bakes cookies in a room with a large window which lets in the winter sunshine. She began to go to the facility ten years ago when it opened and Narumi is now a leader for the workshop's 18 members. She is in charge of a trial effort to produce cookies with the aim of selling them to the public.

“I'm happiest when I'm working,” Narumi said. “I also go to karaoke. Songs I sing often? I sing songs like 'Kawa no Nagare no Yoni' ['Like the Flow of the River'].”

After graduating from junior high school, Narumi worked for seven years at a sewing factory in the city of Fuchu, Hiroshima Prefecture. She also experienced dormitory life then. Yukiyo clearly realized how much her daughter had grown when she received a letter from Narumi that mentioned only when she was planning to come home. Yukiyo said, “I wasn't sure about her living and working there. It was thanks to her father's decision.” Yukiyo looked up at a drawing of the boyish-looking father, Takao, that Narumi made on Father's Day. Takao smiled back at her.

The passing of time has been relentless. Yukiyo is definitely feeling her age and has never been in good health. Her three sons tell her not to worry, but her heart aches to think about the worst-case scenario.

“It amazes me that such a weak child has survived for so long. I wonder what she's been thinking as she's grown over the years.” Narumi, with her parakeet Lilly on her shoulder, turned around. The sound of the ticking wall clock echoed in the room. “I can't die before her,” Yukiyo said.

A-bomb microchephaly, a severe case of microcephaly accompanied by mental disabilities, is suffered by those who were exposed to a high dose of radiation from the atomic bomb while in the mother's womb in an early stage of pregnancy. Relief measures for these patients center on the provision of allowances, including the Special Medical Allowance and the A-bomb Microcephaly Allowance. Calls for “life-long security” have become pressing as the parents of these patients grow older.