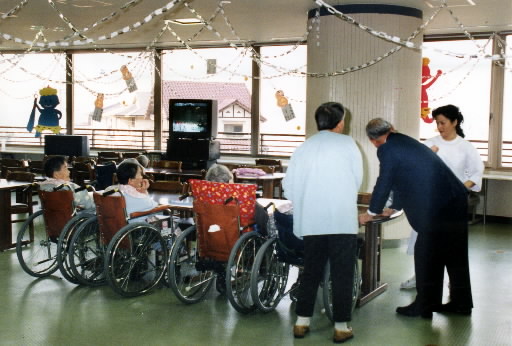 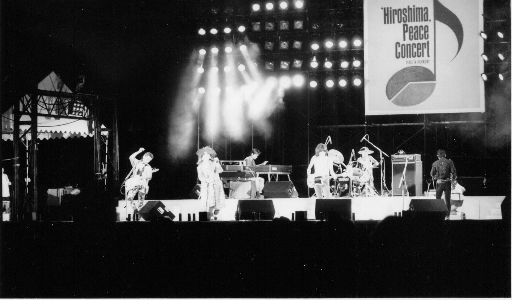 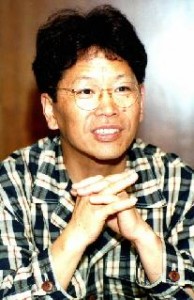 Microcephaly patients born with disabilities, including mental disabilities, after being exposed to the atomic bomb while in their mothers’ wombs... Old, lonely A-bomb survivors forced to live their lives in isolation because of the bomb... Even now, 50 years after the city of Hiroshima was attacked, the bodies of such people continue to prompt questions about the sinfulness of the bombing and the suffering it wrought.

Are the welfare facilities set up by the government really sufficient for the A-bombed elderly and the mentally disabled? The Chugoku Shimbun paid visits to a microcephaly patient and a lonely A-bomb survivor who have lived alongside people enduring similar plights for the past 25 years at their respective facilities.

Currently, the Ministry of Health and Welfare holds a list of 24 people who have been registered as microcephaly patients. Meanwhile, the situation involving aging A-bomb survivors has changed with the passing of time and a new class of survivors, though they still have family, are nevertheless facing a “psychological isolation.”


The loneliness of elderly A-bomb survivors
Hideko Ezu places offerings on the table by her bed, closes her eyes, and prays for the victims of the atomic bomb and her friends at the A-bomb nursing home who have already passed away.

Twenty-five years have passed since she entered the facility. Time has slipped quietly by, like the flowing waters of a narrow stream. Days without special incident continue. “But I’m surrounded by people who have experienced similar things, so I’ve never felt lonely,” Ms. Ezu said, smiling like a young girl.

It was September 1970 when Ms. Ezu entered Funairi Mutsumi-en, a nursing home for A-bomb survivors that had just been completed in Naka Ward, Hiroshima. At the time, the issue of “old and lonely A-bomb survivors” who had lost their family members to the blast was starting to become a social concern.

“My husband and children died as a result of the bombing,” she said. “Although I was able to overcome my own ailments, I had nowhere else to go...” Similar souls were clustered at the Atomic Bomb Survivors’ Hospital, and in the housing complex in the Motomachi district, where they would pass their aging days after hope slipped away.

After long years of appeals, a nursing home, a three-story building made of reinforced concrete, was constructed. Mutsumi-en, which could house 100 patients needing regular care and 50 patients requiring special care, was the “home of hope” for these elderly A-bomb survivors.

As soon as the nursing home was completed, nine survivors entered the facility from the Atomic Bomb Survivors’ Hospital. The Chugoku Shimbun described the joy of these nine survivors in its issue dated April 22, 1970: “The elderly survivors, starting a new life, greeted each other happily.”

Hideko Ezu was one of these “old and lonely survivors.” On the day of the bombing, she was at home in the Ujina district with her niece. She had just brought her niece back to Hiroshima from the city of Tokuyama, where the girl had experienced an air raid at the end of July. Fortunately, the two suffered no major injuries in the A-bomb blast.

After the war, her marriage turned sour and she soon sought a divorce. She then scraped together a living by running a rental book shop at a city-run housing complex in Motomachi. Her niece eventually married and Ms. Ezu lived alone for more than 10 years. Her 70th birthday was approaching and living alone was becoming increasingly difficult.

“I thought that living in a home would be safer than living alone on welfare,” she said. The room she settled into with her few belongings, a living space for 10 people, still smelled of new tatami mats upon her arrival.

At Mutsumi-en, she devoted her time to hobbies, such as playing the organ, dancing, doing handicrafts, and making artificial flowers. It was a way of life designed to forget the loneliness and hardship of her past.

Three years ago, a special nursing home for A-bomb patients, called Kurakake Nozomi-en, was completed in Asakita Ward, Hiroshima. The facility can accommodate up to 300 people. Ms. Ezu moved from Mutsumi-en to a four-person room on the second floor of Nozomi-en. The room is called “Himawari,” or “Sunflower.” The large window to the northwest offers a view of Takeda Mountain and the newly-built residential area spreading out below it.

Over the past 25 years, A-bomb nursing homes have seen changes. At Nozomi-en, a five-story building on the slope of a quiet neighborhood, people must take the elevator to reach the second floor. A large glass door divides the hallway from the living space. This door will not open unless a security code is entered.

“It’s designed for the safety of the patients, because not long ago many of them were roaming around the building,” explained a staff member of the home. “Even so, some of them try to force the door open.” She showed a look of concern.

Just prior to lunch, the staff brings the patients, sitting in wheelchairs, to the cafeteria and common room, located in the center of each floor. Traditional Japanese songs can be heard coming loudly from a laserdisc playing on a TV screen.

The patients engage in no conversation. Some of them have their eyes closed and their mouths open as they face the table, while others just stare blankly into space...

All of a sudden one elderly woman shouts, “I would rather die!” Because of her tendency to roam about, the woman is strapped around the waist to her wheelchair. She wants to get away but she can’t...this is what the woman is trying to say. A staff member, in a calm voice, says, “Give her a piece of candy. Eat it slowly, now.”

At the end of last year, the average age of the residents living at Nozomi-en was over 83. Of these 300 residents, two-thirds rely on a walking stick or wheelchair, and one-third use diapers. Dementia is also becoming more prevalent. As the survivors grow older, the average age within the A-bomb nursing homes has risen rapidly, along with the need for intensive care.

“Whether the twilight years of the elderly become a time of pity or a warm glow depends on the relationship between the caregiver and the patient. When the caregiver neglects the spirit of service, a nursing home cannot properly be called a home.” The words of Norio Ebie, chairman of the Alliance of Hiroshima Prefecture Welfare Facility for Seniors, carry a weighty ring.

Because Ms. Ezu’s health has not been good, she now eats her meals alone in bed. Lately, she often looks back on the days she enjoyed with Asako Kodama, with whom she spent 19 years at the home. Ms. Kodama passed away three years ago at the age of 72.

Ms. Kodama was also an “old and lonely A-bomb survivor.” She lost her parents to the bomb, and her husband, who experienced the blast with her, passed away 23 years ago, worrying about the future of his sickly wife. Ms. Kodama, then on her own, entered the home the next year.

Both women were deeply scarred by the bombing. Ms. Ezu and Ms. Kodama talked together about their elderly years. If they had not experienced the atomic bomb, they said, they might not have been forced to suffer such loneliness.

These days, Ms. Ezu spends a good deal of time organizing her affairs to prepare for her own passing. She plans to bequeath her modest savings and some belongings to her sister, who lives in Tokuyama, Yamaguchi Prefecture.

“I hope they at least give me a funeral...” Ms. Ezu shares the wish that her family will do this small deed, in memory of her and the life that she has lived. She would like her savings to be used for this purpose. The earnest desire for a funeral is shared among the “old and lonely A-bomb survivors.”

The singers Kosetsu Minami and Kotaro Yamamoto played a large part in the construction of the third A-bomb survivors’ nursing home, Nozomi-en.

The two singers first thought of holding a peace concert in 1986, which was also the United Nations-designated International Peace Year. Work towards this event began the previous year when Mr. Yamamoto discussed his dream of “holding a concert in the A-bombed city and using the proceeds to aid the A-bomb survivors” with the young people who attended a youth forum sponsored by the City of Hiroshima.

At the “Peace Memorial Concert HIROSHIMA,” held at Hiroshima Shudo University on August 5, 1986, 29 groups and 200 musicians from five countries, including Korea and the United States, performed for free in front of 15,000 young people.

Encouraged by the positive response, the singers decided to organize a ten-year project dubbed “HIROSHIMA '87-'97 Concerts” in the hopes of realizing a “long-term peace project through music.” The proceeds of 70 million yen from that first year were donated to the City of Hiroshima in order to help build a nursing home for A-bomb survivors.

Despite certain complications, a concert was held every year afterwards. As of last year, the donations total 158 million yen, and in 1992, Nozomi-en was completed. This year, which is also the 50th anniversary of the atomic bombing, the tenth and final concert will be held at the Hiroshima Kosei Nenkin Kaikan in Hiroshima.

Mr. Kosetsu comments: “A simple concert gained the sympathy of many, moved the government, and yet remained a simple concert. I felt the importance of the courage needed to take the first step. I hope to go on thinking about the concerns of Hiroshima and Nagasaki for the rest of my life."