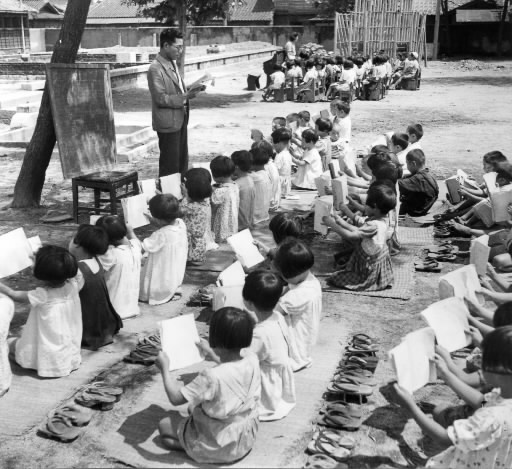 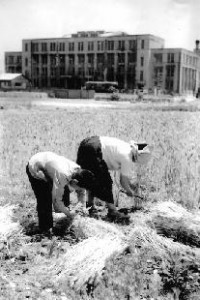 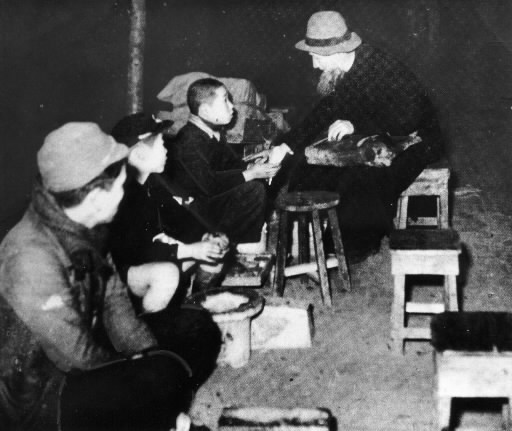 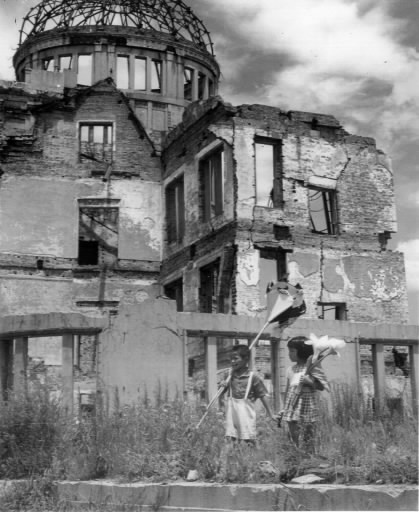 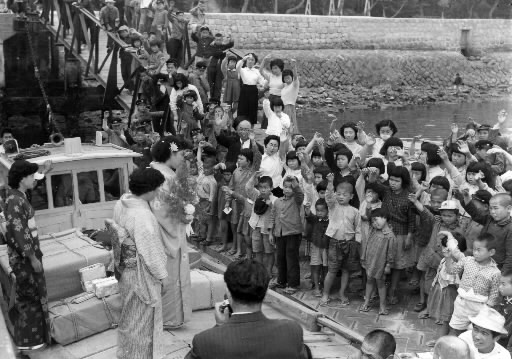 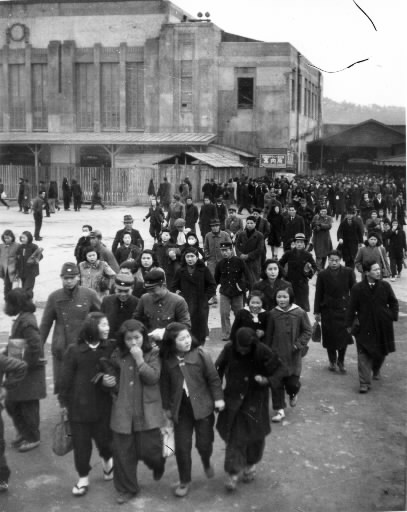 “The History of Hiroshima: 1945-1995,” which traces the city of Hiroshima in the 50-year period following the dropping of the atomic bomb, has looked closely at the lives of the A-bomb survivors, from the time of deconstruction to the days of reconstruction. Before beginning the next series of articles, which will focus on the memorials raised to the dead, the handing down of the A-bomb legacy, and campaigns for peace and movements against atomic and hydrogen bombs, a collection of photos will be shared that show the vitality of those who rose again from the devastation of the atomic attack. On the brink of grief and despair, and despite suffering a hellish nightmare that came from a single flash of light, the people of Hiroshima vowed to revive their city. Though witnessing a world of death, which robbed them of even human emotion, a flame of hope continued to flicker in their eyes.


Hearts retain hope on road to recovery
Open-air classes evince will to live, despite poverty

A male teacher leads a reading lesson for a Japanese class. Beyond him, a female teacher holds a music lesson with an organ in the rear. Though their grade is unknown, the students in the foreground appear young. They sit upright on their heels upon a straw mat. The wooden clogs (“geta”) lined up beside the mat seem too large for their small feet. Perhaps the children borrowed this footwear from their parents. The photo was taken in early summer, three years after the atomic bombing. It shows “open-air” classes that were held at Koujinmachi Elementary School in Minami Ward.

The male teacher is Toshiki Kouno, and the female teacher is Kiyoko Nakayoshi. Mr. Kouno passed away 21 years ago at the age of 67, but Ms. Nakayoshi still lives in the town of Akitsu in Hiroshima Prefecture, a place scented by the Seto Inland Sea. She is now 67, too. “It was a difficult time, but everyone was doing the best they could to go on with life,” she said. Her memories of the long-ago past remain vivid.

The school’s open-air classes in the schoolyard began to be held in September 1945, following the end of the war. The school’s record of its history describes the day of the bombing, August 6, with these words: “The school building was completely destroyed by a massive attack from the air that used an atomic bomb.” The school, located 2 kilometers from the hypocenter, managed to avoid the fire, but the blast flattened the building. Only the auditorium, which was constructed with a steel frame, was left standing.

In the aftermath of the war, a black market and public market sprang up around Hiroshima Station and the school was located in this same district. With the area burgeoning, the population grew. Children who had been evacuated to the countryside, prior to the bombing, also returned to the city. Though the school had an enrollment of just 148 students in 1945, the number had grown to 741 by 1948. The school, though, could only provide six classrooms, which consisted of four temporary classroom spaces and the auditorium, which was divided into two rooms. This was not enough space for the school’s needs, but they made do by holding lessons for the children at two different times, one group in the morning and another group in the afternoon.

“If a class next door in the auditorium was holding a reading lesson, we could hear their loud voices clearly,” Ms. Nakayoshi recalled. A colleague, Sachiko Umano (formerly, Tamazaki), 64, of Naka Ward, said, “I even considered quitting, when it became exhausting having to raise my voice to be heard over the adjacent classroom.” The open-air classes, which could be held without these difficulties, became quite popular among the teachers.

“Our lives were still a test of endurance,” said Hiroshi Sasamura, 86, a resident of Naka Ward, who was the principal at the time. Textbooks were printed on rough paper. When textbooks from the war time were used, militaristic passages were crossed out. For some open-air classes, tangerine crates were used as desks, and the students learned to write Japanese characters by scratching into the ground with old nails that they picked up.

Mr. Sasamura ate only potatoes for lunch. Seeing this, the parents of his students expressed sympathy. When a representative from the General Headquarters of the Allied Forces (GHQ) came to inspect the school, he ordered that the teachers be provided with school lunches, too. Until then, only the students were being given school lunches. Though these lunches consisted only of powdered skim milk that was mixed with water, the hungry children nevertheless looked forward to these lunches more than they did their lessons.

Ms. Nakayoshi’s first teaching position was at Koujinmachi Elementary School and her memories of those days are especially strong. “The children and their parents were living as best they could,” she recalled. “They were working so hard and helping each other. It was a lively time, with a lot of warmth, and the teacher and students often played together.” Despite the poverty that surrounded them, they still provided children with a basic education.

Students from the class of 1950, who were taught by both Ms. Nakayoshi and her successor, Motoi Mitao, 76, of Naka Ward, have held class reunions for the past 30 years. The two teachers also make an effort to attend. Having overcome those difficult days together, the teachers and students share a strong bond. Their conversations invariably return to that time: “If you had geta, or something else to wear on your feet, you were lucky.” “The noodle soup for lunch had only three noodles.”

Kuniaki Oomori, 56, of Higashi Ward, organizes these reunions. Every year he receives gifts of bamboo shoots in the spring and potherb mustard in the winter. These seasonal foods are grown by Mr. Mitao. With these gifts, grown with devoted care by his former teacher, Mr. Oomori visits his former classmates.

In September 1948 the open-air classes of Koujimmachi Elementary School disappeared when a new two-story wooden school building, with six classrooms, was completed. The open-air classes had been held for three years. On the anniversary of the school’s founding, observed in late January of this year, Susumu Noda, 56, the current principal, shared the history of the open-air classes with the students. “We must never engage in another war,” he concluded. “Fifty years have passed since the end of the war,” he explained later, “so I wanted them to know about the history of our school.”