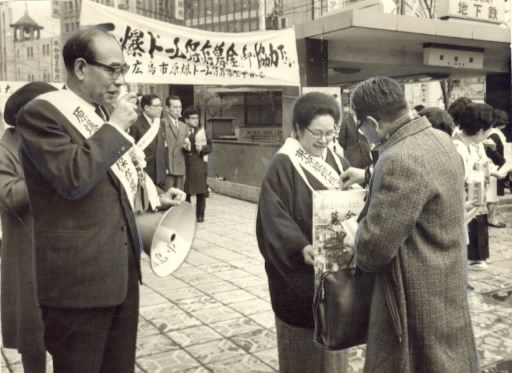 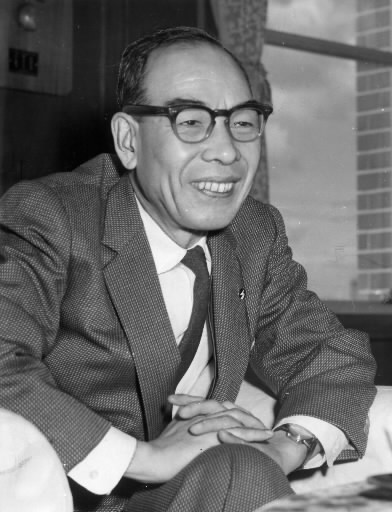 Mayors and local government I
by Masami Nishimoto, Staff Writer

Hiroshima’s postwar mayors shoulder the city’s mission and its obligations as an A-bombed city. Six people have served as mayor. Shinso Hamai, the city’s first popularly elected mayor, created the framework for postwar Hiroshima, maintaining that the atomic bomb could lead to the extermination of the human race and laying the foundation for the city’s rebuilding. He oversaw the inauguration of the Peace Memorial Ceremony, the construction of Peace Memorial Park and the preservation of the A-bomb Dome. “We must dedicate ourselves to what has to be done now and forge a path toward peace,” he said. This article looks at Mr. Hamai’s wishes, which still prevail today, and the calls for peace issued by the mayors who succeeded him in their peace declarations. Also, Hitoshi Motoshima, former mayor of Nagasaki, was asked about his view of Hiroshima from Nagasaki.

While sometimes wavering or coming in for criticism amid the changing times, Hiroshima’s mayors and the local government have continued to work toward peace, and those efforts represent the history of Hiroshima’s citizens as well.

Shinso Hamai, the standard bearer for Hiroshima’s reconstruction, was nicknamed after an old tonic. Foul-mouthed members of the city council called him by that trade name, likening him to a product that did neither harm nor good and was altogether useless. That was because “he wasn’t under the thumb of the most powerful city council members,” said Toru Kanei, 74, a former reporter for the Chugoku Shimbun, who was privy to what went on behind the scenes of local government as Hiroshima grew to a city of 1 million.

In 1955, the tenth anniversary of the A-bombing, at the urging of Mr. Kanei, Mr. Hamai published his private papers in the Chugoku Shimbun in a 74-part series titled “Untold Stories of the City Government.” “Mr. Hamai was the same when responding to questions at city council meetings,” Mr. Kanei recalled. “He didn’t leave it up to his subordinates. He had his own way of saying things and his own beliefs.”

But the path of the “A-bomb mayor,” who was called upon to lead local government and proclaim a vision for the city, was thorny.

Mr. Hamai was born in Hiroshima in 1905. After graduating from the junior high affiliated with Hiroshima Higher Normal School and Hiroshima First Middle School (a five-year school, now Kokutaiji High School) he went on to Tokyo Imperial University. He had no hope of pursuing anything beyond that. Then he lost his father, who was a civil engineer, and just before graduating from college Mr. Hamai got tuberculosis. After working for the Hiroshima Chamber of Commerce and Industry, he went to work at city hall as a clerk at the age of 30.

During the war he was in charge of feeding more than 300,000 citizens as head of the city’s rationing department. One episode from those days is included in a collection of reminiscences of Mr. Hamai compiled after his death. “When I gave Mr. Hamai some bread that I’d been given by the Kempeitai (military police corps) as an expression of gratitude, his expression completely changed and he said, ‘What are you doing with this when there’s no food?’ He was very strict.”

On the day of the atomic bombing as well, he demonstrated his disciplined approach toward his duties. He hurried to city hall, which was ablaze, and starting the next day went around distributing rice balls made by people in rural areas.

At the end of the year he was made deputy mayor, and in April 1947 he became the first popularly elected mayor. Retired city employees who worked in the secretarial section over the years were unanimous in stating that they could never get enough time off, even at New Year’s. That’s how hard Mr. Hamai worked for the rebuilding of Hiroshima.

At a 1953 meeting of the Hiroshima Junior Chamber, Mr. Hamai stated that behind his desire to rebuild and construct a city of peace was his wish to create an ideal city as a tribute to the victims of the A-bombing.

But Mayor Hamai’s ideas were not embraced without resistance. In those days it was all most people could do to survive from one day to the next.

When construction work on the Peace Memorial Museum was stalled because of a lack of funds, the building was derided as a “bird cage.” In city council meetings the proposed Peace Boulevard was condemned as a boondoggle. When Mr. Hamai ran for his third term in 1955, he suppressed his mortification when Tadao Watanabe launched into a rant saying that the boulevard, which was to be 100 meters wide, should be only 50 meters wide and that the area should be residential. “Untold Stories of the City Government” was written shortly after this to record the city’s history in the 10 years following the A-bombing.

“He couldn’t bluff people even in an election campaign,” said Yukihiko Murakami, 77, a former city employee who served as Mr. Hamai’s secretary during the Occupation. “He was a very upright man.” Mr. Murakami served as guarantor when Mr. Hamai borrowed money from the agricultural cooperative for his losing campaign.

While out of office, Mr. Hamai, who had a son and three daughters, supported his family by teaching at a girls’ high school. But even during those discouraging days, he accepted the post of chairman of Hiroshima’s preparatory committee for the first World Conference against A & H Bombs and called for “no more war, no more Hiroshimas.”

In 1959 he beat the incumbent and resumed the post of mayor. Citizens pinned their hopes on Mr. Hamai’s abilities as mayor to address urban development, which was impeded by problems resulting from the city’s growing population, such as trash disposal and illegally built structures. But in his second eight years as mayor, Mr. Hamai’s name became known throughout Japan, primarily because of his 1966 campaign to raise funds for the preservation of the A-bomb Dome.

After the war, every year around the time of the anniversary of the A-bombing there was debate about whether to preserve or tear down the A-bomb Dome. Meanwhile the structure faced the danger of collapse as the result of damage from exposure to the elements.

“We want to make the dome a signpost to the future,” said Mayor Hamai as he clutched a microphone on the streets of the Sukiyabashi area of Tokyo and sought donations for the dome’s preservation. The fundraising drive quickly spread throughout the nation, and donations were received from more than 1.3 million people.

In May of 1995 the dome’s designation as a national historic site was effectively decided on, and it is certain to be recommended for inscription on the UNESCO World Heritage list. There are those who, upon reflection, attest that it was Mr. Hamai who consistently worked for the preservation of the dome.

But for a long time Mr. Hamai repeatedly said he did not believe preservation of the A-bomb Dome was worth spending money on. Why?

At a meeting of the city council in March 1967, just before he left office, Mr. Hamai said, “One reason I hesitated [to preserve the dome] was that most of the A-bomb survivors strongly felt that reminders of that terrible time should be removed as soon as possible.” He was also concerned that the A-bomb Dome would be regarded as a hated relic.

Kazuo Matsushita, 82, a former city council member, stood with Mr. Hamai on the streets of Sukiyabashi for the fundraising campaign that winter. “He was the sort of person who sometimes went ahead with things without considering them carefully,” Mr. Matsushita recalled. “Once he decided that the dome should be preserved, he called for support against the objections of those who were concerned about whether the fundraising effort would succeed.”

Like the source of his nickname, and as one who couldn’t bluff people even during an election campaign, Mr. Hamai was a serious person. He called for peace in a low-key way and was down-to-earth. He was earnest, cautious and, although he didn’t like to show it, a warm-hearted person.

He provided “scholarships” to A-bomb orphans out of his own pocket. One of the recipients, Etsuko, 57, moved to West Germany and has lived in Spain since her husband was transferred there. “I went to college in Tokyo, and one of my high school teachers was worried because I ran out of money to cover my school expenses. So he talked to Mr. Hamai, and he supported me,” she recalled in an interview by international phone call. “I’ll never forget when I met him and what a gentle person he was.”

When asked in a 1965 interview about the role of the mayor of Hiroshima, Mr. Hamai replied that it was “to faithfully convey to the world the views of the citizens of Hiroshima.” This belief, which he maintained throughout his life, was rooted in Mr. Hamai’s own experience of the A-bombing.

“I suppose it was fate that he survived the A-bombing,” said Mr. Hamai’s wife, Fumiko, 81, at her home in Hiroshima’s Saeki Ward. “He should have ended up like my parents.” She went on to give an account of that fate.

After their marriage, the couple lived with Fumiko’s parents, who were fruit wholesalers in Eno-machi, near what became the hypocenter of the bombing. On the day before the A-bombing a Buddhist memorial service was held for Mr. Hamai’s nephew at his mother’s home in Oko (now part of Minami Ward). When the air raid warning was lifted at city hall on the morning of the A-bombing, Mr. Hamai, his wife and children went not to Eno-machi but back to his mother’s home and thus escaped being killed in the bombing.

“Groups of people were wandering around the burned-out ruins… I never found out what happened to my mother-in-law, my uncle or my aunt… I heard that someone had seen them, but before I had a chance to ask him about my relatives he died of radiation sickness,” Mr. Hamai wrote in “The Untold Story Behind the City’s Administration.”

The sight of dead bodies everywhere was etched in Mr. Hamai’s mind. When his white blood cell count fell to half the normal level, he got through it with autologous transfusions, and took charge of things. Mayor Senkichi Awaya and many other high-ranking city officials as well as Mr. Hamai’s subordinates were killed in the A-bombing. He had no choice but to make decisions and take action.

“He was hard on himself and a very serious person,” said Fumiko. Perhaps it was an effect of the A-bombing, but whenever he wore a wristwatch it gave him a rash. He never failed to take advantage of the health checks offered by the Atomic Bomb Casualty Commission. He was a smoker who always had a can of Peace cigarettes at hand.

On February 26, 1968, one year after he had stood in Sukiyabashi seeking donations for the preservation of the A-bomb Dome, Mr. Hamai died of a heart attack. He was at the Peace Memorial Hall and had just announced his intention to run for a seat in the upper house of the Diet. He was 62 and still in the prime of life.

The inscription on his gravestone in the municipal Takamagahara Cemetery reads, “Rest in peace,” a line taken from the inscription on the cenotaph for the A-bomb victims. In “The Untold Story Behind the City’s Administration,” Mr. Hamai recalled his response when debate arose over who committed the “evil” referred to in the inscription. “Both sides must apologize for the wrongs that must be apologized for and strive to ensure that the evil is not repeated,” he said. “That is the only path to peace and the best tribute we can pay to the memory of the victims of the war.”