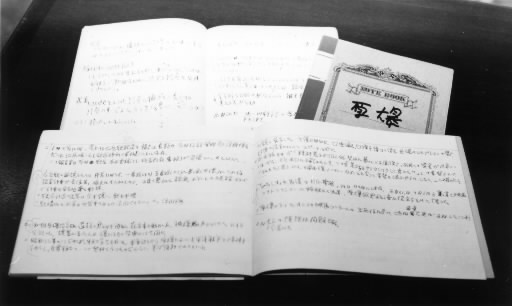 There is not a wealth of literature or films dealing with the atomic bombing, in terms of either quantity or content. The author Masuji Ibuse once wrote, “A major event like Hiroshima is far too big to be the subject of a literary work. There’s too much material.” Nevertheless creative artists have attempted to capture the human condition on paper and on film through the atomic bombing.

One of those creative artists was Toshiyuki Kajiyama, who enjoyed a reputation as a popular writer. From the days of his literary youth in Hiroshima, he struggled to depict the atomic bombing, but he died without having fulfilled this secret ambition. Just after the atomic bombings, Japanese film companies made documentaries of Hiroshima and Nagasaki that recorded the devastation of those cities. For many years these documentaries were referred to as “phantom films,” and the Japanese-language versions are still subject to censorship by the Japanese government.

Some aspects of the atomic bombings are still coming to light, and just as the suffering continues, there will be no “The End” when it comes to works on the theme of the A-bombings. For that reason there is still a need to create them.

When Toshiyuki Kajiyama opened the envelope, which bore no return address and merely said “Tamiki Hara,” he discovered a letter written on a page and a half of manuscript paper in neat handwriting. It was titled “To my young friend.”

“Besides you, I know two or three other people who want to write about what happened then. It seems everyone wants to write about it,” the letter began. Mr. Hara closed by saying, “This is the first and last letter I will write to you. Take care.”

According to his own records, Toshiyuki Kajiyama received this letter from Tamiki Hara on March 19, 1951. The solitary writer, who crystallized the A-bombing experience in his novel “Summer Flowers,” had committed suicide by throwing himself in front of a train in Tokyo only six days before, late on the night of March 13.

At the time, Mr. Kajiyama was a 21-year-old student in the Japanese literature department of the Hiroshima Higher Normal School (now Hiroshima University). With some friends he had started a literary coterie magazine called “Amanojaku,” and with their second edition they had sent out a survey to a group of prominent writers asking what sort of articles they would like to see in the magazine. A short reply was received from Tamiki Hara. That was the extent of Mr. Kajiyama’s acquaintance with him.

But this uncelebrated young lover of literature put his innate energy to work to pay tribute to the memory of the poet and writer he had never met by erecting a monument to Tamiki Hara in Hiroshima.

Hiroshima resident Seiichiro Iwasaki, 64, worked on “Amanojaku” and is now editor of “Aki Literature.” “In those days Tamiki Hara wasn’t very well known, even in Hiroshima, and I doubt that Kaijiyama had read any of his works,” he said. “So the letter was completely unexpected, and Kajiyama was very moved because Mr. Hara even offered literary advice.”

Mr. Kajiyama went to Tokyo and visited writers who had known Tamiki Hara. He told them about his plans to erect a monument and sought their cooperation. He lobbied for the formation of a committee to seek support for the erection of the monument to include officials from the city and prefectural governments of Hiroshima and busied himself raising money and meeting with people in Tokyo.

The monument to Tamiki Hara, which has since been redone and relocated to the east of the A-Bomb Dome, was unveiled in November of that year at the former site of Hiroshima Castle in a ceremony that was attended by Haruo Sato and others.

Mr. Kajiyama chose the day of the unveiling ceremony to launch an effort to combine various literary coterie magazines into a new magazine called “Hiroshima Literature.” He served as both its editor and publisher, and his home was the office of the Hiroshima Literary Association. He called on the young writers who had gathered to put out the magazine to form an “Atomic Bomb Literature Society.”

The society provided an opportunity to consider the A-bombing as a problem in representation rather than as the subject of ideological discourse. “This achievement should be more highly appreciated,” said Mr. Iwasaki. In later years, when he worked as a reporter for weekly magazines, Mr. Kajiyama was known for getting scoops such as when he broke the news of the crown prince’s engagement to Michiko Shoda. That talent was already being demonstrated at this time.

Hitoshi Kokubo, 65, a Hiroshima resident and writer, was a member of the society. While acknowledging Mr. Kajiyama’s energy, he also had this to say: “Most of those in Hiroshima who wanted to become writers addressed the A-bombing as a natural disaster that demonstrated the evanescence of life. They had no notion of turning it into a system of thought or universalizing it. Kajiyama was the most averse to that sort of abstract debate.”

It was more a literary question than a question of Mr. Kajiyama’s nature, and one that continues to be debated today. The society was short-lived, but in 1953 the writers living in Hiroshima conducted a wide-ranging debate on “atomic bomb literature” in the pages of the Chugoku Shimbun. But even then there were no written contributions or any particular comments from Mr. Kajiyama, who was well known as the editor of “Hiroshima Literature.”

Mr. Kajiyama could not go to work for a newspaper company as he had hoped because not long before he graduated from college he was found to have pulmonary tuberculosis. Instead he went off to Tokyo and virtually disappeared. While working at various jobs, such as managing a coffee shop and editing a trade paper, he wrote serious literary works on the theme of the atomic bombing and produced outlines for others.

His works on the A-bombing, such as “Experimental City” (1954), which featured the Atomic Bomb Casualty Commission, and “The Criminals Who Dropped the A-bomb” (1955), which was written in the form of a trial, either received terrible reviews or were completely ignored. Only his 1958 work “The Mist of Hiroshima” was made into a radio drama and took third prize in a literary competition.

He was determined to write “a gem of a short story” or to make his living as a professional writer, but he idled away his days in literary aimlessness.

Prior to the high-growth period of the 1960s, many publishing companies launched weekly magazines. Mr. Kajiyama pitched his services to them and became a freelance writer, going from a literary youth to a reporter.

Heading up a group of freelance writers who were notorious in the publishing industry, he got a series of scoops. But then his tuberculosis returned. “The Black Test Model” (1963), the industrial spy novel that he wrote while hospitalized, became an instant best-seller, and Mr. Kajiyama soon became a popular writer and the top-earning writer in Japan. He began dashing off pornographic novels as well and was hailed as a brilliant writer of literature about sex.

Kajiyama forcibly melded the A-bombing and sex, two themes that are totally different, in his 1971 novel “Keloid Double Suicide.”

The plot involves a reporter for a weekly magazine who encounters the double suicide of a woman whose face was scarred by the atomic bombing and her older brother. He pursues their story and discovers that they secretly lived as a married couple. Mr. Kajiyama encountered fierce protests from A-bomb survivors’ organizations, cultural organizations affiliated with political parties and others, who protested that the book would “trample on the feelings of atomic bomb survivors.”

Mr. Kajiyama described his intent this way: “I wanted to arouse public sentiment with a powerful theme. The atomic bomb survivors on the fringes of society cannot be helped merely by an idealistic ‘holy Hiroshima’ point of view. I wanted to write about Hiroshima in a way that ordinary people could feel keenly and get the public to focus on the reality of the A-bombing.” But he could not gain the public’s understanding. There was no move to debate the book from a literary standpoint either. Its image as a tainted work merely grew.

Tokyo resident Minoru Sakata, 65, was a classmate of Mr. Kajiyama’s when they were in elementary school in Seoul. Hiroyuki Itsuki was a few grades behind them. They left Korea with their families after the war, and Mr. Sakata also attended the Hiroshima Higher Normal School.

He holds Mr. Kajiyama’s works in high regard. “Emptiness and substance. Kajiyama was a man who had been deprived of his hometown, and he viewed the world with its polite face stripped off,” Mr. Sakata said. “Approaching the A-bombing from the standpoint of people’s lust is also literature. This notion is taboo – or rather unacceptable – in Hiroshima.”

The book that is regarded as Mr. Kajiyama’s masterpiece, “Shadows of the Yi Dynasty,” is a “genealogical book” that depicts the sadness of the Korean people under Japan’s colonial rule. The book was written with warmth and was made into a movie in South Korea.

Mr. Sakata described Mr. Kajiyama’s writing as a mixture of nihilistic decadence and healthy cheerfulness. “He was determined to write about the A-bombing, but he couldn’t say no when he was asked to help and was overworked by members of the news media, who seemed to call on him whenever they were in a pinch.

Kajiyama handled requests from the news media to write more than 1,000 pages a month, gathered previously unknown literary materials, and published and managed a literary magazine. His health was always delicate, and his prose was sloppy. He also drank heavily. Nevertheless Mr. Kajiyama declared that he was going to produce the “work of his life” and proceeded with the preparations for his new novel “Thunderclouds.”

This work was to be set in Hawaii, the birthplace of his mother, who had immigrated to Japan; in South Korea, where Kajiyama was born and raised, and in Hiroshima. Under the plan prepared by Shinchosha, the publisher, Mr. Kajiyama was to write two volumes a year over a period of 10 years. He wrote that the theme of the work would be “ethnic bloodlines and peace for humankind.”

But progress came to a halt when Mr. Kajiyama had written only the first chapter of the first volume titled “G Village, Saeki County, Hiroshima Prefecture.” In May 1975 he died after coughing up blood in Hong Kong, where he had traveled to cover a story. Strangely, he was the same age as Tamiki Hara was when he died: 45.

Mr. Kajiyama’s wife, Minae, 64, shared good and bad times with him since his years in Hiroshima. “He wanted to focus on writing ‘Thunderclouds’ and get back to his original aim,” she said. She has three yellowing college notebooks that Mr. Kajiyama is believed to have kept with him from the time he moved to Tokyo.

“Atomic Bombing” is written on their covers, and they are filled with notes and impressions from interviews, news reports, and snippets from accounts of A-bombing experiences. They also include what seem to be titles of novels such as “Black Rain,” “Enola Gay” and “The Atomic Bombing and Sex,” which have may have been intended for use in “Thunderclouds.” Minae has no idea now. The 8,000 documents and other materials that Mr. Kajiyama collected for the writing of “Thunderclouds” were donated to the University of Hawaii, where they are available to researchers.

In his letter to Mr. Kajiyama, Tamiki Hara wrote, “Literature is, after all, a thorny path.” Mr. Kajiyama followed that path in his own way and struggled as he did.

A monument to Toshiyuki Kajiyama stands on the banks of the Honkawa River, near the site of his home in Hiroshima. It is inscribed with a phrase he was fond of: “Flowers are silent.”