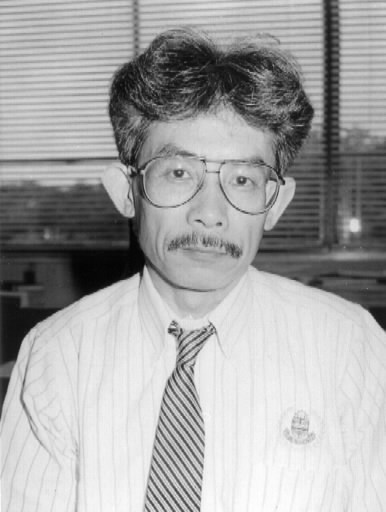 Nuclear development and disarmament I
by Masami Nishimoto, Staff Writer

After sitting down to a splendid feast he had dreamed of, Damocles looked up at the ceiling to see a sword suspended by one hair. This Greek legend illustrates the dangers that accompany prosperity. Fifty years have passed since nuclear weapons were developed and used. Throughout that time the world has truly been under a “sword of Damocles.” During the Cold War between the East and West camps led by the Soviet Union and the United States, the human race was exposed to the risks posed by weapons with more than 1 million times the destructive force of the atomic bomb that was dropped on Hiroshima. The shift from this frenzied nuclear arms race to disarmament has finally begun, but the scrapping of even a single nuclear weapon carries a heavy “negative legacy.” Mitsuru Kurosawa, a professor at Osaka University who specializes in international disarmament law, and Ryukichi Imai, who has served as ambassador to the Conference on Disarmament in Geneva, were asked about the path to the abolition of nuclear weapons and Japan’s role in that effort. Their strong, sometimes caustic comments demonstrate that the path to disarmament remains rocky, and they attack the weakness of the “peace viewpoint” under which merely advocating the cause is enough. This is a challenge that Hiroshima must overcome.

The following is the summary of an interview with Professor Kurosawa.

With the end of the Cold War, the framework for nuclear disarmament negotiations changed. During the Cold War, Japan was under the “nuclear umbrella” of the United States because of the threat posed by the Soviet Union, so it couldn’t do anything. That East-West framework has collapsed, and now Japan has a free hand. I think what will be or should be helpful in moving nuclear disarmament forward is the industrialized nations that don’t have nuclear weapons.

That’s because I saw the Review and Extension Conferences for the Nuclear Non-proliferation Treaty (NPT) at United Nations headquarters in New York, and the interest of non-aligned nations, who played a central role in nuclear disarmament during the Cold War, has shifted to the security of individual regions. Although they had greater numbers and could have united in opposition to the indefinite extension that the nuclear-weapon states advocated, they didn’t.

In evaluating the indefinite extension of the NPT, we must look at what happens to the Comprehensive Test Ban Treaty (CTBT) by 1996. I get the sense we were “deceived” by China’s nuclear tests and France’s statement that it would resume conducting them. But the treaty is the symbol of nuclear disarmament, and it is highly likely that it will be adopted. There is also the commitment to the countries that have agreed to the extension.

But, rather than the number of nuclear weapons or their imbalance, the real problem with the NPT regime is the fact that their use is not prohibited. We must create a treaty with the legal binding power to prevent NPT signatory nations that do not have nuclear weapons from using them. This sort of passive security, which includes no first use of nuclear weapons, is the obligation of the nuclear-weapon states.

And in order to achieve this, we have to create nuclear weapon-free zones throughout the world. It should be possible to establish a treaty this year in Africa as has been done in Central and South America and the South Pacific. The countries of Southeast Asia are also eager to have such a treaty. We should also create one between the Korean Peninsula and Japan. We can surround the nuclear-weapon states this way. Compared to Europe, ensuring the security of East Asia as a whole is difficult in some ways, but it is possible to create a nuclear weapon-free zone over a small area and then expand it. There would be fewer problems that way.

By creating non-nuclear-weapon states and zones where nuclear weapons can not be used, we can reduce and ultimately eliminate the theoretical basis for possessing nuclear weapons in order to supplement conventional weapons and their political significance.

But there is a preliminary stage before we can embark on that path to the abolition of nuclear weapons: the conclusion of the CTBT and the Fissile Material Cut-off Treaty, the implementation of the Strategic Arms Reduction Talks (START) 2 between the U.S. and Russia and the start of negotiations for START 3. If the U.S. and Russia don’t cut their arsenal of strategic nuclear weapons to around 1,000, China, France and Great Britain won’t participate in nuclear arms reduction negotiations.

So, as an industrialized nation without nuclear weapons, what should Japan do? Japan must exert more pressure for transparency on nuclear weapons and the disclosure of information. Japan should propose to the U.N. and the International Atomic Energy Agency (IAEA) the creation of a system for keeping a count of the actual number of nuclear weapons and for the registration of fissionable materials. That will also dispel the “nuclear suspicions” of other nations arising from Japan’s plan to use plutonium for nuclear power.

The Foreign Ministry talks about Japan having a permanent seat on the U.N. Security Council, but they don’t clearly say why Japan wants a permanent seat. The fact that Japan’s bill (financial burden) is large is not a good reason. Japan should destroy the notion that Security Council members must be nuclear-weapon states and take a stronger position promoting nuclear disarmament on behalf of non-nuclear-weapon states.

But Japan has no friends to help with its diplomacy. Japan conducts all its foreign policy with the U.S., and when the U.S. puts pressure on Japan it backs down. Japan is not conducting multilateral diplomacy. So we need to join with Canada and Australia, which have experience and which are, in a broad sense, our allies, and jointly submit a proposal on nuclear disarmament. It is becoming increasingly important to make friends.

Japan has experienced atomic bombings, so it is in a position to advocate nuclear disarmament. And anti-nuclear sentiment is deeply rooted among the people of Japan. But in working toward disarmament during the Cold War, the peace movement was emotional and short on specifics. They just called for the ultimate goal of the abolition of nuclear weapons. They skipped discussions, and they didn’t study the issues either. Participating in discussions does not mean that you approve of the existence of nuclear weapons.

Non-governmental organizations overseas have actively made proposals to their governments and gotten them to implement them. In Japan as well we’ve seen results on issues such as human rights. Times are changing, and I believe that if the government and the peace movement cooperate with each other it will provide a tremendous boost toward achieving the goal of the abolition of nuclear weapons.