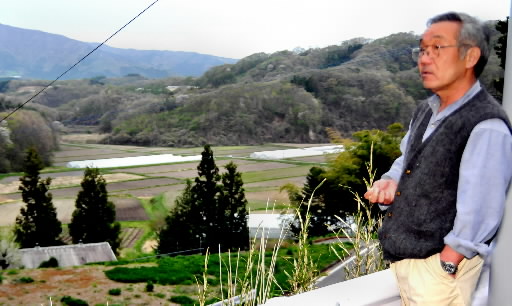 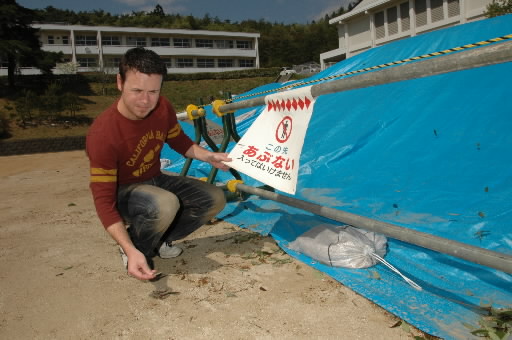 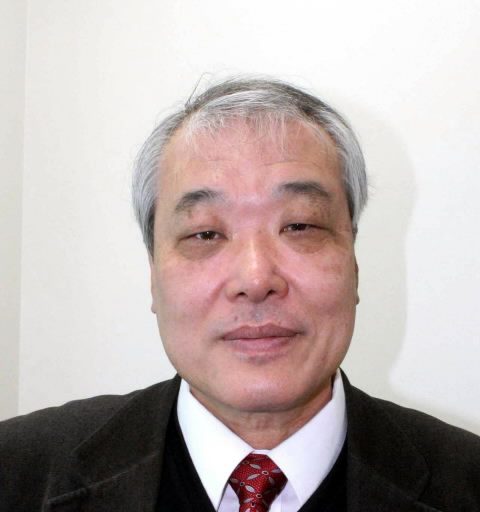 by Seiji Shitakubo, Yoko Yamamoto and Yo Kono, Staff Writers


Residents of Fukushima face fallout from nuclear plant
Since March 11, radioactive materials have continued to leak from the Fukushima No. 1 (Daiichi) nuclear power plant. The horror of invisible radiation is fueling anxiety among the local people in the large area that has been affected by the accident. One of the main concerns is contaminated soil: “When will we be able to grow rice again?” “Is it true that the level of radiation is safe for our children?” The residents are struggling to protect their families and their communities. Meanwhile, due to competing opinion within the national government and among experts, the government has been unable to indicate a clear direction in policy. The city of Hiroshima was successful in its reconstruction efforts after the atomic bombing, despite rumors that no grass or trees would grow in the city for the next 75 years. For the people in the affected areas, hopes are high that Hiroshima can lend support to overcome its plight, based on the expertise it has accumulated over the years.


When can contaminated fields be farmed again?
“They say it’s contaminated, but you can't see radiation,” murmured Yoshihiro Kanno, 60, a rice farmer in Yamakiya, an area in the town of Kawamata in Fukushima Prefecture. This area lies within the “planned evacuation zone,” from which all residents must evacuate by the end of May. With two hectares of rice fields, Mr. Kanno is the largest rice farmer in this community.

Normally, this would be the busiest season of the year, but now no one is working the field of leaf tobacco, a major industry in Fukushima Prefecture. In addition to rice, Mr. Kanno has grown tomatoes for about 30 years, delivering them to a leading manufacturer for processing, but since the accident occurred, that contract has been discontinued. The manufacturer sent him a notice which read: “The safety of your products cannot be confirmed.”

The area is outside the off-limit “caution zone” established within a 20-kilometer radius from the nuclear power plant. However, as cumulative radiation levels were high, on April 22 the national government designated this area a “planned evacuation zone.” At the same time, the government ordered a “restriction on planting rice,” which is a virtual ban on rice production this year, covering a total of about 10,000 hectares of land including the “emergency evacuation preparation zone.”

The reason for the ban on rice production is to prevent the circulation of contaminated rice in the market because radiation that has fallen to the ground may be absorbed through the roots of rice plants. This order has affected about 7,000 farmers in 12 municipalities. In Kawamata, Yamakiya is part of the restricted area.

The figure of 5,000 becquerels was calculated based on data collected by the National Institute for Agro-Environmental Sciences (Tsukuba, Ibaraki Prefecture) through an ongoing nationwide study that has been conducted on cesium-137 in the soil of rice paddies and harvested rice. The study was initiated in 1959 when radioactive fallout was observed in Japan as a result of continuous nuclear testing in the world.

“It’s so painful to see that other rice fields are being tilled to plant rice,” said Mr. Kanno. Before his eyes, beyond the untouched fields, lies the dark soil of the freshly tilled rice fields. The area of Nihonmatsu, which borders Kawamata, is located outside the restricted zone for rice planting. The residents of Nihonmatsu are not obligated to evacuate, either. The great gap between the boundaries of the two municipalities is difficult for Mr. Kanno to bear.

No one has told him when it might be possible for agriculture to be resumed in his area. Anxiety in his voice, Mr. Kanno said, “When will the soil of my rice fields be safe again for planting? We've made on our lives on rice farming. If this goes on, our whole village will collapse.”

Agriculture of Fukushima Prefecture
The agricultural output of Fukushima Prefecture in 2009 was 245 billion yen, the 11th largest of Japan's prefectures and the second largest in the Tohoku District after Aomori Prefecture. The prefecture has a wide swath of agricultural land, where various farm products are cultivated, including rice, pears, cucumbers, tomatoes, green beans, and leaf tobacco. Peaches, mainly grown in the Fukushima Basin, total about 20 percent of the peaches produced in Japan. Livestock farming accounts for about 20 percent of the prefecture’s agricultural output.


Family anxious over safety of children at home, too
Is the sandbox in the yard safe?
Adrian Leis, 35, an Australian who lives in the city of Date in Fukushima Prefecture, noticed that I had a Geiger counter for measuring ionizing radiation and asked me if he could borrow it. “I have three small children,” he said. “I want to measure the radiation levels at my home.”

Mr. Leis has lived in Japan for 15 years. He teaches English as a lecturer at the Miyagi University of Education in Sendai. He and his Japanese wife, 36, have built a house in her hometown, lying in a peaceful valley about 60 kilometers northwest of the Fukushima No. 1 nuclear power plant.

Holding the Geiger counter in his hands, Mr. Leis went in and out of the house. Since the nuclear accident occurred, he has prevented his children from playing in the sandbox in the yard. There, the measured doses were two microsieverts per hour at 50 centimeters above the ground, and three microsieverts at one centimeter above the ground. He peppered me with questions about how to interpret these radiation levels.

The Japanese government has said that the use of elementary school playgrounds are permitted if the level of radiation is less than 20 millisieverts per year, or 3.8 microsieverts per hour (at 50 centimeters above the ground). The radiation levels at Mr. Leis’s home are lower than this, but there remains a risk of internal exposure if, for example, grains of contaminated sand were swallowed. I sympathized with his determination to ensure that his children were kept safe.

According to measurements conducted by the city of Date, the radiation level at 50 centimeters above the ground at the elementary school attended by Mr. Leis's eldest son, 8, was found to be 4.78 microsieverts and 3.96 microsieverts at that of the kindergarten where his second son, 5, is enrolled. As these readings were higher than the limit set by the national government, the city removed the surface soil to a depth of five centimeters from the schoolyards and other areas in late April. After this work, the radiation levels were reduced to one-eighth the original measurement at the elementary school and to one-sixth at the kindergarten.

There is another reason, though, why Mr. Leis is more anxious than most about the radiation.

His grandmother’s younger brother entered Hiroshima as an Australian soldier in the aftermath of the atomic bombing. After returning to Australia, he died of cancer in 1967 at the age of 42. Mr. Leis has not heard the details involving his death, but he recalls his grandmother's expression as she told of her suspicions that her brother's fate was linked to the effects of radiation from the atomic bomb.

When the accident occurred at the nuclear power plant, Mr. Leis was visiting Australia. As he watched television news reports on the crisis, he became deeply concerned. He was hearing such erroneous statements as “Japan and half of Asia will be contaminated with radiation.”

Mr. Leis stressed that the Japanese government and the Tokyo Electric Power Company should immediately release accurate information. The father of three was measuring the radiation level in his children's sandbox with a Geiger counter as his one-year-old daughter watched from inside a closed window. How much is the radiation dose? How much impact does it have on human health? Like any devoted father, he felt frustrated and angry.


Interview with Masaharu Hoshi, professor at the Research Institute for Radiation Biology and Medicine
Soil must be urgently examined across a wide area
The Chugoku Shimbun interviewed Masaharu Hoshi, radiation biophysics professor at Hiroshima University’s Research Institute for Radiation Biology and Medicine (RIRBM) on the importance of examining soil in the affected areas. He has been studying soil contamination caused by the atomic bombing in Hiroshima and by the accident at Chernobyl.

We must examine the soil by the end of May at the latest. If we know how much radioactive material has fallen to the ground, we can estimate the exposure doses of the residents, which will help with the management of their health. We can also grasp the impact on agriculture.

The physical half-life of a radioactive substance means the time required for half of the amount of that substance to decay and lose its radioactivity. With regard to cesium-137, the physical half-life is 30 years, which is quite long. In the case of iodine-131, it is 8 days. However, when the rainy season sets in, these radioactive materials will be washed away, and we won’t be able to obtain accurate data.

In Fukushima as well as in Chernobyl, “hot spots” have been identified. These are the localized areas where radiation levels are significantly higher than surrounding areas. In the case of Fukushima, the town of Iitate is one such site. The area is highly contaminated with radiation due to the wind and rain.

I have been studying where the “black rain” fell in the aftermath of the atomic bombing of Hiroshima. In Hiroshima, too, it seems that the radioactive materials were not deposited in the soil in a concentric manner. A detailed map showing the radioactive contamination must now be created for a wide area of Fukushima. Otherwise the people in Fukushima will be forced to follow our example in Hiroshima, struggling to learn the facts 66 years in the future.


Contamination belt stretches northwest from the nuclear power plant
MEXT and the U.S. Department of Energy have jointly conducted an investigation and released maps which indicate the radiation contamination near the surface of the ground. These maps clearly show that radiation contamination has spread like a belt northwest from the Fukushima No. 1 nuclear power plant. The survey was conducted from April 6 to 29 within an 80-kilometer radius of the nuclear plant, using aircraft which included helicopters, flying at an altitude of about 150 to 700 meters. Highly sensitive radiation detectors were mounted on these aircraft to measure gamma rays.

A belt of contamination with 3 million to 14.7 million becquerels per square meter of cesium-137, whose half-life is about 30 years, stretches from Namie to Iitate. The radiation dose rates in the air were also measured. In the “planned evacuation area” outside the 20-kilometer radius of the nuclear plant, too, the survey identified areas where the accumulated amount of radiation per year will exceed 100 millisieverts.