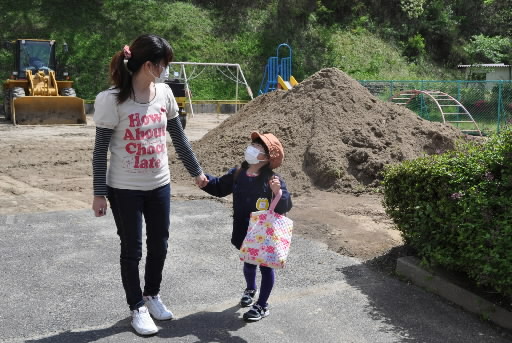 Article 1: Happy voices of children have grown silent
by Yo Kono, Staff Writer


Frightening invisible radiation at school playgrounds
The happy voices of children have disappeared from kindergarten playgrounds over the past two months. They have been replaced by heavy machinery, growling and biting at the ground. Ishii Kindergarten is located about 50 kilometers northwest of the Fukushima No. 1 (Daiichi) nuclear power plant. There, too, the surface layer of soil, contaminated with radiation, was being removed from the playground. Such efforts are designed to prevent repercussions to the health of children in the affected areas.


Efforts to reduce radiation left in the hands of local communities
“The national government says there's little risk as long as the radiation remains under the permissible limit it has set, but what if my daughter should develop cancer?” said Yuko Yamaki, 28, a housewife, who came to pick up her eldest daughter, 5, from Ishii Kindergarten. Ms. Yamaki, appearing extremely worried, walked quickly with her daughter across the playground, where the scraped soil was piling up in one corner. Kyoko Takada, 53, the principal of the kindergarten, was also worried. She said, “We're not sure if we can let the children play outside. Even if the surface of the ground is removed, we can't be certain that the playground is safe.”

On April 19, with the new school year having already begun, the Ministry of Education, Culture, Sports, Science & Technology (MEXT) announced that the acceptable limit of radiation for outdoor activities at kindergartens and schools would be 20 millisieverts per year, or 3.8 microsieverts per hour. (One microsievert is 0.001 millisievert.) This determination was based on a recommendation made by the International Commission on Radiological Protection (ICRP), which said that the range of acceptable radiation exposure, once critical conditions have been stabilized, would be from one to 20 millisieverts per year.


Permissible limit is for adults
Parents and experts, however, criticized the 20-millisievert level, saying, “The ICRP’s recommendation is for adults. It cannot be applied to kindergarten and school children.” Under these circumstances, the city of Koriyama decided on its own to start removing the surface soil, and the city of Nihonmatsu and other local autonomies followed suit.

At Ishii Kindergarten, after the surface soil was removed, the radiation level at one centimeter above the ground was reduced to about one-third from the 3.84 microsieverts per hour observed before the work. According to MEXT, in response to the Chernobyl accident, contaminated soil at the surface was replaced with soil from deeper layers.

At the same time, there are schools where the surface soil has not been removed. Kahoru Watanabe, 43, is worried about her eldest daughter, 9, who goes to an elementary school in the city of Fukushima. “Every morning, it's heartbreaking to see her off,” she said. When the members of her family return home, their clothes are placed in plastic bags. They no longer ventilate the home with fans nor do they use tap water. Ms. Watanabe has even bought a dosimeter, but she remains afraid that, even with all these efforts, she may not be able to safeguard her daughter.


Slow response of the government
Kenji Kamiya, director of Hiroshima University’s Research Institute for Radiation Biology and Medicine (RIRBM), who has been appointed an advisor for Fukushima Prefecture on radiation health risk management, said, “Parents became anxious because the government was slow in initiating concrete measures to reduce radiation exposure.”

The horror of invisible radiation is roiling local communities. Seichi Nakate, 50, the representative of a parents’ organization called the Fukushima Network for Saving Children from Radiation, said with indignation: “Some schools are making the parents submit written consent forms to permit their children take part in club activities outdoors. There is great confusion in these communities largely because the central government hasn't properly addressed such issues, instead leaving them in the hands of local governments.”

The 20 millisieverts per year limit indicated by the national government has also sparked fierce debate among experts. “I cannot accept that this level is being applied to small children,” Toshiso Kosako, a professor at the University of Tokyo, said at a press conference on April 29, in explaining why he was resigning from his role as an adviser to the Cabinet Secretariat.