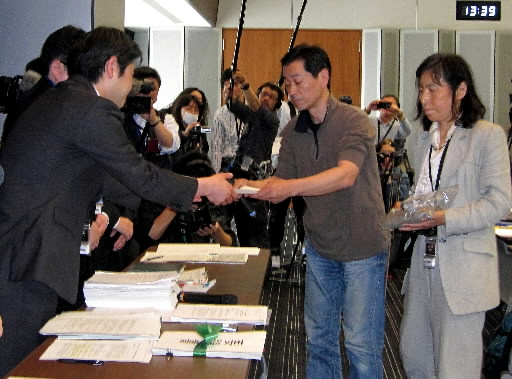 
Disagreements over standard for radiation dose limit
On May 2, about 350 parents and other residents of Fukushima Prefecture crowded into the auditorium of the House of Councilors Building in Tokyo. “We want the soil contaminated by radiation to be removed as quickly as possible,” they said. They pressed a government official of the Ministry of Education, Culture, Sports, Science and Technology (MEXT), among others, for action, placing in front of them some soil that they had taken from a schoolyard in Fukushima.

As a consequence of the nuclear accident at the Fukushima No. 1 (Daiichi) nuclear power plant, radioactive particles fell upon many schoolyards in Fukushima Prefecture. The central government has imposed restrictions on the use of such school yards so that the annual radiation dose suffered by children in the affected areas will not exceed 20 millisieverts. However, disagreements have arisen over the suitability of this standard, even among doctors and government ministries and agencies.

These disagreements were put on symbolic display at the meeting held on May 2. An official of the Nuclear Safety Commission of Japan, who has been charged with the handling of this matter and was sitting next to a MEXT official, declared: “We have not approved the standard of 20 millisieverts of radiation.” The MEXT official grimaced at this remark.

“Who on earth has determined this standard?” said Sachiko Sato, 52, standing aghast. She had come to the venue from the town of Kawamata in Fukushima Prefecture. “It's almost as if they're telling the people in Fukushima Prefecture to use their own discretion in protecting themselves.” She was unable to hold back her indignation.

The standard of 20 millisieverts is based on the value of 1 to 20 millisieverts that was advised by the International Commission on Radiological Protection (ICRP) as a standard that should be applied once the nuclear crisis was brought under control. This standard was used in designating the “planned evacuation area,” among other areas. The ICRP values were determined based on research data involving A-bomb survivors of Hiroshima and Nagasaki.


No scientific basis
However, the differences between the atomic bombings, in which people were exposed to a massive dose of radiation at one time, and Fukushima, in which people are being exposed to low-dose radiation over an extended period of time, remain unclear. In addition, MEXT, referring to internal exposure, explained that “Internal exposure accounts for about two percent of the annual limit of 20 millisieverts, forming only a small proportion of this amount.” In response to a question by a parent from Fukushima, MEXT revealed, “We have made no assumptions about the risks posed by contaminated food, among other things.”

The Physicians for the Prevention of Nuclear War (IPPNW) criticized the Japanese government for its handling of the situation in a letter addressed to Yoshiaki Takaki, the minister of Education, Culture, Sports, Science and Technology. Dated April 29, the letter stated that the radiation level of 20 millisieverts was an “injurious” dose and that permitting exposure to this level was unacceptable. No level is without risk, they warned. On May 12, the Japan Medical Association, too, shared their doubts about the standard, saying, “The scientific basis for the 20-millisievert standard is unclear.”

Even within the government, there are differences of opinion.


Taken as a way to oust Prime Minister Kan
Toshiso Kosako, a professor at the Graduate School of the University of Tokyo stepped down from his role as a special advisor to the Cabinet, calling the standard “unacceptable.” Mr. Kosako's comments have fueled anxiety in the radiation-stricken areas, leading residents to believe: “Professor Kosako is a prominent expert in radiation safety so it must be dangerous after all...”

On May 12, Congressman Seiki Soramoto, a member of the Democratic Party of Japan from Hiroshima’s fourth constituency, presented a written request calling for a review of the 20-millisievert standard to the secretary of the prime minister, along with another parliamentarian. Mr. Soramoto had recommended that Mr. Kosako, his former professor at the graduate school, serve as special advisor. However, some in the political world regard this series of moves as an attempt by the Ozawa faction to oust Prime Minister Naoto Kan.

Yoshio Hosoi, a professor at the Research Institute for Radiation Biology and Medicine, said: “In light of internal exposure, we must protect children at any cost.” Should residents evacuate or take the risk of being exposed to radiation? The government has been unable to provide clear guidance, even with regard to radiation standards by which residents can make their decisions.