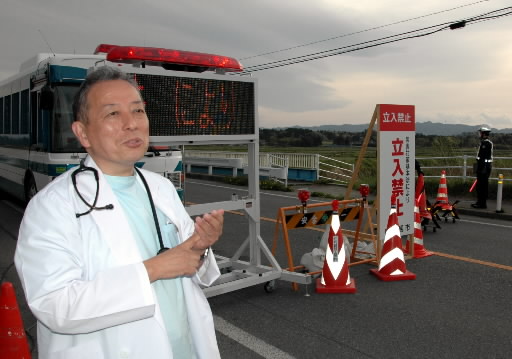 
Residents traumatized by losing their homes
Dr. Ryuzaburo Shineha stood at a roadblock outside the no-entry zone that covers an area within a 20-km radius of the Fukushima No. 1 (Daiichi) nuclear power plant and fought back tears. Dr. Shineha, 58, was born and raised in the town of Namie inside the zone. “My family grave is just 5 km from here, and my parents’ house is 10 km away,” he said.

Namie has always been a farming and fishing town. Dr. Shineha can’t forget the taste of home: the dried baby sardines from the nearby sea. “I may never be able to eat them again,” he said. Water contaminated by radiation has flowed from the power plant into the sea, and high levels of radioactive iodine have already been detected in young sand launce off the coast of Ibaraki Prefecture.

“When it became clear people might lose their hometowns, they realized how important they were to them,” Dr. Shineha said. “The soil has been contaminated and so has the sea…” His friends and acquaintances have had to leave their homes, and he and his wife as well have moved to her parents’ home in Shinchi on the border of Miyagi Prefecture.


Hospital temporarily closed
At the time of the accident, Dr. Shineha was the director of a hospital in Minamisoma, 23 km from the nuclear power plant. On March 13, the day after the plant’s No. 1 unit exploded, the hospital was thrown into confusion. Even the radiology technicians who work with x-rays were flustered and pressed Dr. Shineha to provide them with iodine tablets.

After the accident the hospital’s staff of about 180 doctors, nurses and office workers began to disappear one after another. On March 15, the day the fire broke out at the No. 4 unit, 40 staff members showed up for the morning meeting, but by evening only 12 were left. The hospital’s patients were discharged or transferred to other hospitals, and on March 18 the hospital closed down for two weeks.

Even medical personnel lack a proper understanding of radiation. Dr. Shineha was disturbed by news reports saying that children who had evacuated to the Tokyo area were taunted by some who said others would pick up radioactivity from the children. “People have forgotten about Hiroshima and Nagasaki. We can see this in the government’s slow response and in the harmful rumors about agricultural products,” he said.

He reproaches himself as well. He said that when he was a medical student at Tohoku University he didn’t pay attention in radiology class, which was a prerequisite.


Health survey for H-bomb test survivors
Dr. Shineha began to have a greater awareness of radiation in 2005 when, while an acting professor at Tohoku University Hospital, he was chosen to be a member of a team that conducted a health survey of residents of the Marshall Islands and Bikini Atoll, where hydrogen bomb testing had been carried out by the U.S. He was shocked to find that, although more than 50 years had passed, the residents’ continued to suffer from the effects of radiation.

He said that after the accident at the nuclear power plant he paid attention to the direction and strength of the wind because he immediately recalled the so-called “ashes of death,” the radioactive material that fell on the Japanese fishing boat Daigo Fukuryu Maru (Lucky Dragon No. 5), which he heard about while on Bikini. The same thing had happened to his hometown.

About 77,000 people resided in the no-entry zone around the nuclear power plant. They feel an overwhelming sense of loss at having lost their homes. The dilemma of Dr. Shineha, who has learned the frightfulness of radiation, is apparent. “I wonder how long the elderly can bear the strain,” he said. “But the situation is such that they can’t return to their homes. All we can do is provide mental health care.”