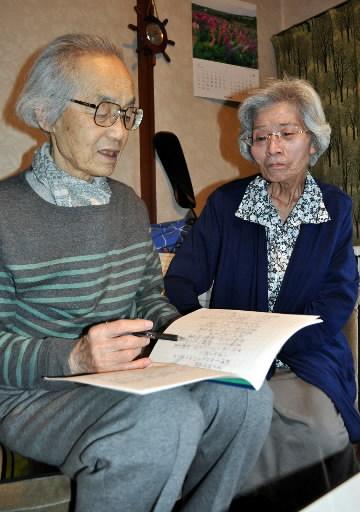 
Horror of invisible radiation is felt again
“I feel the cold spring, driven out of my hometown by an invisible thing.”

This haiku, a Japanese poem of seventeen syllables, was written in a notebook in an evacuation center. With the writer, Masahiro Endo, moving from one shelter to another, he does not recall exactly where the poem was composed. Mr. Endo, 85, looking back on his flight from a radiation-affected area, noted that it was really cold, as he fled with only the barest of necessities. It was snowing then, too. What flashed in his mind at the time was the “black rain” to which he was exposed during his escape from the atomic bombing of Hiroshima. The image made Mr. Endo hurriedly brush away the snow that fell onto his shoulders, as he thought, “This snow must be contaminated, too.”

Sixty-six years ago, he was a soldier in the Japanese army and he experienced the atomic bombing of Hiroshima in today's Nishi Ward, where he was undergoing medical treatment. Originally from the city of Fukushima, he finally settled in Minamisoma City in Fukushima Prefecture, and it was here that he encountered the nuclear crisis of the Fukushima No. 1 (Daiichi) nuclear power plant. “It never occurred to me that I would be terrorized by radiation twice. It's exasperating,” Mr. Endo said, as if choking out the words.


Four A-bomb survivors in off-limit zone
Mr. Endo’s house stands 18 kilometers from the nuclear power plant. Under the evacuation order in the wake of the earthquake, he moved from one evacuation center to another in Fukushima Prefecture with his wife, 82, and their oldest daughter, 56. Now that the area within a 20-kilometer radius from the nuclear plant has been declared off-limits, they have now taken up temporary residence in the city of Sagamihara in Kanagawa Prefecture, turning to an acquaintance of his eldest daughter for help.

According to Fukushima Prefecture, four A-bomb survivors lived in the evacuation zone prior to the accident at the nuclear plant. Mr. Endo and another survivor experienced the atomic bombing of Hiroshima. The other two were exposed to the atomic bombing of Nagasaki. All have been forced to live as evacuees.

Mr. Endo has a particular reason for repeatedly using the phrase “It's exasperating.” After returning to his hometown after the war, he found employment in the town of Odaka (now, Minamisoma City). In the 1980s he was involved in promoting the construction of a new nuclear plant in the area, working to negotiate the purchase of land to build local roads.

Arguing on behalf of the town, he told one landowner: “An atomic bomb and a nuclear plant are two different things. For the future, Japan needs the peaceful use of nuclear energy.” The words now uttered by Mr. Endo reveal his feelings of embarrassment and remorse as he looks back on his actions at the time, wondering what he had done.

The day the atomic bomb exploded, Hiroshima was reduced to ashes due to the blast and heat rays. Meanwhile, speaking about his town now, Mr. Endo said, “Nothing has changed in the areas that weren't damaged by the tsunami.” And, at first sight, there seems to be no change to the mountains, the rivers, and the sea. However, human beings have disappeared, replaced by the invisible radioactive particles that have spread over the land.

Akira Yamada, 84, chair of the Fukushima Prefectural Confederation of A-bomb Sufferers Organizations, experienced the atomic bombing at his home in Minami Ward, Hiroshima at the age of 19. After he began teaching at Fukushima University, he moved to the city of Fukushima and lives there today. He links his life to the lives of young people in Fukushima now. His mother died of stomach cancer about 20 years after she was exposed to the atomic bomb. Mr. Yamada, too, underwent surgery for stomach cancer three years ago. Through the years he has felt a continual concern over his health.


“Ease our anxiety”
Even now, two months after the crisis erupted, the situation at the Fukushima No. 1 nuclear power plant has not been stabilized. Like Hiroshima before it, will Fukushima be able to reconstruct? “I don't want the young people of Fukushima to experience the same sort of hardships as we, the A-bomb survivors, did,” Mr. Yamada said. “I hope the health of the people here will be checked and treated over a long period of time to ease our anxiety.”