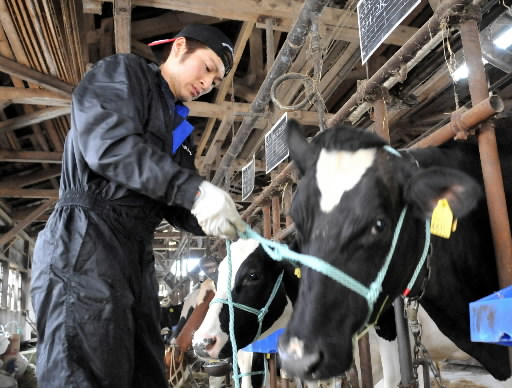 Article 1: Village is “neglected by the nation”
by Seiji Sitakubo and Yoko Yamamoto, Staff Writers


Belief in government announcement leads to false moves
Three months have passed since the nuclear crisis began at the Fukushima No. 1 (Daiichi) nuclear power plant. Originally, the Japanese government and the Tokyo Electric Power Company (TEPCO) repeated such statements as “The nuclear reactors are sound,” and “There is no need to be concerned about radiation.” Now backpedaling is being done with regard to every one of these assertions. How has the nuclear crisis been conveyed to local residents over the past three months? And what are the problems that have arisen in terms of transmitting information? The Chugoku Shimbun will examine these issues through the accounts of 50 local residents of “Hamadori,” or the “Hama Street” area in the eastern part of Fukushima Prefecture, which has suffered severely as a result of the accident at the nuclear plant.

Each year, the reflection of the sky on water-filled rice paddies is a sign of early summer in this region. But this year the rice fields in the village of Iitate in Fukushima Prefecture have become overrun with weeds, and radioactive particles, invisible to the eye, have spread over the area. Now under an evacuation order, Iitate has become a ghost town.

The village of about 6,200 people felt confounded by the information they received regarding the effects of the nuclear crisis at the Fukushima No. 1 nuclear power plant. Expressing indignation, Tadayoshi Sato, 67, a farmer who has stayed behind, said, “Why would the government make such an announcement?”

In the wake of the nuclear accident, the chief cabinet secretary said at a news conference: “The nuclear power plant is under control.” Now, three months since the crisis began, there are no longer any claims that the condition of the nuclear plant at that time was safe. In reality, at an early stage in the crisis, the nuclear reactors had fallen into a dangerous state, suffering a “melt-through.” It was not until more than two months later that this fact became public.


Grandchildren were allowed to play outside
The town office for the village of Iitate is located about 40 kilometers northwest of the nuclear power plant. Though the office is a considerable distance from the plant, radioactive materials were carried to the village by the wind, creating a large number of so-called “hotspots,” areas that have become highly contaminated by radiation. The residents there believed the government’s announcement and were not aware of such conditions. Mr. Sato, too, let his four grandchildren, all under ten years old, play outside for some time after the accident. “If something bad should happen to the health of my grandchildren in the future...” Mr. Sato has felt full of regret since learning the truth.

Rainfall and wind direction affect the emergence of hotspots. The existence of hotspots was revealed through research on the “black rain” of Hiroshima, which had fallen in the aftermath of the atomic bombing, and on the nuclear power plant accident in Chernobyl in 1986. Tetsuji Imanaka, a research associate specializing in reactor engineering at the Kyoto University Research Reactor Institute and a second-generation A-bomb survivor of Hiroshima, entered Iitate in the wake of the crisis. Soon after the accident, he announced the results of his research: “In some places, the amount of radioactive material that has accumulated exceeds the standard set for Chernobyl for a forced evacuation.”

The government, too, had obtained this information through the System for Prediction of Environmental Emergency Dose Information (SPEEDI). However, the information was released about a month and a half after the accident. The government said that it was concerned such news would stir panic among the public.


Regrets about preparing meals outdoors
“The entire village should have been evacuated immediately,” said Yoshimune Hasegawa, 32, a dairy farmer in Iitate. “Why did the government conceal the information?” Mr. Hasegawa is disgusted at the government’s attitude toward the crisis. He has even come to feel that the lives and health of the villagers were neglected by the nation.

At the end of March, the International Atomic Energy Agency (IAEA) announced that the contamination level of soil in the village had exceeded the standard for evacuation. However, at that time, too, the Nuclear and Industrial Safety Agency persisted in viewing the distance from the nuclear plant in a concentric fashion and explained, “We are employing a different method of measurement. Evacuation is unnecessary.”

Mikiko Sato, 60, chair of the women’s association of Iitate, led her group in preparing meals outdoors for about 1,000 evacuees from the cities of Minamisoma and the town of Namie from March 12, the day following the accident, to March 18. It was still snowing lightly at the time and, in the open air, the association gave hot milk to the evacuees.

Later, Ms. Sato learned that many children who drank milk that was contaminated with radioactive iodine following the accident at Chernobyl would come to suffer from thyroid cancer. The ban on the shipments of milk produced in Fukushima Prefecture began as late as March 21. Ms. Sato thinks: “If only they had informed us of the risk much earlier.” The incident has left a splinter in her heart and there is no way to ease the concern she feels.