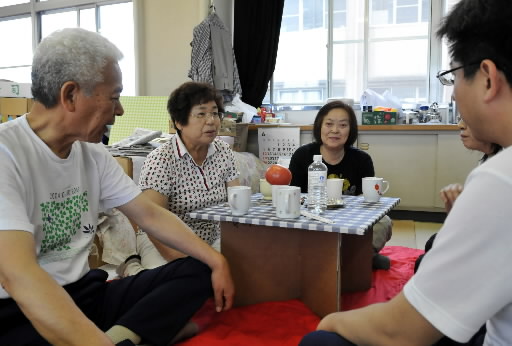 
Seeking refuge for reasons unknown
The classrooms of a former school in Kazo City, Saitama Prefecture are lined with low dining tables and futon bedding; tatami mattresses cover the floors. The evacuees here have tried to regain a daily rhythm in the limited space they have been allotted. The temporary town office for Futaba, the town in Fukushima Prefecture where the Fukushima No. 1 (Daiichi) nuclear power plant is located, has been installed in Kazo City, about 190 kilometers from Futaba. About 1,000 people from the town, comprising just over 10 percent of its residents, now spend their displaced lives in this remote city.


“Evacuate as far to the west as possible”
“When I sought shelter, I had no belongings with me,” said Tomiko Nakamura, 59, the leader of a neighborhood women’s association. She then managed to obtain the minimum daily necessities, including undergarments. With her evacuation persisting for over three months, Ms. Nakamura is showing signs of distress.

The nuclear plant has been in operation for 40 years and was indeed the bedrock of the town's employment and business opportunity. The plant and the community had enjoyed a state of “co-existence and co-prosperity.” However, these mutually-beneficial conditions deteriorated rapidly in the wake of the March 11 disaster. The townspeople were left wondering what was happening and how dangerous the situation was. The Tokyo Electric Power Company (TEPCO) and the central government, which had promoted the nuclear power plant with their banner-waving, did not provide the Futaba residents with sufficient information in the aftermath of the accident. These people cannot help but feel betrayed.

On the morning of March 12, the day after the earthquake struck, an announcement sounded, warning the town: “Evacuate as far to the west as possible.” Hearing this announcement through the wireless speakers which warn the community of emergency conditions, Ms. Nakamura fled to an evacuation site and there came to the realization that the nuclear plant was imperiled for the first time. She had no chance to return to her house, fleeing to another evacuation site by car as if being chased by a pursuer.   Akemi Obata, 44, an employee of an agricultural cooperative, also heard the announcement through the wireless system. Recalling that day, Ms. Obata said, “It seemed to me a rather sweeping evacuation order for a tsunami. But anyway, I took it pretty lightly, thinking the evacuation would last for just a couple of days.” As a result, she brought only warm clothing, a few small blankets, and some video games for her children. She said, “I wasn't informed at all about the reason for the evacuation, the fact that the accident at the nuclear plant was to blame.” She never imagined, either, that their life as evacuees would extend for this long.

Because the evacuation order was issued simultaneously to the municipalities surrounding the plant, the roads became heavily congested. Vehicles which ran out of gas were left unattended there by the roadside and lines of fleeing residents were forced to seek shelter on foot.

Mitsuharu Yatsuda, 70, a member of the Futaba Town Council, joined in efforts to manage the traffic at an intersection where the traffic lights were not functioning. Mr. Yatsuda said, “There were no fire fighters, police officers, or town employees there. I thought panic would erupt if we didn't act.”


Hopes of returning home fade as reality is faced
The residents who lived in the designated “caution zone” within a radius of 20 kilometers from the nuclear power plant have been permitted to make a temporary visit to their homes. Ms. Nakamura returned to her hometown, which had been hit hard by the tsunami. At a place of assembly, she was given some protective gear, a thin, two-piece suit. Her house stands about 5 kilometers from the nuclear plant and she wondered with concern if the suit would truly protect her or not.

Before reaching the town, Ms. Nakamura had thought, “If only I could stay in Futaba when I get there...” But her slim hopes vanished when she came face-to-face with worries regarding the invisible radiation and the reality of the tsunami-stricken community. Thinking she might never be able to live there again, she placed pictures of her grandchildren and some valuables in a plastic bag she had been given for retrieving possessions.

In Ms. Obata's case, she has no intention of returning for a temporary visit for a while. “If I go back, I wonder if I wouldn't really be affected by the radiation. I find it hard to believe that it's safe,” she said. “Even now, I suspect that the central government and the Tokyo Electric Power Company are withholding vital information from us,” she added, revealing the mistrust she now holds.