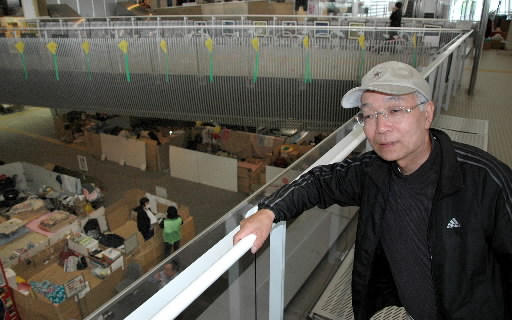 Article 5: Assumptions too optimistic
by Seiji Sitakubo and Yo Kono, Staff Writers


Ignoring possibility of “triple disaster”
Toshiro Kitamura, 66, a resident of the town of Tomioka in Fukushima Prefecture, murmured as if to convince himself: “Building nuclear power plants and speaking to the public about their safety--that's my professional life. Mr. Kitamura is an advisor to the Tokyo-based Japan Atomic Industrial Forum, which is comprised of electric companies and manufacturers of nuclear power plants, among other organizations. He is also one of the evacuees from the areas affected by the nuclear crisis at the Fukushima No. 1 (Daiichi) nuclear power plant.

Due to the power outage caused by the earthquake and tsunami, Mr. Kitamura was unable to watch television or check the Internet. “There are multiple safety measures in place at the nuclear plant,” he thought at the time. “A serious accident can't occur.” Expecting just a minor accident at most, he packed some belongings in a bag. Most of the people who gathered at the evacuation site designated by the town were elderly or were adults with children. Few young people were there. Mr. Kitamura explained, “I learned later that people who had gotten the information through exchanging text messages on their cell phones or through other means apparently fled to locations farther away.”

Mr. Kitamura has been involved in the nuclear industry for more than 40 years. He has worked for nuclear power plants in Ibaraki and Fukui prefectures. His assignments as an employee included engaging in negotiations to secure locations for these nuclear plants and providing explanations about the plants to local residents. When asked about the possibility of a serious nuclear accident, he would answer: “An accident like that might happen once in 10,000 years.”

That sort of serious accident has now occurred.

“Both the government and we, those involved in the nuclear industry, have turned our eyes away from the likelihood of a triple disaster involving an earthquake, a tsunami, and a nuclear accident,” Mr. Kitamura said. “Of course, our assumptions about an accident occurring were optimistic.”


Only two days given for drill
While living at the evacuation center, Mr. Kitamura has come to realize keenly that important information regarding such key questions as “How are things being brought under control within the nuclear power plant?” and “What will become of local residents in the future?” has not been made available to the public. Mr. Kitamura pointed out: “The attitude of the government and the Tokyo Electric Power Company toward concealing information is indefensible. With only optimistic assumptions about an accident occurring, I believe they didn't consider how they would provide accurate information of this sort.”

A drill to simulate a nuclear disaster at the plant has been conducted almost every year. The drill last year was carried out in November under a scenario which involved an interruption to all sources of electricity at the No. 5 reactor at the Fukushima No. 1 nuclear power plant and the leakage of radioactive materials from a chimney. The central government, Fukushima Prefecture, and local communities joined in the drill, but only two days were given to it.

The Emergency Planning Zone (EPZ), which is stipulated in the Fukushima Prefecture disaster prevention plan, covers a radius of eight to ten kilometers from the nuclear power plant. The “offsite center,” which was supposed to serve as a command center in the event of a crisis, is located just five kilometers away. Vital facilities like this were built in close proximity to the plant. The area has now been designated a “caution zone,” or a no-entry zone, within a 20-kilometer radius from the plant. A person from the nuclear power squad of the Disaster Countermeasures Office of Fukushima Prefecture acknowledged, “In the first place, we didn't expect a situation like this to occur.”

As a result of the nuclear crisis, nearly 100,000 people are still forced to live as evacuees. Mr. Kitamura stressed that bringing transparency to important information must be achieved immediately. “Otherwise, people's hearts will only turn away from nuclear energy at an even quicker rate.”