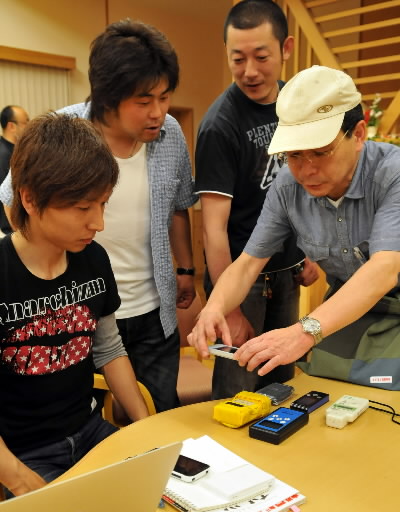 
Survey results should be utilized for the benefit of residents
At the end of May, more than two months after the onset of the accident at the Fukushima No. 1 (Daiichi) nuclear power plant, Kenta Sato, 29, paid a visit to the National Institute of Radiological Sciences (NIRS) in Chiba. Mr. Sato, who runs a business in the formwork industry in the town of Iitate in Fukushima Prefecture, asked the institute to measure his internal exposure to radiation using a whole body counter. Because he had spent a considerable amount of time outdoors even after the accident, due to the nature of his work, he was concerned about possible internal exposure.


Readings not disclosed
However, he was only told that the readings were under the designated limits and no numerical data was provided. When he asked why he was not being given more detailed information, NIRS replied that such result would be impenetrable to the average person. Mr. Sato still feels dissatisfied with this explanation.

Like A-bomb survivors in Hiroshima and Nagasaki, Mr. Sato wants to understand precisely what the impact has been to his body as a result of his exposure to radiation.

In the 1950s, the Atomic Bomb Casualty Commission (ABCC), the forerunner of the current Radiation Effects Research Foundation (RERF), pursued follow-up surveys of about 120,000 A-bomb survivors. While findings of these epidemiological surveys have been utilized for establishing global standards for radiation protection, some survivors held distrust toward the ABCC since they felt that they were used as guinea pigs or they were made subjects of research but were not provided with medical treatment.

The prefectural government of Fukushima has decided to launch a survey in August to monitor the health of 2.02 million residents of the prefecture. The important thing in connection with this effort is that residents should be able to make the most of the findings. The failings of the surveys conducted in Hiroshima should not be repeated.

In the planned survey for Fukushima Prefecture, exposure doses will be estimated through medical interview forms and other means. The survey will be initiated earlier, by the end of this month, for 28,000 residents of areas where high levels of radiation have been recorded, including Namie, the Yamakiya area of Kawamata, and Iitate. Internal exposure doses will be examined for 100 of these residents.

Expertise accumulated by the RERF, Hiroshima University, and Nagasaki University is expected to play an important role. Kenji Kamiya, one of the members of the committee responsible for the survey, is director of Hiroshima University’s Research Institute for Radiation and Medicine and an expert in radiation damage. He said, “Since there are no records of this kind of low-dose, long-term exposure [as in Fukushima], only the accumulated data of Hiroshima and Nagasaki will make it possible to evaluate the effects of such exposure.”


Examine internal exposure dose of all residents
“I hope strongly that the survey will be conducted as soon as possible,” said Takumi Aizawa, 40, a resident of Iitate. The prefectural government employee wants all the 6,200 residents of the village examined for internal exposure, saying, “Everyone is worried about the amount of radioactive substances that have entered our bodies.”

The municipal department, which is responsible for selecting 100 people for the internal exposure examination, has been flooded with inquiries from parents of infants and young children. Teenagers, too, are expressing concern. Aya Kikuchi, 17, a high school student and a resident of Namie, hopes that she will be chosen as one of 100 subjects for the examination, explaining that she hopes to give birth to a healthy baby in the future.

In Iitate, for which an evacuation order has been issued, Mr. Sato said, “Whether we leave or stay here, I want to know what the truth is at this point.”