Fukushima and Hiroshima: Impact on the A-bombed city, Part 3 [2] 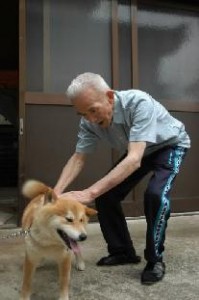 
Caught between anxiety and advantage
Four months have passed since the day the Fukushima No. 1 nuclear power plant spun out of control. Ataru Ikeda, 85, is the only atomic bomb survivor among the residents of the town of Okuma in Fukushima Prefecture, where the nuclear plant is located. He has since evacuated to the home of a friend of his 59-year-old son Tomio, located in Nikaho, Akita Prefecture.

This is not the first time he has faced hardship as the result of a nuclear disaster. The fact that his life has been upended by two such trials is very much on his mind now. On the evening of that first fateful day of August 6, 1945, Mr. Ikeda, who was a member of the former Army Ship Communications Reserve at the time, entered the razed ruins of Hiroshima and spent a week in the city helping to dispose of the dead.

After the war, he returned to Fukushima and worked for the prefectural government. He obtained an Atomic Bomb Survivor's Certificate. Although Mr. Ikeda did not suffer from the aftereffects of radiation, he always carried an uneasy feeling when it came to his health. In fact, four other A-bomb survivors who lived near him eventually died of cancer and other illnesses.


Posing questions to himself since the accident
“I was aware of the horrors of nuclear weapons,” Mr. Ikeda said. “Nuclear energy uses the same technology as that of the atomic bomb to produce power. Even though I sensed the potential danger, part of me believed that an accident just wouldn't occur.”

Since the nuclear crisis erupted at the power plant, he has been asking himself, as an A-bomb survivor, what sort of attitude he should have adopted toward the facility.

Construction on the Fukushima No. 1 nuclear power plant began in 1967 at a location only five kilometers from Mr. Ikeda's house in Okuma. In those days, many residents of the town, which had no industry other than agriculture, welcomed the plant. One sign in the neighboring town of Futaba still reads: “Nuclear Power, Energy for a Bright Future.” At meetings with local residents, representatives of the Tokyo Electric Power Company (TEPCO) made earnest appeals to the effect that Japan was not a country rich in energy resources and that the age of nuclear power generation was now at hand.

Because of the new plant, local roads were improved and public facilities were built; restaurants and shops opened one after another. Most significantly, jobs were created. The population of the town grew by 20 percent, from 7,750 in 1970 to 9,296 ten years later. “The prefectural government was behind the nuclear plant 100 percent,” he recalled. “There was no antinuclear sentiment being voiced back then.”

Mr. Ikeda’s second son, Tomio, landed a job at one of TEPCO’s affiliated companies in 1977. “I didn't know that my father was an A-bomb survivor,” Tomio said. “I was just happy to have a job at a solid company.” Tomio was involved in the transportation and management of radioactive waste at the Fukushima No. 1 and No. 2 nuclear power plants. “My father only told me to be careful about radiation,” he said. Looking back, Tomio now believes that his father was probably feeling uneasy.


Taboo of nuclear power plants
Atsushi Hoshino, 83, secretary general of the Fukushima Prefectural Confederation of A-bomb Sufferers Organization, said that the issue of nuclear power plants has long been taboo. Currently 92 survivors of the atomic bombings of Hiroshima and Nagasaki live in Fukushima Prefecture. Some of them have relatives working for the nuclear plants and others have a financial stake in their existence. The organization has appealed for the elimination of nuclear weapons but has never adopted an explicit policy stating its opposition to nuclear power generation.

The dark side of the peaceful use of nuclear matter has been abruptly thrust into the light. The sight of the hydrogen explosion that took place in the No. 1 reactor is seared into Mr. Ikeda's mind. “The fact that we were manipulated by the promise of 'peaceful use' is shameful,” he said. Yet it cannot be denied that his family and his community have benefited from the plant. To the questions he poses to himself, he has yet to arrive at answers.