Fukushima and Hiroshima: Impact on the A-bombed city, Part 3 [4] 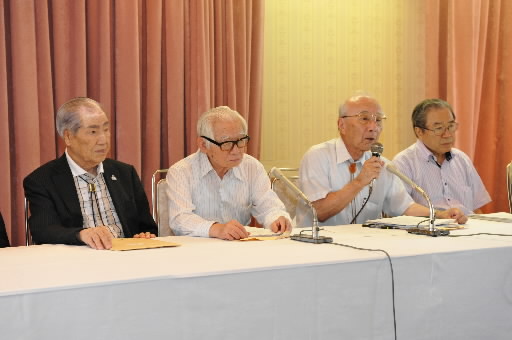 Article 4: Dependence on the NPT
by Yumi Kanazaki and Yoko Yamamoto, Staff Writers


Endorsing use of nuclear energy creates dilemma
On July 12 and 13, the Japan Confederation of A- and H-bomb Sufferers Organizations held a meeting of its executive board in Tokyo. At the meeting, the organization made the formal decision to add efforts to seek “the elimination of nuclear power generation” as part of its policy for this fiscal year.

“We have suffered radiation exposure and the people around the nuclear power plant have suffered radiation exposure, too,” said Hideto Matsuura, 65, the director general of the Ehime Prefecture Atomic Bomb Sufferers’ Association and a resident of Matsuyama City. Mr. Matsuura reported that the organization had requested to the Shikoku Electric Power Company to decommission the No. 1 and No. 2 reactors, which are obsolete, and suspend reoperation of the No. 3 reactor of the Ikata nuclear power plant in Ehime Prefecture. Mr. Matsuura expressed his intention for the organization to join forces in the near future with a local group that opposes nuclear power generation. “Following the policy decision made by the Japan Confederation of A- and H-bomb Sufferers Organizations, we would like to accelerate our action,” he said.

In May 2010, Sunao Tsuboi, 86, co-chair of the confederation as well as chair of the Hiroshima Prefectural Confederation of A-bomb Sufferers Organizations, traveled to New York City, site of the Nuclear Non-proliferation Treaty (NPT) Review Conference. Mr. Tsuboi stood in the forefront at rallies and on other occasions to appeal for the elimination of nuclear weapons.

Today, the NPT is the only multilateral treaty addressing nuclear disarmament. But Mr. Tsuboi pointed to the dilemma raised by this accord, saying, “When we call for strengthening the NPT regime, this leads to promoting nuclear energy. In that sense it's difficult to make this appeal. Even if the number of nuclear weapons decreases, the number of radiation sufferers in the world may nevertheless increase.”

This is because the NPT guarantees signatory nations that they have the inviolable right to the peaceful use of nuclear energy if they agree to refrain from possessing nuclear arms and engage in nuclear non-proliferation efforts.


Squarely facing the issue of nuclear energy
Kazumi Matsui, the mayor of Hiroshima, has expressed his desire to hold the next NPT Review Conference in Hiroshima in the year 2015. Although Mr. Tsuboi appreciates the importance of the NPT, as well as the significance of having world leaders gather in Hiroshima in the year marking the 70th anniversary of the atomic bombing, he gives pause to the words of the late Ichiro Moritaki. Mr. Moritaki, the first chair of the Hiroshima Prefectural Confederation of A-bomb Sufferers Organizations, declared: “The atom and human beings cannot coexist.”

Mr. Tsuboi believes this to be true. “Our appeals cannot continue to depend on the NPT,” he said. “We must carefully consider how we can link the effort to eliminate nuclear power generation with our appeals for eliminating nuclear weapons.”

Toshiko Tanaka, 72, a resident of Hiroshima, has continued to relate her account of the atomic bombing in response to calls from experts in disarmament education in the United States.

In the wake of the accident at the Fukushima No. 1 nuclear power plant, Ms. Tanaka was visiting a high school in New York in May. She talked to the students there about her experience of the A-bomb blast, how she suffered severe burns and was on the brink of death, as well as her thoughts about peace and other issues.

“I was peppered with questions about the Fukushima disaster,” she said. “'What do you think of the accident? Why have the A-bomb survivors tolerated nuclear energy for so long?'”

Ms. Tanaka felt frustrated that she was unable to convey her thoughts clearly. Still, she put across her desire that “There must be no more radiation sufferers.”

“If A-bomb survivors continue sharing their stories, but ignore the issue of nuclear energy, their voices will not be convincing to others in the world,” Ms. Tanaka said. She believes that the international community is asking A-bomb survivors how they will respond to the current nuclear crisis and what they will say.