Fukushima and Hiroshima: Medical support for the radiation-exposed, Part 4 [1] 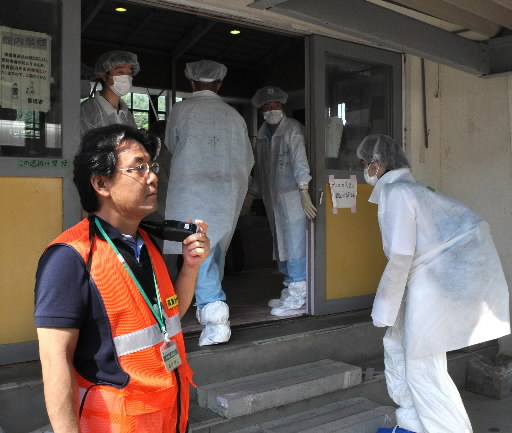 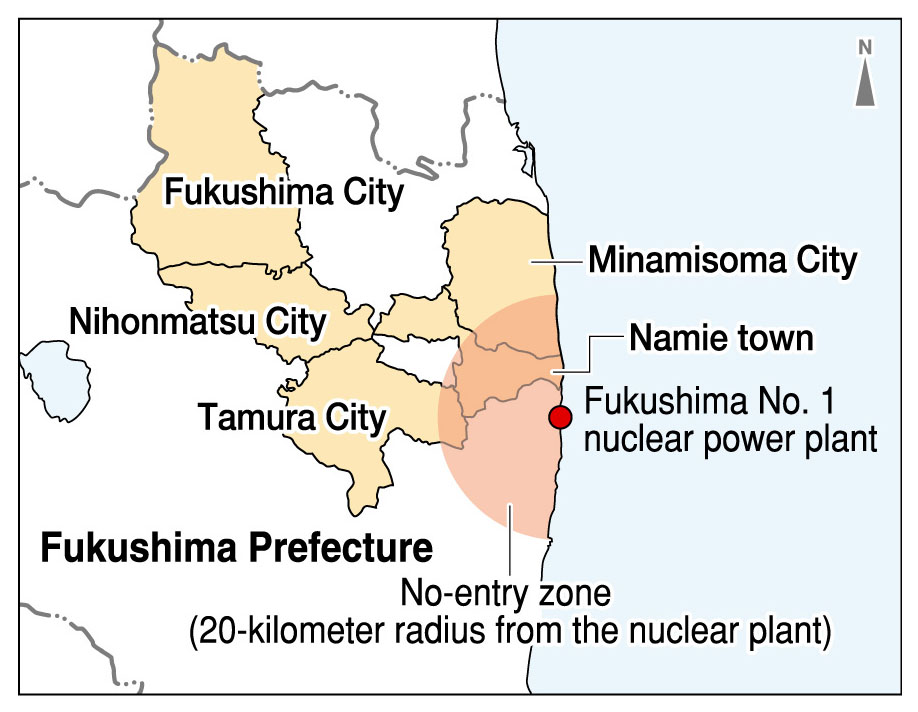 Article 1: Contributions from Hiroshima
by Yo Kono, Staff Writer

Over the past 66 years, the A-bombed city of Hiroshima has explored the connection between radiation and the human body through a long succession of efforts involving trial and error. In this series of articles, the Chugoku Shimbun eyes the affected area of Fukushima Prefecture and considers how Hiroshima should employ its unique perspective and accumulated expertise to provide support to the people living there.


Easing anxiety through on-site support
On July 17, in the city of Minamisoma in Fukushima Prefecture, local residents in protective gear entered a warehouse, one after the other. The warehouse serves as a checkpoint where the condition of the residents is inspected, including whether their bodies and belongings have contacted any radioactive materials. This procedure is conducted after residents have returned temporarily to their homes, located within a radius of 20 kilometers from the Fukushima No. 1 (Daiichi) nuclear power station, the area designated a “caution zone.”

Hidemitsu Takada, 59, looked pleased. “I feel relieved,” he said, “after being examined so closely.” Mr. Takada's house is in the town of Namie, which lies within the caution zone. A farmer, he returned home temporarily from Hiroshima, where he has relocated.

Doctors and radiological technicians from Hiroshima University play a significant role in the management and operation of this checkpoint. Since June, a medical team of generally four specialists have been engaged in work there each day, providing whole-body examinations from the top of the head to the soles of the shoes. Four and a half months have now passed since the nuclear crisis began, and these specialists are lending support to the desires of the local residents, who wish to check the conditions of their homes and remove needed items.


Departing the day after the earthquake
“Hiroshima University moved faster than any other institution,” said Koichi Tanigawa, 54, director of the Advanced Emergency and Critical Care Center at Hiroshima University Hospital. Dr. Tanigawa himself left for Fukushima Prefecture on March 12, the day after the Great Eastern Japan Earthquake struck, with the first group of medical experts trained to handle emergency radiation exposure. Since then, a total of 195 people in 33 groups have entered the affected area.

Dr. Tanigawa recalled that, in the aftermath of the nuclear accident, a number of people, with radioactive materials clinging to their clothes and other belongings, poured into evacuation centers in the city of Nihonmatsu in central Fukushima Prefecture. But water, which is vital for decontamination, and extra clothes were in short supply. Dr. Tanigawa assessed the situation and decided: “To protect the health of the evacuees, having an adequate supply of water and warmth from the cold are more important than decontamination.” He then prioritized the decontamination of those people who had been exposed to radiation of 400 becquerels per square centimeter or more. Pleased with his judgment in such conditions, Dr. Tanigawa said, “Because I was equipped with the knowledge of emergency medical care and medical care for those exposed to radiation, I was able to make a quick evaluation of the situation.”

In late March, Satoshi Tashiro, 49, a pediatrician at Hiroshima University’s Research Institute for Radiation and Medicine, examined about 1,000 children in such municipalities as Iitate and Kawamata in Fukushima Prefecture. Dr. Tashiro sought to detect the level of radiation that had accumulated in the children's thyroid glands. He found that the results of all the children examined were below the standard level of 0.2 microsieverts per hour. Dr. Tashiro's finding helped alleviate the anxiety parents were feeling about the effects of radiation on their children.

For seven days, starting in mid-March, experts from the Hiroshima International Council for Health Care of the Radiation-exposed (HICARE) helped check the levels of radiation exposure of some 1,400 evacuees.

In the wake of the nuclear accident, doctors and other specialists from the A-bombed city of Hiroshima are employing their accumulated expertise in order to ease the suffering in Fukushima Prefecture.


Unprecedented exposure to low-dose radiation
However, the know-how gained through providing medical care to A-bomb survivors in the past is not necessarily applicable in the case of Fukushima. This is because a decisive difference exists between the two. In the atomic bombing, the sufferers were exposed to a massive amount of radiation in a very short time, while in the case of the nuclear power plant accident, the sufferers are being exposed to a low dose of radiation over an extended period of time. According to Hiroshima University’s Research Institute for Radiation and Medicine, the difference in effects on the human body produced by these two different scenarios remains unclear.

Anxiety is now widespread in Fukushima Prefecture, as well as in the surrounding prefectures, over exposure to low-dose radiation, an unprecedented horror. Among A-bomb survivors, however, it has been confirmed that only those who were exposed to a radiation level of 100 millisieverts or more run an increased risk of developing cancer. What happens when people are continuously exposed to a low dose of radiation over a long period of time is uncertain.

A survey targeting the population of the entire prefecture, a total of 2.02 million people, will be undertaken in the near future to monitor the health of residents in the affected area.

Among the eight members of the planning committee for the survey, two are experts from Hiroshima. One of them, Kenji Kamiya, 60, director of Hiroshima University’s Research Institute for Radiation and Medicine, has been busy with such tasks as explaining radiation risks to local residents in his role as radiation health risk management adviser.

“Honestly speaking,” Dr. Kamiya said, “it's hard for us to eliminate the anxiety the people of Fukushima Prefecture are feeling by simply presenting the data we have at hand. But I believe they will feel reassured when the results of the health survey, among other information, are compiled.”