Fukushima and Hiroshima: Medical support for the radiation-exposed, Part 4 [2] 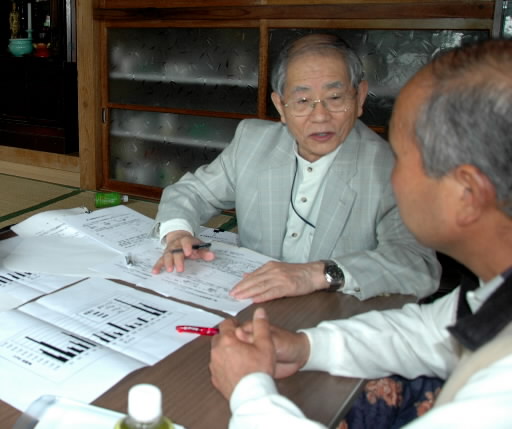 
Research undertaken to aid residents
The prefectural government of Fukushima will soon begin distributing questionnaires to all 2 million residents within its jurisdiction. The questionnaire includes 24-hour timelines covering the period of March 11 to 25, and residents will complete the questionnaire by indicating when they were indoors or outdoors. The objective of the survey is to estimate the level of each person's radiation exposure based on this record of their behavior following the accident at the Fukushima No. 1 (Daiichi) nuclear power plant. Respondents, however, will be forced to search their memories for actions taken as long as five months ago.


Visiting the affected area
Six weeks after the nuclear crisis erupted, one Hiroshima physician was moved to visit Fukushima Prefecture on his own impetus. Nanao Kamada, 74, professor emeritus at Hiroshima University, said, “As time passes, the residents' memories will fade and it will become more difficult to detect radioactive substances. I felt that evidence of the exposure should be recorded.”

Once radioactive materials are taken into the body by inhaling them or by ingesting radiation-contaminated food, they are gradually eliminated in the urine and feces. On May 5, he collected urine samples from 15 residents of the village of Iitate and the town of Kawamata, believing that analysis of this urine would provide evidence of internal exposure to radiation.

Dr. Kamada found cesium in all his samples, but only a minute amount. Even if this amount of cesium were to emit radiation for the next 50 years, the total dose of internal exposure would not exceed 0.1 millisieverts.

When the test results and explanations were given to the examinees on May 29, they were asked to provide information on their behavior. Based on this data, levels of external exposure were also estimated, with the highest at 13.5 millisieverts.

Dr. Kamada pointed out that the radiation dose derived from external exposure suggests that it would be better for the residents to evacuate. On the other hand, he has not come to a conclusion about their internal exposure. “This is a very difficult issue. In studies involving Hiroshima, internal exposure had been overlooked,” Dr. Kamada said, speaking critically of his own work as a medical doctor in Hiroshima.


Treat people with compassion
Dr. Kamada came to realize the effects of internal exposure in 2007 when he wrote a paper on a woman who had contracted three types of cancer.

She was exposed to the A-bomb shortly after giving birth at her home, four kilometers from the hypocenter, in Nishi Ward, Hiroshima. For the next two weeks she was exposed to residual radiation until finally taking refuge. Based on the rate of abnormal chromosomes found in her body, it was estimated that the total dose of her exposure was equivalent to that of being directly exposed to the bomb about 1.5 kilometers from the hypocenter. Dr. Kamada became strongly aware that the effects of internal exposure were too great to ignore.

The health monitoring survey by the prefectural government of Fukushima will be launched shortly. Some residents welcome the survey but it is also true that complaints have been voiced, saying that the survey is designed only to collect data and no explanation will be provided if medical attention is needed.

“You need to treat people with compassion when conducting a survey like this,” Dr. Kamada said. His survey involving A-bomb survivors continues to this day, and every year he sends New Year's cards to the participants. Each time they visit the hospital for a check-up, he takes a photo with them.

“It takes time for the effects of radiation to become apparent. Doctors should always have compassion for those living with this anxiety,” suggests the doctor who has played an important role in Hiroshima medicine for half a century.