Fukushima and Hiroshima: Medical support for the radiation-exposed, Part 4 [3] 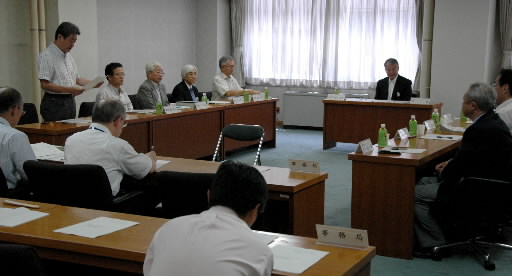 
Urgent need for examinations of ordinary residents
Examinations to measure internal exposure to radiation have been conducted, on a priority basis, for a total of 122 people living in the towns of Iitate, Namie, and Kawamata in Fukushima Prefecture, where high levels of radiation have been recorded. On July 24, at a meeting of the committee formed to study and monitor the health of residents in Fukushima Prefecture, held at the Fukushima Prefectural Government Office, an official from the National Institute of Radiological Sciences, located in the city of Chiba, reported that “The level of internal exposure of all examinees was less than one millisievert.”

The institute used whole-body counters to carry out the examinations. A whole-body counter is a device used to detect different types and amounts of radioactive material in the body that has been inhaled or ingested through food. In the wake of the accident at the Fukushima No. 1 (Daiichi) nuclear power plant, the prefectural government continues to receive inquiries daily, inquiring, “How can I undergo this exam?”

According to the prefecture, two whole-body counters are currently available in the prefecture. One examination takes about 20 minutes. However, it is logistically impossible for all the residents from areas designated as off-limits or hazardous, a total of about 200,000 people, to undergo the examination.

One whole-body counter is found at the Fukushima Medical School in the city of Fukushima, but the school has been using the device to provide examinations for the fire fighters and police officers engaged in operations in the vicinity of the nuclear plant. Yoshio Hosoi, a professor at Hiroshima University’s Research Institute for Radiation Biology and Medicine, points out, “Ordinary residents, too, are concerned primarily about internal exposure. It's vital to inform them of their own individual exposure to radiation.”


High expectations of Hiroshima's expertise
People who have moved away from the prefecture since the nuclear crisis began are also worried about their internal exposure to radiation. Sachiko Kanno, 38, relocated this month from Fukushima City to Aki Ward, Hiroshima, along with her three children. Although Ms. Kanno had no personal connections to Hiroshima, she chose to evacuate here because she holds high expectations of the expertise that the A-bombed city has accumulated over the years. But in mid-June, prior to her move to Hiroshima, she asked Hiroshima University Hospital to examine the members of her family using a whole-body counter and the hospital declined her request. Hiroshima University Hospital has the only whole-body counter in Hiroshima Prefecture.

Hiroshima University Hospital will soon conduct examinations to measure the internal exposure suffered by fire fighters and police officers who have been at work near the nuclear power plant. The hospital says that it hopes to also examine ordinary people in the future. But one doctor at the hospital voiced the view: “In order to ease the anxiety felt by the evacuees, examinations for internal exposure to radiation must be carried out among the general population as soon as possible.”

Ms. Kanno’s eldest son, 11, and second son, 10, eventually visited the city of Nagasaki and underwent the whole-body counter examination at Nagasaki University Hospital. The results of the test were a great relief. “I received a thorough explanation of the figures, and felt comforted by the information,” she said.


Explanation of results is required
With radioactive materials continuing to be released by the crippled plant, the anxiety of ordinary citizens toward their potential exposure to radiation has mounted. To ease these fears, examinations using whole-body counters can be of benefit. At the meeting of the committee charged with studying and monitoring the health of residents in Fukushima Prefecture, Dr. Kenji Kamiya, one of the eight committee members and the director of Hiroshima University’s Research Institute for Radiation Biology and Medicine, commented, “The people of Fukushima can be made to feel more secure by combining the urine examination and the examination with the whole-body counter.” Dr. Kamiya added, “As it's difficult for the examinees to understand the results of tests measuring internal exposure, it's essential to provide them with a detailed explanation of the data.”

Individuals are naturally eager to know their own level of exposure, as opposed to the exposure reading of someone else from their area. The A-bombed city of Hiroshima is now also faced with the question of whether it can meet the earnest needs of the ordinary residents of the affected area.