Fukushima and Hiroshima: Medical support for the radiation-exposed, Part 4 [4] 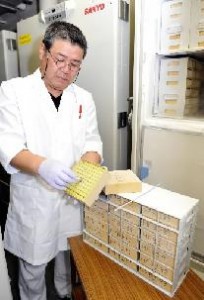 
Past experience guides advice on gaining trust
The Radiation Effects Research Foundation (RERF) is located on a hilltop in Minami Ward, Hiroshima. The foundation has long studied the causal correlation between radiation exposure and illness by monitoring a total of roughly 120,000 people, including about 94,000 A-bomb survivors.

At a meeting held on July 27, Toshiteru Okubo, 72, the chairman of RERF, announced an agreement between the organization and Fukushima Medical University in Fukushima City. “Working together, we will provide assistance to the people of Fukushima,” Dr. Okubo said. Fukushima Medical University is charged with preparing the health management survey that will target the entire population of Fukushima Prefecture in the wake of the disaster at the Fukushima No. 1 (Daiichi) nuclear power plant. In devising its survey, the institution will lean on the expertise accumulated by RERF over the years.


Department chief dispatched
Since May, Kotaro Ozasa, 55, the chief of the department of epidemiology, has been dispatched to Fukushima Prefecture as the need arises. Dr. Ozasa is continuing to provide advice to aid the survey planning. “We wouldn't be able to move forward with this survey without RERF's support,” said one person involved in the survey from Fukushima Medical University, expressing confidence in RERF. The medical university holds high expectations of RERF's considerable expertise in such areas as analyzing data and building cooperation with local medical organizations.

RERF was established in April 1975 when the new foundation succeeded the research studies conducted by the Atomic Bomb Casualty Commission (ABCC), a U.S. entity. RERF is administered by the governments of both Japan and the United States. The epidemiology study it maintains was first implemented by ABCC. Selecting the subjects for the study based on the national census of 1950, ABCC came to grasp the conditions of the people who were exposed to the atomic bomb through interviews and other means. Since that time, RERF has carried out follow-up surveys and come up with such findings as an increase in the incidence of cancer among A-bomb survivors, including leukemia.

Following the accident at the nuclear plant, the central government designated an annual limit of 20 millisieverts of radiation as the benchmark for issuing evacuation orders, among other directives, in the vicinity of the power station. This limit is based on a recommendation issued by the International Commission on Radiological Protection (ICRP). And this recommendation, in turn, is derived from the studies conducted by RERF involving A-bomb survivors.

At the same time, RERF has not yet been able to clarify the effects of exposure to a lower dose of radiation, 150 millisieverts or under, on the human body.

The survey in Fukushima Prefecture will be a study of unprecedented size, at home or abroad, as it will target as many as 2 million people. While the survey is drawing attention, local residents who have been at the mercy of the nuclear power plant are expressing chagrin over its intentions. Mari Kobayashi, 46, on the staff of an NPO in the village of Iitate, shared mixed feelings, saying, “I feel like the survey is being conducted to collect data for the next nuclear accident.”


Diligence is needed
RERF, too, has a history of inviting distrust among A-bomb survivors, who claim, “The organization examines us, but provides us with no medical treatment.” Saeko Fujiwara, 58, the chief of the department of clinical studies at RERF, said, “Carrying out surveys in a hasty manner can undermine trust.” Since 1958, about 20,000 of the 120,000 people in the RERF study have been subjects of the medical examinations. Currently, the examination rate of this group stands at a high 70 percent. This is partly due to the hardworking efforts of staff members charged with visiting the homes of A-bomb survivors, one by one, to overcome lingering distrust. These staff members have gained the survivors' confidence by diligently forming ties with them.

Akito Kono, 84, a resident of Higashi Ward, Hiroshima, has been taking part in the RERF survey since the 1970s. “I can completely understand the anxiety felt by the people of Fukushima,” he said. “I hope that the findings gained in the studies conducted in Hiroshima will be put to good use in Fukushima.”