Fukushima and Hiroshima: Medical support for the radiation-exposed, Part 4 [5] 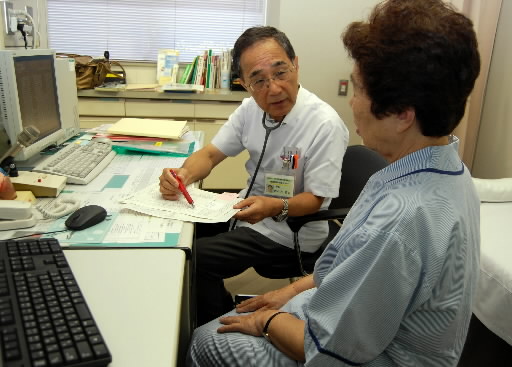 
System for sustaining health checkups crucial
In an examination room at the Health Management and Promotion Center at the Hiroshima Atomic Bomb Casualty Council, Dr. Hideo Sasaki, 63, spoke gently to Kazuko Kishioka, 76. After asking about her physical condition, Dr. Sasaki, director of this center located in downtown Hiroshima, reached out his hands and checked her thyroid gland with his fingers. “It feels slightly swollen,” he said.


Never misses a checkup
Ms. Kishioka was exposed to the flash of the atomic bomb at her home in Minami Ward, Hiroshima, about 1.5 kilometers from the hypocenter. She was 10 years old at the time. These free health checkups are held twice a year and Ms. Kishioka never misses them. “I'm always afraid of getting sick,” she said.

“People who were exposed to the A-bomb at a young age, when they were more vulnerable to radiation, are growing older now and becoming prone to cancer,” Dr. Sasaki said. “I'd like them to undergo these checkups as a way of supplementing the examinations given by their family doctors.” Stressing the significance of the checkups, he added, “I hope these regular checkups will be helpful in the early detection of diseases.”

A-bomb survivors living in the city of Hiroshima are entitled to receive two health checkups a year at 130 medical facilities, including the above-mentioned center where two-thirds of the examinees go. The checkups are free of charge.

The national health checkup system was established in 1957, when the the Atomic Bomb Medical Relief Law was enacted 12 years after the bombing. The Hiroshima Atomic Bomb Casualty Council was formed four years before the law was passed. The municipal government and the Hiroshima City Medical Association, among other organizations, cooperated in establishing the council to provide medical assistance to survivors, who had been virtually neglected.

In those days, regular health checkups and comprehensive medical examinations were not very common. The content of the checkup was then strengthened based on the opinions of the doctors who were involved in examining the survivors, physicians with ties to the council or the municipal government. In the face of unprecedented suffering caused by exposure to the atomic bomb, doctors and administrators have developed a compassionate system designed to support the health of the survivors.

On July 24, at a meeting of the committee charged with studying and monitoring the health of residents of Fukushima Prefecture, the chair of the committee, Shunichi Yamashita, 59, referred to the need for a system to conduct checkups for the public. Dr. Yamashita, who is also the vice president of Fukushima Medical University, had the Hiroshima council in mind when he mentioned that the systems established in Hiroshima and Nagasaki could serve as models for the prefecture's system.


Enormous number of examinees
But there are significant challenges. There are 68,886 A-bomb survivors in the city of Hiroshima and 219,410 nationwide. The population of Fukushima Prefecture is about two million, incomparably larger than the number of Hiroshima survivors. Masafumi Abe, 64, vice president of Fukushima Medical University, has called for an “all-Japan” system.

Important as it is to introduce a health management system for the residents, sustaining that system is also essential. Chikako Ito, 71, former director of the Health Management and Promotion Center at the council, said, “People will continue to come for checkups only when they trust the system.” Referring to the important psychological aspect of allaying the anxiety of examinees, Dr. Ito also suggested, “Diagnostic accuracy needs to be strengthened, and convenience for the examinees must be improved through various ways, including providing checkups at sites other than designated facilities.”

While the central government should take responsibility for the health of A-bomb survivors or those who have been exposed to radiation, the accumulated expertise acquired through medical examinations should be utilized in preventing other people from becoming victims, too. The nation now faces such challenges again in Fukushima.