Fukushima and Hiroshima: Medical support for the radiation-exposed, Part 4 [6] 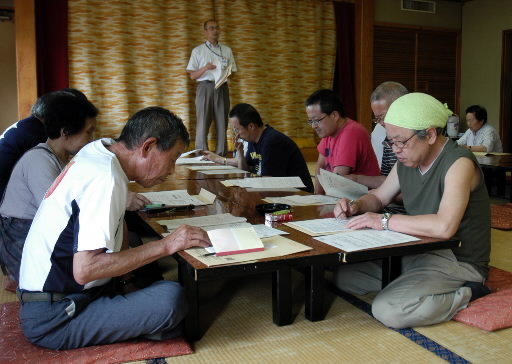 
Amid mounting health concerns, some victims considered ineligible
On the day of the Great Eastern Japan Earthquake, Chiaki Suzuki, 49, was at her parents’ home about nine kilometers from the Fukushima No. 1 (Daiichi) nuclear power plant. The flower-arrangement instructor, now a resident of Iwakuni, Yamaguchi Prefecture, spends her days worrying what the future will bring in this new city far from the disaster zone.

When the earthquake struck, Ms. Suzuki was cleaning up after a memorial service to mark the end of seven weeks of mourning following her father's death. Starting the next day and continuing for two weeks, she moved from one shelter to another around the prefecture.

In August, the prefectural government of Fukushima will conduct a health management survey for its entire population, roughly 2 million residents. But Ms. Suzuki is now living in Iwakuni and will not be included in the survey. For the future, too, she is unsure what sort of health management support she will be able to access. Like Ms. Suzuki, there are a significant number of people who were present in Fukushima when the nuclear accident unfolded, but are no longer residing there.


Evidence required to prove whereabouts
According to the prefecture’s health promotion department, people can be examined or take part in the survey, if they wish, but they must prove that they were present in Fukushima Prefecture at the time of the accident. Such evidence may include the testimony of others they were with or receipts from hotels at which they stayed. The intention is to draw a line in some fashion.

The same thing has long been a part of verifying the status of A-bomb survivors.

According to Hiroshima's Atomic Bomb Survivors Relief Department, in principle, a person must be able to provide the testimony of two or more witnesses in order to obtain the Atomic Bomb Survivor's Certificate. This certificate is needed to access relief measures for survivors, such as a medical allowance.

However, some survivors lost all family members and friends to the blast, and others were by themselves when they were present at areas near the hypocenter. In such cases, these people were forced to brave great difficulties in their efforts to obtain the certificate. In other cases, survivors intentionally refrained from applying for the certificate because they were afraid that their children might suffer discrimination as the children of A-bomb survivors. Now, when they seek the certificate at a later age, they are often unable to locate witnesses.

Katsuaki Aoki, 63, director of the medical examination center at Hiroshima Kyoritsu Hospital in Asaminami Ward, Hiroshima, stressed, “In regard to Fukushima, health services should be provided to all those who wish to receive them.” Dr. Aoki has been involved in the medical treatment of A-bomb survivors for many years and has seen considerable suffering as a result of the application rules.

Since 1972, the Japan A- and H-Bomb Sufferers Organizations have lent their support to those looking for witnesses. Each year they receive requests for assistance from around ten people, but only about half of these are able to obtain the certificate.


Lines drawn based on area
There are other difficult issues as well. Shortly after the bombing, black rain fell on Hiroshima. People who were present in the “heavy rain area,” as designated by the central government, are entitled to receive free health checkups, and can obtain the Atomic Bomb Survivor's Certificate if they have developed certain diseases, such as cancer. On the other hand, people who were in the “light rain area” cannot even access the free checkups.

The line between these two areas was determined by district. In other words, the residents living on one side of a river or road are provided services that differ greatly from what is available to their neighbors on the other side of that river or road. Thus, the demand that the central government expand the designated area continues to this day.

The fact that radiation is invisible stirs keen anxiety. “The unfortunate history of Hiroshima should not be repeated in this way,” Dr. Aoki said. He stressed, “Relief measures should be provided with the primary consideration of addressing the needs of the victims.”