Fukushima and Hiroshima: What must be done now, Part 5 [1] 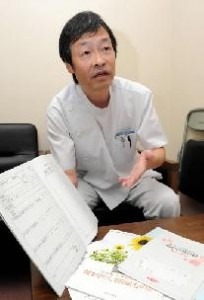 What should be done now to address the impact of radiation in the affected areas? What measures and forms of support are needed so that these areas can begin taking steps toward restoration? In this series, the Chugoku Shimbun interviews six experts to learn their recommendations. The following are excerpts from an interview by Kei Kinugawa, staff writer, with Hidefumi Fujiwara, vice president of the Hiroshima Chuo Hoken Cooperative Society.

No one knows what effects will be produced in the future by the radiation contaminating the affected areas. Therefore, recording the behavior of residents in the aftermath of the accident at the Fukushima No. 1 (Daiichi) nuclear power plant will create valuable data. For example, right after the accident, when were they outside? What sources of water did they consume? It's vital that medical institutions record such data about the sufferers.


Commonality with those who entered the hypocenter area after the A-bombing
In April, the Emergency Radiation Exposure Accident Countermeasure Headquarters Conference, established by the Japan Federation of the Democratic Medical Institutions (MIN-IREN), created a notebook in which residents themselves make entries about their behavior as well as a medical questionnaire for medical institutions to record what people say in interviews. I call on all medical institutions in Japan to create this kind of questionnaire, regardless of the style.

When we created our questionnaire, we referred to the application form used in the lawsuits involving A-bomb disease certification. On these forms the applicants made entries on their behavior and their symptoms in the wake of the atomic bombing. One of the focal points of the lawsuits concerned the effects from residual radiation. Some commonality exists between those who entered the vicinity of the hypocenter in the aftermath of the atomic bombing and the residents of the areas affected by the accident at the nuclear plant, who have been exposed to low levels of radiation over a continuous period of time.

Although some experts make the claim that a level of radiation exposure of 100 millisieverts or less over a person's lifetime is a safe threshold, that has not been proven. Similar to the fact that some people are more susceptible to suffering fractures than others, susceptibility to the effects of radiation naturally varies among individuals. We must recognize the risk that radiation poses as we address the problem.

On the front of our questionnaire, we ask about any changes in their health, their level of stress, and the things that have caused them anxiety since the accident occurred, in addition to ailments for which they are already receiving treatment and the medication they take. On the back, the patients themselves write about their behavior on the days following the accident on March 11. When medical personnel interview such people and record their behavior, it might be helpful to show them maps or a list of incidents involving the accident to enable them to recall what they were doing at the time.

It's easier, too, to recall such memories when people talk together in small groups. For instance, memories can be jogged when someone says “It snowed that day” or “I was harvesting radishes in the cold.” Whether or not they were exposed to rain is also a vital factor, as the “black rain” was recognized to be crucial in the lawsuits involving A-bomb disease certification.


Taking the position of providing compensation
Of course, it will be for the best if the medical questionnaire and the effort at recording behavior turns out to be an unnecessary precaution and the documents are ultimately not needed. But, in terms of the health effects wrought by the atomic bombings of Hiroshima and Nagasaki, many aspects of the problem only came to light a number of years after the bombings occurred. Back then, there was a sense of malaise, a symptom of the A-bomb's impact, that was not properly treated by the medical establishment.

Our stance with regard to the A-bomb survivors of Hiroshima and Nagasaki has been firm: unless their illnesses are proven to be unconnected to the atomic bombings, we believe that the bombings have influenced these effects. If certain symptoms become apparent among the people who were living near the crippled nuclear plant, it will be necessary to recognize such symptoms as related to their radiation exposure and take the position of providing compensation to these sufferers of the accident.

Hidefumi Fujiwara
Dr. Fujiwara was born in Hiroshima in 1956. He is a graduate of the Faculty of Medicine at Tottori University. He assumed the title of vice president of the Hiroshima Chuo Hoken Cooperative Society in 2008, after serving as an internist at Fukushima Seikyo Hospital, a hospital in Hiroshima launched by this organization. Dr. Fujiwara also serves as deputy chief of the Emergency Radiation Exposure Accident Countermeasure Headquarters Conference established by the Japan Federation of the Democratic Medical Institutions (MIN-IREN). He is a resident of Nishi Ward, Hiroshima.