Fukushima and Hiroshima: What must be done now, Part 5 [2] 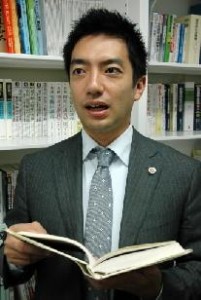 The following are excerpts from an interview by Seiji Shitakubo, staff writer, with Kentaro Imada, an attorney and vice chairman of the Japan Federation of Bar Associations’ Disaster Recovery Support Committee.

On September 1 victims of the accident at the Fukushima No. 1 (Daiichi) nuclear power plant and representatives of the Tokyo Electric Power Company will begin negotiations on compensation for damages using a process referred to as “alternative dispute resolution.” But the government will set up only two ADR centers to deal with the harm resulting from the nuclear power plant accident: one in the city of Koriyama in Fukushima Prefecture and one in Tokyo. It’s ridiculous.


Only two centers
About 50,000 people from Fukushima Prefecture have relocated throughout the country, including about 820 living in the Chugoku Region. Two ADR centers in eastern Japan are not enough to handle all of them. Some people may give up on seeking compensation for damages because the transportation costs will be burdensome or it will be too much trouble for them to travel a long distance.

In early August the Dispute Reconciliation Committee for Nuclear Damage Compensation of the Ministry of Education, Culture, Sports, Science and Technology issued interim guidelines regarding what will be covered by the compensation as well as basic amounts. When negotiations on compensation go smoothly, it’s no problem, but when disputes arise lawsuits are filed. Lawsuits not only take time and money, they also place a mental burden on the victims.

For that reason, the ministry’s Dispute Reconciliation Committee decided to use ADR. Under that system, attorneys and other experts who hold neutral positions arbitrate a settlement. In the case of medical care-related ADR, the fee for the mediation of discussions over several days is about 10,000. In recent years this has become increasingly popular as a method for settling civil disputes, but in order to use this system, people often have to travel long distances, so it’s totally absurd in this case.


Hard lessons of the atomic bombing
I’ve been vice chairman of the Japan Federation of Bar Associations’ Disaster Recovery Support Committee for four years. Since the accident at the nuclear power plant, I have become strongly aware of being a lawyer from Hiroshima. We must ensure that all of the victims of the nuclear power plant accident have an equal opportunity for judicial remedies. The atomic bomb survivors living overseas went through the same sort of hardships. After experiencing an atomic bombing in Hiroshima or Nagasaki, they returned to their home countries or emigrated. As a result, for many years no aid from the Japanese government reached them.

Take, for example, the procedures to apply for an Atomic Bomb Survivor's Certificate. At first, applicants were obligated to come to Japan. The government did not permit people to apply at diplomatic or consular offices in foreign countries until 2008, more than 60 years after the atomic bombings. The government must provide aid to the victims of the nuclear power plant disaster in the same manner regardless of where they are living.

The Hiroshima Bar Association is currently offering its own mental health care services to the disaster victims. Like the victims of the atomic bombings, some are experiencing prejudice because they were exposed to radiation or are being subjected to insensitive comments. For this reason, in cooperation with social workers the bar association created a system under which victims can get counseling.

I have become keenly aware that in order to stand by Fukushima, Hiroshima must put its experience and accumulated knowledge to use in the judicial realm as well as in other areas.

Kentaro Imada
Born in Higashi Hiroshima in 1976. Graduate of Hitotsubashi University. Passed the bar examination in 2001 after quitting his job at a major construction company, where he had worked for two years. Affiliated with Asuka, a local law firm with offices in Hiroshima and Higashi Hiroshima. Resident of Hiroshima.