Fukushima and Hiroshima: What must be done now, Part 5 [5] 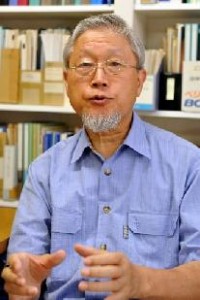 The following are excerpts from an interview by Yoko Yamamoto, staff writer, with Hiromichi Umebayashi, special adviser to the non-profit organization Peace Depot.

Ever since the accident at the Fukushima No. 1 (Daiichi) nuclear power plant occurred there has been ongoing confusion, and there’s no telling what’s going to happen with this crisis. Bringing it to a close is a matter of great urgency. Meanwhile, we need to send professional historians who are trained to gather information to the disaster area so that we can tell people overseas and future generations exactly what happened. They should be provided with proper protective gear and sent into the nuclear plant and into the “caution zone” to make a record of what has happened. Several people would be needed for this task.


Materials and accounts important
In this case “historians” refers to a group of professionals who would gather materials and the accounts of individuals and prepare a record from an objective perspective. They don’t necessarily need to be experts in nuclear energy. In the case of the accident in Fukushima, the withholding of information by the central government and the Tokyo Electric Power Company led to greater confusion and resulted in a loss of international credibility. The government and some other agencies should create a team of historians and give them broad investigative authority.

Presumably, exhaustive studies of the nation’s overall nuclear energy policy will be conducted, including the causes of the accident, the initial response and the proper method of disclosing information. All sorts of materials and accounts will be necessary for this purpose including data from recorders inside the nuclear power plant as well as handwritten memos and the minutes of meetings. These must not be allowed to be scattered and lost. Debate based on biased materials will lack objectivity and be liable to political influence. It’s dangerous.

I first clearly realized the value of historians while conducting surveys and research into nuclear arms reduction when I examined records of previous wars. In Europe, for many years, aside from publicists to boost fighting spirit, historians who had trained with the troops were sent along with them because the Europeans recognized the importance of recording and preserving the facts. If a lot of materials and documents are preserved, the people of future generations can examine them from various angles.

In the case of Hiroshima as well, if there had been knowledgeable, highly aware historians on the scene, they could have gathered the accounts of survivors, data on the weather just after the bombing and other information. Records like that might have had important implications in areas such as clarifying the details regarding the black rain, whose examination is still ongoing.


Unfettered access to information
Sending historians to Fukushima would be useful not only for the examination of the accident and its impact. From now on every citizen will have to consider the effects of radiation and the issue of nuclear energy and then take action. In order to do this, an environment in which people have unfettered access to extensive, objective information is essential. Japan’s stance on democracy is also being called into question.

Hiromichi Umebayashi
Born in Hyogo Prefecture in 1937. Earned a Ph.D. in applied physics from the University of Tokyo Graduate School. Served in various posts including assistant professor at Tokyo Metropolitan College of Industry. Founded Peace Depot in 1997. Served as its president from 2000-2008. Resident of Yokohama.