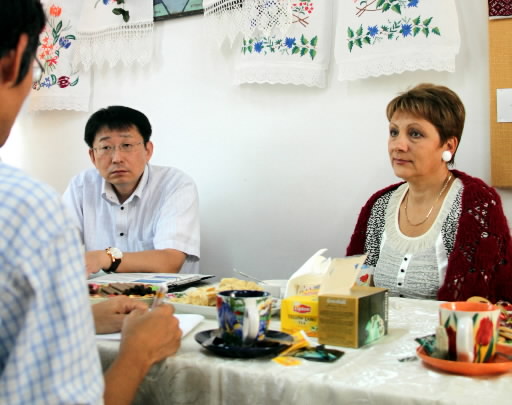 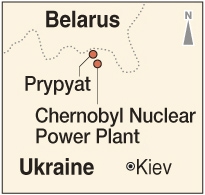 
Victims angered by reduction in compensation
A mutual aid organization called Zemlyaki, whose members evacuated from the town of Pripyat following the disaster at the nuclear power plant in the neighboring town of Chernobyl, maintains an office in Kiev, the capital of Ukraine.


Ongoing interviews
Noriyuki Kawano, an associate professor at Hiroshima University’s Institute for Peace Science, conducts research into the atomic bombing and exposure to radiation. In September he visited Zemlyaki’s office. Since 2009 he has been interviewing former residents of Pripyat about their experiences. Over the course of four surveys, interviews have been conducted with four men and eight women ranging in age from 33 to 73.

Prof. Kawano said that twenty-five years after the Chernobyl disaster shook the world “memories are fading and the public is less and less concerned.” This can be seen in various ways including the reduced compensation now offered to victims.

Over the last few years the government of Ukraine has cut the budget for compensation, citing fiscal woes. The provision of medicine at no cost was abolished, and discontinuation of the exemptions for one half of water and other utility fees and rent is being discussed.

According to a 33-year-old woman who was interviewed, these days payment of her small food allowance is often delayed. When the government announces its budget, the victims hold demonstrations against reductions in their compensation. “But the issue is never taken up in the parliament,” said a 68-year-old man.

Like residents in the vicinity of the Fukushima No. 1 (Daiichi) nuclear power plant, the 50,000 residents of Pripyat fled with just the shirts on their backs. The government of the Soviet Union decided to offer the victims priority on moving into apartment housing, which aroused the jealousy of those who had already made arrangements to move into that housing. Children were bullied, and some people were slandered.

Their feelings of homesickness are still growing. A 65-year-old woman said angrily, “My life was completely changed by the accident.” At the same time she said that she hopes to return home if possible.

But the deserted town of Pripyat has fallen into ruin and is littered with trash left behind by those who sometimes go to take a look at the town. “It is painful to see that,” said one 35-year-old man ruefully.


Lessons can be learned
“Fukushima can certainly learn from the stories of the residents of Chernobyl,” said Prof. Kawano. The nuclear power plant disaster in Fukushima has yet to be brought to a conclusion, and instances of residents’ internal exposure to radiation are repeatedly being discovered. He believes the interviews are important to ensure that 25 years from now Fukushima residents do not feel the same anxiety the Ukrainians feel now.

A 48-year-old man with a thyroid disorder who was interviewed said he also suffers from high blood pressure and diabetes and his wife had surgery for thyroid cancer. It is unclear whether or not this was the result of exposure to radiation, but her husband believes that all of their health problems are the effects of the disaster.