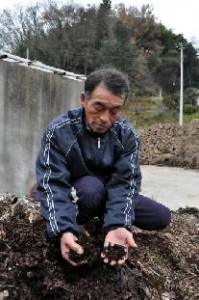 Article 1: Decontamination of mountain forests
by Yoko Yamamoto and Yo Kono, Staff Writers

Year’s end has come to Fukushima Prefecture, though a clear path to the area’s reconstruction is still wanting. Anxiety and frustration have taken their toll on local residents as a result of the grim effects of widespread radioactive contamination. The Chugoku Shimbun will explore the reality of the reconstruction effort and the challenges which lie ahead.


Government places priority on residential areas for decontamination
Radioactive materials which exceed the central government’s provisional safety limit of 500 becquerels per kilogram continue to be detected in some of the rice harvested in Fukushima Prefecture. In mid-November, the government ordered a series of suspensions involving the shipment of rice from areas within the cities of Fukushima and Date. This despite the fact that the land had been determined safe for cultivation in soil inspections conducted before the rice was planted.


Level of radiation equivalent to forced relocations after Chernobyl
“It seems likely that fact can be partly attributed to water flowing in from the mountains that was contaminated with radioactive elements,” said Masanori Nonaka, a professor in the faculty of agriculture at Niigata University and an expert in soil environment studies. His assertion is based on research he carried out in September in the city of Nihonmatsu.

Mr. Nonaka inspected some 1,000 square meters of land used as rice paddies in the Towa district of Nihonmatsu. This land is located about 45 kilometers to the northwest of the Fukushima No. 1 (Daiichi) nuclear power plant. In the soil lying near where the water enters from the mountains, he detected radioactive materials measuring 4,500 becquerels per kilogram of soil. This figure was close to the safety limit of 5,000 becquerels for cultivating rice. But the radioactive materials found at the edge of the paddy fields, away from the water intake, was as low as about 1,000 becquerels. “Radioactive materials have accumulated near the intake,” Mr. Nonaka explained. “It’s natural to think that the water from the mountains produced this contamination.”

With regard to the radioactive contamination of mountain forests, the central government and other bodies have collected some research data. In the town of Kawamata, next to Nihonmatasu, a high level of radiation, equivalent to the level involving forced relocations in the wake of the accident at the Chernobyl nuclear power plant in 1986, was detected on fallen leaves and surface soil in the mountains.

Currently, decontamination work to reduce the amount of radioactive materials in the affected areas has centered on the so-called “hot spots,” where levels of radiation were particularly high compared to adjacent areas. The goal of the work is to restore the lives of ordinary citizens. The reality, therefore, is that the primary target for decontamination efforts involves residential areas, and mountain forests are being given little attention.

The forests of Fukushima Prefecture cover about 970,000 hectares, amounting to roughly 70 percent of the prefecture’s total land area. In line with the policy announced by the central government in August with respect to decontamination work, only those forests situated close to residential districts will be targeted for decontamination efforts. But the policy stipulates only that “removing fallen leaves within an area of 20 meters from the edge of a forest is a sufficient measure.”


Considering the construction of simple dams
Mr. Nonaka sees this policy as merely a “stopgap measure,” commenting, “The government is only putting off the real problems and continuing to avoid essential discussions.”

Water, which gives life to agricultural land, flows in from the mountains. With the onset of winter, when the land becomes blanketed with deep snow, it will be virtually impossible to conduct any decontamination work there. When spring arrives, the water from the melted snow, which will contain radioactive materials, will flow again.

“I can’t just sit here and do nothing,” said Saichi Sato, 59, a farmer in the Towa district of Nihonmatsu. Mr. Sato heads up about 260 households who are engaged in organic farming in the district. He sought guidance from Mr. Nonaka.

One suggestion from Mr. Nonaka is the idea of constructing simple dams, which can block the contaminated water running down from the mountains. Old ponds could be used for this purpose. Filters to eliminate the radioactive particles could also be installed in agricultural flumes.

Mr. Sato is having difficulty selling the vegetables he grows due to the negative image people now hold of products from the affected areas. Still, looking up at the Abukuma Mountains, Mr. Sato vowed, “I’ll never stop farming.”