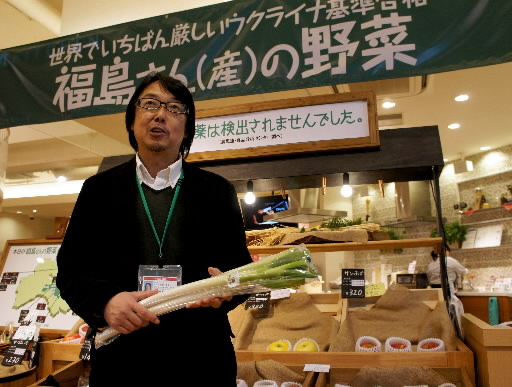 
Conveying information openly to make informed decisions
The idea of “risk communication” is drawing attention. Hidemi Suzuki, one of the proponents of the idea, offered further explanation: “Politicians and bureaucrats first disclose the information that is available to them without withholding such information due to concerns over creating turmoil in an emergency. Based on the information they have shared, experts in appropriate fields and citizens can then discuss the matter. Through this process, citizens themselves will be able to render their own judgment.”

Dr. Suzuki is a professor at Osaka University and an expert on the Constitution and information law. He once worked at Hiroshima University for about four and a half years. Professor Suzuki said, “In the immediate aftermath of the atomic bombing, the United States intentionally hid the horror of radiation. We must not repeat the same situation, 66 years after the bombing.”


Level of radiation is included on price tags
At a grocery store operated by a leading mail-order company in Minato Ward, Tokyo, perishable food items are sold at the shop to generate support for the areas affected by the accident at the Fukushima No. 1 (Daiichi) nuclear power plant. The price tags on the items, including green onions, apples, and potatoes, all contain information concerning radiation levels, such as “Measurement result: Cesium 137, 10 becquerels or less.” The store purchases these food products directly from its contracted farmers in Fukushima Prefecture. The staff of the shop measures the level of radiation each morning.

“I believe what we need to do now is disclose this information thoroughly,” said Okura Saito, head of the grocery store. The provisional safety limit set for agricultural products by the central government is 500 becquerels per kilogram. But is this truly an appropriate level for a safety standard? No one is able to guarantee the answer.

The limits set by the store, per kilogram, are 40 becquerels for vegetables and 70 becquerels for fruit. Such limits are markedly lower than the one set by the government. The store said that it has based its safety standards on levels set in Ukraine, a nation affected by the accident at the Chernobyl nuclear power plant in 1986.

Belatedly, the central government has begun to review its policy of “risk communication.” On December 1, the Cabinet Office held a working group for risk management on low dose radiation in Minato Ward, Tokyo. At this meeting, the handling of “risk communication” was one issue discussed by the participants. Goshi Hosono, the state minister charged with the government’s response to the nuclear accident, took part in the working group as the point man on this issue.

Charging that the government has been concealing information, the people of Fukushima Prefecture are furious over one fact, in particular: the results of the SPEEDI system (“System for Prediction of Environmental Emergency Dose Information”), which collects radiation data, was revealed to the public as late as one and a half months after the accident. Mr. Hosono, then special adviser to the prime minister, acknowledged at the press conference after the SPEEDI results were announced: “We wanted to avoid causing a panic.”


Proposal to establish a center that can respond to questions
Kenji Kamiya, one of the members of the working group and the director of Hiroshima University’s Research Institute for Radiation Biology and Medicine, proposed that “a center be established which can respond to any kind of radiation-related question from the public, including concerns involving the safety of a certain level of radiation exposure on human health or the level of radiation in particular foods.” To this proposal, Mr. Hosono responded positively, saying, “That’s a useful idea. The government will put its full support behind it.”

Nearly nine months have passed since the accident at the nuclear plant. Even now, however, the plant is continuing to leak radioactive materials into the environment. The decontamination work and the health management survey, two major tasks in the reconstruction efforts taking place in Fukushima Prefecture, have just begun. It will be a long, long time before a state of “zero risk” can be announced.