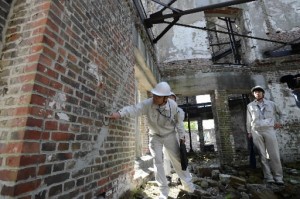 The City of Hiroshima is planning to carry out seismic retrofitting on the A-bomb Dome, a World Heritage site in Naka Ward, but is finding it difficult to determine an appropriate method. Some propose making it a seismically isolated structure, while others propose strengthening the walls. There is no precedent for conducting seismic retrofitting on a cultural property which consists of a seriously damaged building. The city government cannot easily find a solution that will adequately strengthen the building to withstand a strong earthquake while, at the same time, maintain its authenticity. Pressure is mounting for a decision so that concrete plans can begin to be made this fall.

The A-bomb Dome is a three-story brick building, completed in 1915 as the Hiroshima Prefectural Commercial Exhibition Hall. The City of Hiroshima collected cylindrical samples from the walls in fiscal 2013 and analyzed the building’s ability to withstand earthquakes. It was discovered that some portions of the walls could potentially collapse. In January of this year, the city announced a plan to perform seismic retrofitting on the building for the first time so that it can bear an earthquake measuring a lower 6 on the Japanese 7-point seismic scale.

The city has asked the seismic countermeasures subcommittee of the Advisory Committee on Preservation Techniques for the Historical Site of the A-bomb Dome to identify the most feasible method. Some members of the subcommittee have proposed the idea of digging up the ground and fitting a seismic-isolating device under the structure, which is deemed effective. Others, however, say that it would be quite difficult to dig a large hole beneath the A-bomb Dome, which is a historic site designated by the national government. Another idea is to strengthen the walls by wrapping them with carbon fibers, but this would spoil the appearance of the dome and compromise its authenticity. Applying the carbon fibers only in certain areas wouldn’t be as effective.

The most feasible idea involves reinforcing the structure by applying steel supports from inside. The shortcoming of this method, however, is that, because the strength of the structure is not even, it isn’t known how much reinforcement is actually needed. Teruo Kamada, a professor emeritus at Fukuyama University and an expert in seismic engineering, said, “The condition of the building is poor because of the atomic bombing, in addition to its deterioration from aging. It’s very difficult to carry out seismic retrofitting because we’re unable to apply commonly-used methods.”

Masayuki Miura, a professor at Hiroshima University and chairman of the Advisory Committee’s subcommittee on records and research involving the preservation of the A-bomb Dome, stresses the importance of maintaining its dignity. “Inside the A-bomb Dome are people’s remains, still buried among the rubble,” he said. “It’s like a grave for A-bomb victims. Maintaining the building as it is should suffice. If further reinforcement is needed, we must keep the work to a minimum.”

The City of Hiroshima intends to start drawing up concrete plans for the reinforcement work when it pursues a soundness survey of the building in September, the first such check in three years. If possible, it hopes to begin the effort of seismic retrofitting the building after August 6, 2015. This will be discussed with the Agency for Cultural Affairs before the method is finalized. The Monuments and Sites Division of the Agency said, “This will be a rare case for the world. What’s important is finding the right balance when it comes to preserving it as a historic site, maintaining its appearance, and applying reversible methods, using removable devices. The city’s Park Development Division commented, “We would like to reinforce mainly the fragile parts of the building and maintain the value of the A-bomb Dome as a cultural asset.”