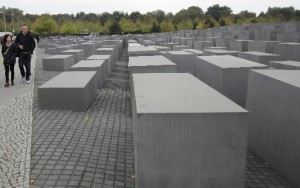 During a trip to Berlin in early fall I suddenly came upon a gray monument in the heart of the city, about 200 meters from the Brandenburg Gate. It was the Memorial to the Murdered Jews of Europe.

Covering an area of 19,000 square meters, the memorial consists of 2,711 blank concrete slabs resembling giant grave markers. As I walked the narrow paths between the slabs I felt as if I were in a maze. The memorial is intended to make people think about the 6 million Jews killed in the Holocaust amid silence.

Built in 2005, the memorial is relatively new. Its location in Berlin is akin to Ginza in Tokyo. I got a strong sense of Germany’s determination never to forget its history of victimization.

Next year will mark the 70th anniversary of the end of World War Ⅱ. But Japan’s perception of history continues to be called into question by its Asian neighbors, and there is no sign of a path to reconciliation.

Meanwhile Germany has mended fences with the neighbors it once invaded. Why is there such a difference in the ways Germany and Japan have addressed their wartime behavior? I considered this question while visiting Germany and Poland this month as a member of a group of editorial writers from Kyodo News member newspapers.

After the war Germany was divided into East Germany and West Germany and could not sign a peace treaty with the Allies. For this reason, for many years West Germany’s top priority was diplomatic relations with its neighbors, who were wary of it. Political leaders took action, and in 1970 Chancellor Willy Brandt knelt before the Warsaw Ghetto Memorial in a gesture of penance. But even after reunification in 1990, the compensation issue was neglected, and Germany was criticized by some for evading its legal responsibility.

A clear change took place in 2000 when the German Forced Labor Compensation Program was established to pay reparations to victims around the world who had been forced laborers during the Nazi era. Behind this move were class-action lawsuits brought in the United States against auto manufacturers, electronics companies and other German businesses that had used forced labor. There was also a widespread boycott of their products. Realizing that if these lawsuits continued it would do serious harm to Germany’s image as a trading nation, the government and the business community contributed 10 billion marks (about 540 billion yen) to the fund, which was paid out to victims. The victims in turn agreed to file no further lawsuits.

Leaders of the compensation fund on both the German and Polish sides told me that strong pressure from the U.S. was a factor in Germany’s ability to overcome its past.

Did Germany initiate the payment of compensation out of a desire to atone? Instead I got the feeling that a strategy of seeking international trust and enhancing its global standing by addressing issues related to history to benefit Germany in the future played a strong part.

What about Japan? Japan dealt with war-related issues primarily with reparations by the state through the Peace Treaty of San Francisco and bilateral accords. Japan has also supported the building of infrastructure in the countries it invaded through yen loans. The government’s stance is that postwar compensation has been resolved legally.

But state reparations were not paid directly to victims, and most of the compensation essentially ended up as economic aid to the countries to which it was paid. The facts regarding Japan’s economic assistance are not well known among the citizens of those countries.

In the past the Asian Women’s Fund paid compensation to former so-called “comfort women,” but many of them refused to accept the money because they felt there was no clear expression of responsibility on the part of the Japanese government. As a result, there is a strongly held belief in China and South Korea that Japan’s postwar compensation has been inadequate.

Of course, the situations of Japan and Germany differ greatly. The Nazis committed an atrocious crime against humanity by rounding up innocent Jews and exterminating them. Setting up the German system of postwar compensation as the ideal and attempting to use it as a model for Japan is not feasible.

But Japan must learn from Germany’s approach whereby, as a leader of Europe, it regarded reconciliation with its neighbors as essential and moved forward with a political resolution.

The key was its determination to prevent a repetition of the same mistakes. In Germany, history education for young people is comprehensive. Various events are held throughout the year, including a program under which victims of forced labor visit German junior and senior high schools and talk about their experiences.

Since 2006 schools in Germany and France have used the same history textbooks. Young people, who will lead the next generation, learn about what led up to the war from a broad perspective. Behavior lauding the Nazi era is strictly prohibited by law. The fact that today there is almost no criticism of Germany in Europe citing its Nazi past suggests that these efforts have been successful.

In Japan debate on the comfort women and other issues related to the perception of history has reignited. Many people are asking how long Japan will have to go on apologizing. But nothing will be learned from history by merely referring to telling the next generation about the crimes perpetrated by Japan during the war as a “masochistic view of history.”

The generation that experienced the war first-hand will be gone before long. It is important for Japan to strive to build trust among its neighbors while etching its negative past into its memory.