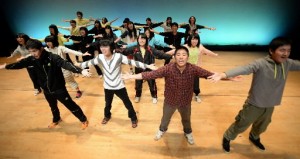 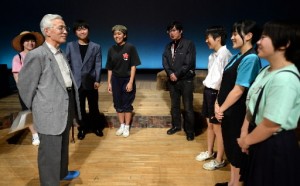 Pressure and a sense of mission: Carrying on A-bombing drama tradition

The atomic bombing is an important theme for high school drama clubs in Hiroshima. Nearly every year the students spend intense periods of time confronting the A-bombing. I visited rehearsals of the drama clubs of two of these schools, Numata High School in Asa Minami Ward and Funairi High School in Naka Ward, which have engaged in a friendly rivalry in competitions over the years.

The voice of Takashi Kurose, 50, adviser to the drama club at Numata High School, resounded through the school auditorium one day in mid-October. “Expression and the voice work together. Impress your audience with good expression,” he said. Pressure was mounting on the club members as they prepared for the upcoming regional drama competition, the stepping stone to the national competition.

The play was an original work by Mr. Kurose about a basketball player at a high school in Tokyo who is bothered by teasing for being the granddaughter of an A-bomb survivor. The grandmother, who experienced the atomic bombing of Hiroshima, has always felt guilty for surviving while classmates at her girls’ school perished. Hearing her grandmother’s experiences, the girl takes another look at herself.

Last year the school’s club advanced to the national championship for the first time in 18 years. The club, which had 11 members the year prior to its appearance in the nationals, now numbers 39. This time they plan to put on a play that features group movement without the use of fancy sets. “Let’s try to put on a play that only you can do,” Mr. Kurose told the club members.

Most of the members have had peace education in Hiroshima but the A-bombing can’t be portrayed with knowledge alone. The students must try to understand the feelings of A-bomb survivors and their family members and then consider how to convey those feelings on the stage.

Sana Yamashita, 16, a second-year student, will play the role of the grandmother in her student days. In one scene she speaks in a roundabout way about having survived the atomic bombing while talking with the mother of a classmate who was killed and is scolded for doing so. Ms. Yamashita said she asked to play that part in order to convey the misery of the A-bombing – the feelings of guilt over having survived and the ambivalence those feelings continue to cause. Ms. Yamashita got advice from Mr. Kurose and looked at photos of schoolgirls from that era in an effort to better imagine their situation. Nevertheless after rehearsals she sometimes sheds tears from the pressure.

“Survivors of the Tohoku disaster and the landslides in Hiroshima have these same feelings of guilt,” Mr. Kurose said. “I want the students, who are living in the present, to try to relate to these feelings and convey them in their performances.” With plays about the A-bombing there is no “finish line.” Mr. Kurose and the students continue to explore ways to present their message.

The drama club at Funairi High School is famous throughout Japan for its plays related to the atomic bombing. This year marked the 60th national championship. Funairi has appeared in the nationals 11 times, more than any other school in Japan, and has taken first place.

Funairi High School was once the Hiroshima First Municipal Girls’ School. A total of 676 of the school’s students and teachers were killed in the atomic bombing. “The school had more victims than any other school in the city,” said Yukihiro Suzaki, 58, the club’s adviser. “Amid concern that the A-bombing is being forgotten, we take pride in having built a tradition of presenting plays on the atomic bombing.”

“When I first joined the club, I thought plays about the A-bombing were uninteresting,” said June Tanaka, 17, a second-year student and native of Osaka. But after performing in the plays, her attitude changed. “I came to feel we had a responsibility to tell the story of the A-bombing,” she said.

In the regional competition eight club members will perform an original play that portrays the way of life of A-bomb orphans. Mr. Suzaki wrote the script based on a children’s book and picture-card story by Naoshiro Yoshimoto. Minori Kikuta, 16, a second-year student who will direct the play, said, “I’d like to portray the positive attitudes of A-bomb orphans and the energy they put into the rebuilding of the city.”

As the students rehearsed in the school auditorium, Takahiro Ito, 76, former adviser to the club, looked on with keen interest. In 1969 Mr. Ito wrote a play on the atomic bombing, the first original play to be performed by the school’s drama club, in an effort to put on a production that would highlight the school’s history. That was the start of the school’s A-bombing-related plays, a tradition that has continued.

“To the students the A-bombing may seem like ancient history,” Mr. Ito said. “The problem is how to enable them to understand the A-bombing and relate to it. I’m well aware that it’s difficult. But if Funairi doesn’t tell the story, who will?” The club members’ faces took on determined expressions.