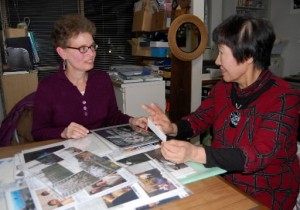 Olivia Fermi, 57, the granddaughter of Enrico Fermi (1901-54), a scientist involved in the Manhattan Project which developed the atomic bombs, has paid her first visits to the cities of Hiroshima and Nagasaki. The purpose of her trip was to view her grandfather’s “achievements” from a different perspective. In Hiroshima, she was invited to the home of Toshiko Tanaka. Ms. Tanaka, 76, is a resident of Higashi Ward and a cloisonné artist who has made earnest efforts to share her experience of the atomic bombing in other countries. Ms. Fermi and Ms. Tanaka exchanged their thoughts on peace.

Enrico Fermi was an Italian scientist who received the Nobel Prize in Physics in 1938. He fled to the United States after attending the award ceremony because he was afraid that his wife, who was Jewish, would be persecuted by Mussolini’s dictatorship. In the United States, he joined the Manhattan Project and succeeded in controlling the chain reaction of nuclear fission, the first time this feat was achieved. In this way, he played a crucial role in the realization of the project.

Ms. Fermi works as a counselor in Canada. She never had the chance to meet her grandfather, who died at an early age, but she has felt anguish and pride about his work: though he made significant achievements in his lifetime, Ms. Fermi has also had to face the fact that the atomic bombings were great catastrophes. She said, “There must have been a lot of things that he had to keep to himself, things that were top secret, and other people were wary because he came from an enemy nation.” Such thoughts about her grandfather have been ever-present in her mind.

“Instead of staying silent, I want to promote dialogue on nuclear issues.” Starting several years ago, Ms. Fermi has been pursuing a project she calls “Neutron Trail,” writing blog posts, giving lectures, holding workshops, and organizing exchanges with scientists and victims of nuclear tests in the United States.

Ms. Fermi said she was very glad to have made the trip to Hiroshima. “I was deeply moved by Ms. Tanaka’s passion for taking action as an A-bomb survivor to promote peace.” She added, “It’s important for us all to take action to abolish nuclear weapons from the world for the sake of future generations. I can only do so much, but I’d like to contribute to abolishing nuclear weapons by bringing people together.”


Keywords
The Manhattan Project
The Manhattan Project was the U.S. effort to develop atomic bombs, secretly pursued from the early 1940s under an executive order made by President Franklin D. Roosevelt. The project was carried out with top-level scientists and an enormous budget, centering around the Los Alamos Laboratory in New Mexico. The uranium used for the Hiroshima bomb was produced at a facility in Oak Ridge, Tennessee, and the plutonium for the Nagasaki bomb came from another facility in Hanford, Washington. The project was fulfilled when the first nuclear test in human history was conducted on July 16, 1945 at Alamogordo, New Mexico. Atomic bombs were then dropped on Hiroshima on August 6, and on Nagasaki on August 9.