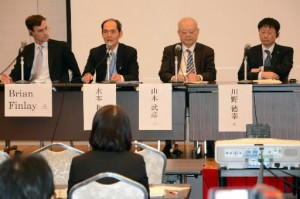 A symposium that examined Hiroshima’s role in bringing stability to the world situation was held at the International Conference Center Hiroshima in Naka Ward on November 21. The event was organized by Hiroshima University’s Institute for Peace Science and the University of Niigata Prefecture. Ten panelists, including researchers from Japan and abroad and former diplomats, debated the issue before an audience of about 80 people.

Kazumi Mizumoto, vice president of the Hiroshima Peace Institute of Hiroshima City University, looked at whether or not Hiroshima’s plea for peace is reaching the people of the world in terms of the global nuclear situation. “We have not achieved great results in furthering nuclear disarmament, but we’ve had some impact,” he said. “We must remain hopeful and continue to convey our message.”

Prof. Noriyuki Kawano of the Institute for Peace Science, alluded to the issue of the aging of the atomic bomb survivors saying, “Although the significance of the atomic bombing of Hiroshima is changeless, we are going to lose the opportunity to talk about it based on personal experience.” He also emphasized the need for better education. “Many young people can’t even understand what the survivors went through,” he said.

Brian Finlay, managing director of the Stimson Center, a public policy think tank, talked about his own experience of becoming a researcher after being moved by the account of an atomic bomb survivor. He noted that it is not just governments that can prompt the international community to take action and cited the influence of civil society and private businesses.

In addition, college professors from the U.S. and Great Britain as well as a former ambassador to the United Nations discussed ways to strengthen international organizations.