Members of delegation to international conference announced: Prof. Hoshi, others to attend meeting on nuclear weapons 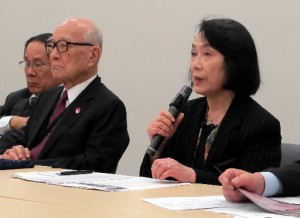 On November 26 the Foreign Ministry announced the members of the government delegation to the International Conference on the Humanitarian Impact of Nuclear Weapons scheduled to be held next month in Vienna, Austria. The delegation will include atomic bomb survivors and experts who have been sent to previous conferences as well as Masaharu Hoshi, a professor emeritus at Hiroshima University. Prof. Hoshi, an expert in radiation biology and physics, conducts research on the effects of the nuclear tests carried out on Bikini Atoll. He will join the delegation for the first time.

An official ceremony to appoint the delegation members was held at the ministry. During the ceremony Yasushi Noguchi, director of the Foreign Ministry’s Arms Control and Disarmament Division, said, “As the only nation to have been bombed with atomic weapons, Japan is in the best position to understand the humanitarian effects of nuclear weapons. I’m happy that all of Japan can contribute to the conference with experts and representatives of NGOs [non-governmental organizations].”

Representatives of Peace Boat and other NGOs who will attend the conference held a press conference at the Diet on the same day. Haruko Moritaki, co-chair of the Hiroshima Alliance for Nuclear Weapons Abolition, outlined her hopes for the conference saying, “For the past five years we have advocated a nuclear weapons convention. The first steps in that direction have been taken through this conference, so we would like to be actively involved.”