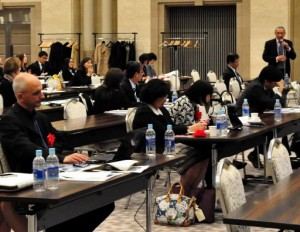 On November 27, a forum for researchers in and out of Japan to discuss responses to radiation-related emergencies was held at the International Conference Center Hiroshima in Naka Ward. The forum was organized, for the first time, by organizations that included the International Atomic Energy Agency (IAEA) and Hiroshima University in order to nurture specialists able to assist in reconstruction efforts following radiation disasters. About 90 people, students and citizens among them, took part in the forum.

Koichi Tanigawa, a professor of Emergency Medicine at Hiroshima University, was one of the participants. Dr. Tanigawa, who served as the leader of Hiroshima University’s Radiation Emergency Medical Assistance Team, worked in Fukushima Prefecture in the aftermath of the accident at the Fukushima No. 1 (Daiichi) nuclear power plant in March 2011. He reported on his experiences, including one situation in which 60 patients from hospitals and nursing facilities located within a radius of 20 kilometers from the stricken power station were evacuated but alternative facilities could not be found for several days and medical professionals were unable to provide them with sufficient care during this move. The patients died, Dr. Tanigawa said, and stressed, “It’s vital to establish systems to provide appropriate care in the event of an evacuation.”

Other presentations involved the need to nurture radiology specialists to anticipate potential accidents at nuclear power plants and the importance of providing information to residents who are frightened by the effects of radiation. On November 28, among other presentations, the Phoenix Leader Education Program, part of the Hiroshima University Graduate School, will share its work on studies of post-radiation disaster reconstruction efforts.