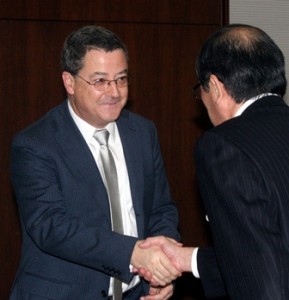 Yves Rossier, secretary of state at the Swiss Foreign Ministry, met with Hiroshima Mayor Kazumi Matsui at Hiroshima City Hall on December 3 and the two exchanged views on efforts to advance the abolition of nuclear weapons. Mr. Rossier said since Japan is a strong ally of the United States, a nuclear superpower, Japan should play a major role in the quest to abolish nuclear arms.

Referring to the fact that Japan lies under the U.S. nuclear umbrella, Mr. Matsui said, “Despite this hard reality, we should strive, step by step, toward the ideal of a world without nuclear weapons and work to bring about greater understanding.”

Mr. Rossier is visiting Japan on official business and came to Hiroshima at his own request. Before meeting Mr. Matsui, he toured Peace Memorial Museum and offered flowers at the Cenotaph for the A-bomb Victims in Peace Memorial Park.