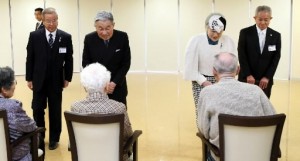 On December 4, after paying their respects at the Cenotaph for the A-bomb Victims in Hiroshima, the emperor and empress chatted with elderly survivors of the atomic bombing and conveyed their hope that the survivors would be well for next year’s 70th anniversary of the A-bombing. The couple expressed concern for the mental and physical scars the survivors bear and spoke of the preciousness of peace.

The emperor and empress spent about 20 minutes at Yano Orizuru-en, a nursing home in Aki Ward where 100 survivors of the atomic bombing reside. The couple spoke to each of 10 representatives of the residents. The emperor asked them questions about the situation at the time such as, “How long was it before you learned that it was an atomic bomb?” He also showed concern for their postwar lives saying, “You must have experienced many days of hardship.” Yurie Okuda, 90, was in Gion-machi (now part of Asa Minami Ward) at the time of the atomic bombing. “I’m really grateful for their expression of concern for A-bomb survivors,” she said.

Ayako Nagao, 86, who was exposed to radiation when she entered the city after the A-bombing, tells children about her experiences. The empress offered encouragement saying, “Please take care and continue your efforts.”

The emperor first came to Hiroshima in April 1949 when he was the crown prince. At that time he said, “We must pursue peace, resolved that such a tragedy will never again befall humankind.” This was the imperial couple’s sixth visit to Hiroshima since the emperor assumed the throne. With this trip they have now visited all four homes for atomic bomb survivors in the city.

Before visiting Orizuru-en, the couple went to Peace Memorial Park in Naka Ward where, amid a light rain, they proceeded along the main approach to the cenotaph and politely responded to the welcome of local residents and laid flowers at the cenotaph for the first time in 18 years. Since their last visit about 95,000 names (40 volumes) have been added to the register of A-bomb victims in the cenotaph, for a total of 292,325 names (107 volumes).

Local resident Yoshinori Matsuura, 66, said of the imperial couple, “I’m sure they always desire a peaceful Japan and the happiness of the nation’s citizens.” Masumi Tsuda, 38, whose grandmother was an atomic bomb survivor, was holding her 4-month-old son, Yoichiro. “When he gets older I’ll tell him about what I saw today,” she said. “I hope Japan will be at peace then too.”