Junior writers meet with American peace activist in Hiroshima: Learn about peace-related activities in the U.S. and Japan 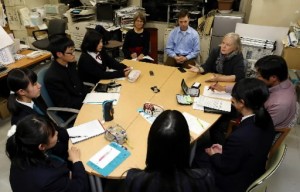 During a recent visit to Hiroshima, American peace activist Diana Roose, 66, met with the junior writers of the Chugoku Shimbun and talked about passing on the atomic bombing experience and about peace education.

Ms. Roose was accompanied by her son, Carl Roose, 37, a graphic designer, and Karen Remmler, 57, a professor at Mount Holyoke College in Massachusetts. The three of them met with seven junior writers ranging from third-year junior high school students to high school seniors.

Ms. Roose asked what sorts of things those with family members who had experienced the atomic bombing had heard from them. Four junior writers said their grandfathers had experienced the A-bombing but that they had heard very little about it from them. They cited various reasons such as that their grandfathers didn’t want to talk about it or that they were 2 or 3 years old at the time and didn’t remember it.

Ms. Roose also asked the writers how, having been brought up in Hiroshima, they would tell their friends and children about the atomic bombing and peace when they grew up. One writer said, “I would like to be able to accurately convey the accounts of the atomic bombing that I have heard.” Another said, “I would like to get people thinking about what peace is without being pushy about it.”

The junior writers asked about peace education in the United States. Ms. Remmler said there were classes in which people learned how to resolve conflicts through discussion. Ms. Roose noted that there was almost no peace education in the U.S. and that young people had no interest in the subject. She said she hoped to get them to take an interest in it by writing about the grief and suffering experienced by the A-bomb survivors.

In 1980, while working as a radio producer, Ms. Roose participated in the Hibakusha Travel Grant for American Journalists, commonly known as the Akiba Project, under which American reporters were invited to visit Hiroshima and Nagasaki to interview atomic bomb survivors. Sponsored by the Hiroshima International Cultural Foundation, the project was intended to help convey the reality of the destruction caused by the atomic bombing to citizens of the U.S., a nuclear superpower. Ms. Roose has been an anti-nuclear activist for many years. In 1981 she wrote a play on the atomic bombing entitled “Ghosts of Hiroshima,” which was based in part on her reporting while a participant in the Akiba Project.

Ms. Roose expressed surprise that the junior writers had not heard about the A-bombing experiences of family members but said she was impressed that they were considering how they could go about conveying the stories of survivors to future generations. Harumi Okada, 15, is a first-year high school student whose grandfather is an A-bomb survivor. “I guess because he’s so close to me, I hadn’t given it any thought until I was asked about it,” she said. “The next time I see him I want to ask him about his experiences.”