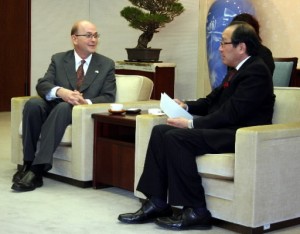 Allen Greenberg, the United States Consul General in Osaka-Kobe, visited the City of Hiroshima for the first time since assuming his post and met with Hiroshima Mayor Kazumi Matsui at City Hall. Hiroshima is seeking to host the 2016 summit of the group of leading nations. Mr. Greenberg expressed support for Hiroshima’s bid as the host city.

“Hiroshima is a special place,” Mr. Greenberg said. “I look forward to returning many more times.” He also referred to U.S. Ambassador Caroline Kennedy’s attendance at the Peace Memorial Ceremony this past August, her first time at the ceremony since taking office, saying, “I’m sure she would like to attend next year’s ceremony, too.”

After serving as the director of the U.S. State Department’s Houston Regional Office and in other roles, Mr. Greenberg assumed his current position in August. He came to Hiroshima to take part in an event involving the Japan-America Society of Hiroshima.