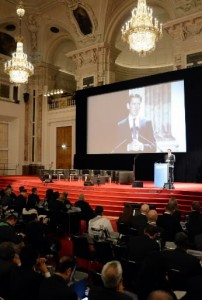 Outlawing of nuclear weapons to be discussed: Survivor gives account of A-bombing of Hiroshima

VIENNA—The Vienna Conference on the Humanitarian Impact of Nuclear Weapons, which will examine the effects of nuclear weapons on health and on the global environment, got under way on December 8. About 160 nations are participating, including the United States and the United Kingdom, two of the world’s five nuclear powers. Both countries are taking part for the first time. Participants in the two-day conference are expected to discuss the outlawing of nuclear weapons, and the statements issued by the representatives of each nation will be a focus of attention.

At the start of the conference, Sebastian Kurz, Minister for Europe, Integration and Foreign Affairs for Austria, the host nation, delivered opening remarks in which he said “it is high time to move from words to real action” to bring about a world without nuclear weapons.

Setsuko Thurlow, 82, a Hiroshima native and resident of Toronto, Canada, gave an account of her atomic bombing experience. “Hibakusha are increasingly frustrated, just as all of us here are, by the lack of tangible progress toward nuclear disarmament,” she said. “This in spite of our baring our souls with painful memories over the past 69 years to warn people about the hell on earth we experienced in Hiroshima and Nagasaki.” She also urged those present to “move forward courageously” toward the goal of prohibiting and eliminating nuclear weapons, saying, “Let us start this process, beginning with negotiations on a ban treaty, here and now in Vienna.”

On Monday Adam Scheinman, the U.S. ambassador to the conference, stated that the U.S. “does not support efforts to move to a nuclear weapons convention, a ban, or a fixed timetable for elimination of all nuclear weapons.” He also said that “progress requires a willing partner and a conducive strategic environment,” indicating that the U.S. remains committed to disarmament in stages.

Masaharu Hoshi, a professor emeritus at Hiroshima University and an expert in radiation biology and physics, is a member of the government’s delegation to the conference. During the debate Prof. Hoshi referred to his research on the effects of the nuclear tests carried out on Bikini Atoll and said there was a need for more research on the effects of internal exposure to radiation.

This is the third time the Conference on the Humanitarian Impact of Nuclear Weapons has been held. The first conference took place in Norway in March of 2013. The second was held in Mexico in February of this year. The conferences are intended to spotlight the inhumanity of nuclear weapons and to break the deadlock on nuclear disarmament. The U.S. and U.K., which are participating for the first time, are expected to put the brakes on debate on the outlawing of nuclear weapons led by the governments of non-nuclear nations and non-governmental organizations.

On the first day of the conference, people who were exposed to radiation from nuclear tests and experts on nuclear issues gave presentations on the effects of radiation. On the second day, participants will discuss various topics, including the relationship of nuclear weapons to current international standards. The chairperson’s summary will also be prepared.

Toshio Sano, a Foreign Ministry official, is the head of the Japanese government’s delegation to the conference. Among the non-governmental organizations, Yasuyoshi Komizo, chairperson of the Hiroshima Peace Culture Foundation, is attending as a representative of Mayors for Peace, whose president is Hiroshima Mayor Kazumi Matsui.