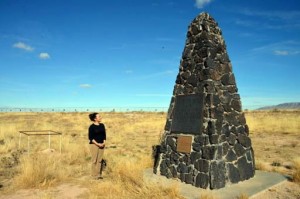 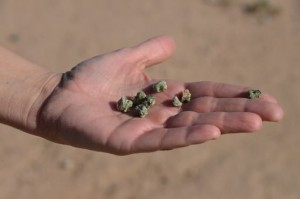 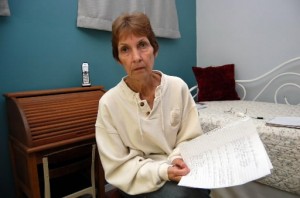 “The Nuclear Age” dawned 70 years ago, on July 16, 1945, at the so-called Trinity Site in the U.S. state of New Mexico. After gaining permission from military authorities at the White Sands Missile Range, which manages the site, the Chugoku Shimbun was able to enter the area and gather information on the ground. Near the site, forgotten sufferers of radiation exposure, in the village of Tularosa, shared their stories.

Trinity Site is located about 150 kilometers south of Albuquerque, a large city in New Mexico. As we drove, a monument appeared, about 3.6 meters tall, rising in a wide plain colored by dried grass. On the nearby fence was a sign that read: “Caution: Radioactive Materials.”

“But the radiation level is low,” said Camilla Montoya, 45, Public Affairs Specialist for the Missile Range. According to a pamphlet, the radiation dose is 1.5 millirems (15 microsieverts) per hour. However, this is still 10 times higher than the natural level of radiation in the area.

On the ground were scattered stones, like green glass, which might be polished and used for accessories. Ms. Montoya picked up some of the stones and explained, “This is trinitite, the molten sand from the nuclear explosion.” I felt reluctant to touch them.

Although the monument and the area around it are located inside a missile range, the place has been designated part of a national historic landmark to tell the history of the Manhattan Project and its development of the atomic bombs. Currently, the site is open to the public only one day a year, in April. Ms. Montoya smiled proudly, saying that they receive thousands of delighted visitors each time.

Meanwhile, Rosemary Cordova, 69, a resident of Tularosa who took part in a demonstration at the entrance of the site when it was open to the public last year, spoke in anger. She said that the demonstrators were berated by visitors, who showed no interest at all in their suffering.

Ms. Cordova is now nursing her eldest son, Danois, 52, who suffers from a brain tumor. She believes that the contaminated land and the internal exposure to radiation received by local residents has had a harmful impact on her family and relatives. She offered a handwritten paper with 75 names, saying that these people had all developed cancer, and were just the ones she knew about.

Ashes fell after the explosion

Henry Herrera, 80, shared his account, describing the conditions that early morning of the nuclear test. He said he was taken by surprise at the sound of a great roar, followed by a flash. When he turned back, he saw a mushroom cloud rising over the mountains. The cloud drifted northeast, and after the wind changed direction, ashes fell a few hours later. Mr. Herrera was 11 years old at the time and had gotten up early to help his father service the car he used for work.

The laundry hanging outside was soiled by the falling ash, so his mother angrily washed it again. Later he heard that “snow” had fallen that summer in other local towns, too. He said that some of the cows on ranches near the hypocenter were affected on the side hit by the flash, with their hide turning a different color.

Sixteen years ago, Mr. Herrera was diagnosed with cancer of his salivary gland. But the U.S. government has not acknowledged that radioactive fallout reached the village of Tularosa.

His wife Gloria, 72, who was just three back then, said that residents were given no prior notice and that the A-bomb test came as an abrupt surprise. They are sufferers of radiation exposure, too, she said, stressing that the government should apologize to them for being abandoned to their fate. The atomic bombs have caused anguish to so many, she said, at Trinity Site, Hiroshima, and Nagasaki.

Today, the United States is moving forward with a plan to turn properties involved in the Manhattan Project into a national historical park. Some of the promoters of this movement are calling for Trinity Site to be included as one of these properties. At the same time, Tina Cordova, head of an organization comprised of residents and former residents of Tularosa Basin, argues that there should also be information presented on the plight of sufferers of nuclear testing, as well as the experiences of Hiroshima and Nagasaki. A one-sided display on scientific achievements should not be permitted, she says.