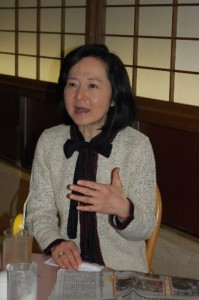 “I would like you to imagine how tragic the Holocaust was through the story of Anne Frank,” said Yoko Ogawa, 53, recalling her own experience visiting Anne’s secret annex in the Netherlands. Ms. Ogawa’s encounter with the book The Diary of a Young Girl inspired her to become a writer. In connection with an upcoming event where young people from Hiroshima will report on their recent study tour to Europe, a trip sponsored by the Hiroshima Peace Creation Fund, the Chugoku Shimbun interviewed Ms. Ogawa about the significance of reflecting on the Holocaust through the pages of the diary left by young Anne. The reporting session will take place on May 31 at the International Conference Center Hiroshima.

“Have the courage to do the right thing”

I first read Anne’s diary when I was in my second year of junior high school. I chose it when I had to write an essay about a book, which was an assignment for summer vacation. At the time, though, I was just surprised how mature Anne was, mentally, and I couldn’t really grasp everything well. When I read it again during my second year of high school, I became intrigued by the realistic feelings she expressed, like her rebelliousness toward her mother and defiance toward the other adults around her. I sympathized with the specific woes she felt as an adolescent girl, because when I read it, I was also trying to push back against my mother’s image of me as the “perfect daughter.” Anne’s diary showed me a suitable way to express my frustrations.

New discoveries in each reading

As I’ve become older, my interpretation of the book has changed. In particular, after I became a mother, I could better understand her mother’s love for Anne. I also came to appreciate how remarkable her father was to look after her with such care so she could enjoy the life she had, and then pursued publishing his daughter’s diary after the war. No matter how many times I read it, I always discover something new. It’s an extraordinary book.

Anne is an ordinary girl, like young girls throughout history. She has a pert nature and is sometimes stubborn. At the same time, I admire her talent for writing. She also had a very good sense of humor. But she left behind no further words, not a single one, after she was caught by the Nazis and later killed. I wonder what she would have written if she had had a pen and paper then.

Writing set her free outside the life she spent in hiding. Her diary made me aware that writing words on paper could offer me freedom, too. Through writing, I wouldn’t be bound by anything or anyone. I feel so grateful that I happened to come across her diary. If Anne had survived, I would have loved to meet her in person.

No legitimate reason to discriminate

Through a series of fortuitous events, Anne’s diary was published, which made her a symbol of the Holocaust. The name “Anne Frank” is a clear reminder of the tragedy of that time. There were over six million victims, like Anne. Rather than seeing the Holocaust as one line written in the chronology of human beings, we have to carefully imagine each individual life.

Looking back at the history of the Holocaust, it seems to me that there was no need for someone to have a legitimate reason to discriminate against someone else. Even now, there are still irrational deaths perpetrated in the world in various forms, such as the sarin gas attack in the Tokyo subway system by the Aum Shinrikyo cult or the terrorism of the so-called Islamic State. You can contemplate the causes through Anne’s diary.

I would like this book to be read by more young people. As the older generation, who actually experienced the war, passes on the baton to younger generations, I believe young people can consider the facts of history more objectively, without the bias of raw emotion, because they don’t generally identify themselves as either a war victim or victimizer. When others do something wrong, I hope they won’t shut their eyes, but have the courage to do the right thing.

Yoko Ogawa
Born in Okayama Prefecture in 1962, Ms. Ogawa won the Akutagawa prize for Ninshin karendaa (Pregnancy Calendar) in 1991. In 1994, she visited Anne Frank’s secret annex and the former site of the Auschwitz concentration camp, which she had long desired to see, and wrote an essay titled “Anne Furanku no kioku” (“Memories of Anne Frank”). Her novel Hakase no aishita sushiki (The Professor’s Beloved Equation), published in 2003, was a bestseller.

The Diary of a Young Girl
The diary kept by Anne Frank (1929-1945), who was born in Germany. The diary describes her days and feelings from the ages of 13 to 15 while she was in hiding with her family in Amsterdam, the Netherlands, to escape from the Nazi persecution of the Jews. It ends when the Nazis discovered them and took them prisoner. Although Anne died in a concentration camp, her diary remained in the secret annex and was preserved by a woman who helped care for Anne’s family. After Otto Frank, Anne’s father, survived the camp and returned to Amsterdam, he received his daughter’s diary, then edited it and had it published. Since that time, The Diary of a Young Girl has become one of the world’s most widely-read books. In 2009, it was added to the Memory of the World Register.