Telling of the atomic bombing through poetry:Poet from Coventry, England visits Hiroshima, serves as bridge between two cities 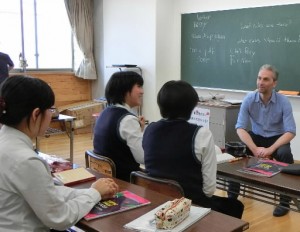 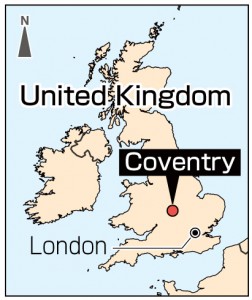 A poet from Coventry, England has paid a visit to Hiroshima, hoping to serve as a bridge between the two cities. Antony Owen, 42, gave letters from children in Coventry to local high school students and delivered a letter from the mayor of Coventry to Hiroshima’s mayor. During World War II, Coventry was devastated by a series of bombing raids by Germany.

Mr. Owen visited Hiroshima Jogakuin High School in Naka Ward, where he gave first-year students letters from seven junior high school-age students at Cardinal Newman, a Catholic secondary school in Coventry. He also discussed a poem he had written on the atomic bombing.

Coventry holds an event commemorating the atomic bombings of Hiroshima and Nagasaki every year on August 6. At this event a message from the mayor of Hiroshima is read. In his letter to Mayor Kazumi Matsui, which Mr. Owen delivered to city hall, the mayor of Coventry expressed his hope that the friendly relations between the two cities would continue.

Mr. Owen also held a poetry reading in Peace Memorial Park, visited the Peace Memorial Museum, saw trees that had survived the A-bombing and heard an account of the experiences of an A-bomb survivor. Mr. Owen said he sensed a desire for commemoration throughout the city and noted that when foreigners like him write about the A-bombing it should be easier for them to inspire people. He said he hoped to tell people about the A-bombing of Hiroshima through his poetry.