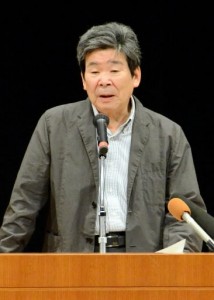 On June 29, Isao Takahata, 79, who directed the animated film Grave of the Fireflies, spoke at a community hall in Kita Ward, Okayama. Mr. Takahata, who lived in the city of Okayama during his childhood, shared his experience of the Okayama Air Raid for the first time. Vividly describing how he fled from the fire as incendiary bombs rained down, he said that, in order to preserve peace, “Article 9 of the Constitution must never be revised.”

Mr. Takahata was nine years old when the people of Okayama experienced the air raid by U.S. bombers on June 29, 1945. While sleeping on the second floor of his home, he was awakened by explosions and found that areas outside his house were already in flames. Assuming an air raid, he fled barefoot from the house in his pajamas and, along with his sister, who was a year older, ran toward the city center.

As they fled, Mr. Takahata continued to hear “an ear-splitting sound, like tin sheets being dragged on the ground.” When he looked up at the sky, he saw a hail of incendiary bombs plunging down. Standing under the eaves of a house to avoid a direct hit, they doused themselves with water from a fire cistern and dashed through the flames. On the way, his sister was wounded by bomb shrapnel and fell unconscious. Recalling that moment, he said, “I was absolutely terrified.” He shook his sister frantically and yelled her name, again and again. When she finally came to, they fled once more toward the heart of the city.

In the morning, he returned to his house and found it had burned to the ground. A number of people from his neighborhood had lost their lives after jumping into a nearby river. Others had died of stifling heat while seeking refuge in air raid shelters. As he recounted that horrifying day, he said, “I saw so many bodies. I was so horrified, I was trembling and my teeth were chattering.”

In his talk, Mr. Takahata stressed the danger of the moves now being made by the government of Prime Minister Shinzo Abe as it seeks to advance bills involving the nation’s security and quash the voices of opposition. “In this 70th year since the end of the war, Japan faces a major turning point. We should learn from history that the fate of our future could be a nation which again wages war.”