Hiroshima, 70 Years After the Atomic Bombing: Rebirth of the City, Part 1 [6] 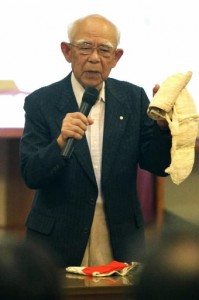 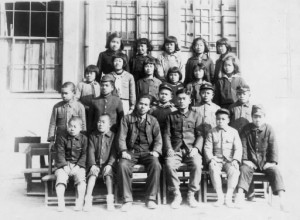 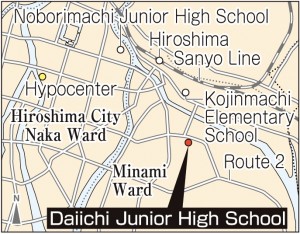 Takeshi Masuda, 90, a former junior high school principal, was an educator for 40 years. His career began in the ruins of Hiroshima, teaching children in the so-called “open-air classrooms.” Though there was a shortage of food and clothing at the time, Mr. Masuda said that he still felt some relief at the situation. Turning pages of a photo album at his home in Higashi Ward, he explained that this feeling rose from the fact that he no longer had to teach students the lesson he had learned at school, which urged the Japanese people to sacrifice themselves, even their lives, for the sake of the nation.

In 1931, the year the Manchurian Incident took place, Mr. Masuda entered Hakushima Elementary School (part of today’s Naka Ward). His studies there were dominated by militarism, with textbooks and school songs focused on “loyalty and patriotism.” After entering Hiroshima Prefectural Normal School (now Hiroshima University), he underwent military drills and was taught to fire a gun. From 1944, he was mobilized to work daily at the Kure Naval Arsenal, where he helped produce torpedo and cannon tubes. Somewhat resigned to his fate, he said that he didn’t feel upset when he received a draft notice in April 1945.

However, he still holds a keen memory of the night before he left home to become a soldier. At his home in the village of Hesaka (part of today’s Higashi Ward), his mother, Hisako, gave him a thousand-stitch belt, made as a protective charm for soldiers in the field. They also slept in the same room for the first time since he was a child. In the morning she took his hand and said, “Come back to this house again.” Nevertheless, that September when he was demobilized and returned home, his mother wasn’t there. On the day after the atomic bombing, she went into Hiroshima to search for her niece. She then took in 48 A-bombed acquaintances into their home and later collapsed while caring for them. She passed away on August 31, and her body was cremated. She was 42. “Her health must have been affected by the radiation from the atomic bomb,” Mr. Masuda said.

But he had no time to mourn. The Hiroshima Normal School announced that he would graduate earlier than expected. In October, he was assigned to serve as a teacher at Gion Elementary School in Asaminami Ward. The next year he was transferred to Kojinmachi Elementary School in Minami Ward. Because the school buildings had been completely destroyed, he taught in temporary classrooms separated by partitions. “We could clearly hear voices from the other classes,” he said. “Most of the classrooms had no ceiling, but the children were still happy to be there.”

Under guidance given by the General Headquarters of the Allied Forces (GHQ,) he burned educational materials with militaristic themes and inked out inappropriate parts of the students’ textbooks. The GHQ also conducted an “eligibility test,” which teachers had to pass in order to continue teaching, and underwent retraining. Though the many educational reforms, driven by the sweeping change in society from an authoritarian system to democracy, felt disorienting, he taught his students to think for themselves and express their own opinions.

In 1947, Mr. Masuda became a science teacher in junior high schools, which was now a compulsory level. After teaching at Daiichi Junior High School (now Danbara Junior High School), he began teaching at Noborimachi Junior High School, in Naka Ward, in 1951. There he faced the horror of the atomic bombing squarely, as many students were still haunted by their experiences. One girl’s face had been burned badly. Some students lost their parents in the bombing and commuted to school from an orphanage. Mr. Masuda did his best to provide them with both material and mental support. In these conditions, a wealthy family stepped up and secretly provided monthly funds so he could buy the children notebooks and shoes.

When Sadako Sasaki, who would have entered Noborimachi Junior High School, died of leukemia in 1955, a campaign was launched to raise the Children’s Peace Monument, which stands today in the Peace Memorial Park in Naka Ward. Mr. Masuda worked on this campaign with members of the student council. Students who had lost family members and friends, as well as teachers educated under militarism, were painfully aware of the folly of war. “For that reason all of us were pursuing this campaign very seriously,” he said. In 1958, the monument was unveiled.

Since retiring in 1985, Mr. Masuda has remained in touch with students he taught during the postwar period of reconstruction. On July 19, he was invited to a gathering to share A-bomb experiences, which was held in Naka Ward by one of his former students at Noborimachi Junior High School. At the event he described his experience to the audience, telling them, with a wave of emotion, “War is pointless. Some people say nuclear weapons are useful as a deterrent, but human beings will be wiped out if they are actually used. I’d like you to think about what you can do to help abolish nuclear weapons from this world.”