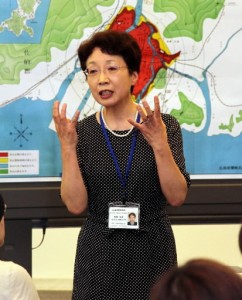 People of younger generations who did not experience the atomic bombing and the war are taking up the legacy of the A-bomb survivors to become an engine for realizing the abolition of nuclear weapons and a lasting peace in the world. They share the same key conviction often uttered by the late Barbara Reynolds, a peace activist from the United States: “I, too, am a hibakusha.” These people include “Memory Keepers,” who have been trained by the City of Hiroshima, and second-generation A-bomb survivors. In this series, the Chugoku Shimbun follows their efforts to take up and convey the A-bomb experiences in the summer marking the 70th anniversary of the atomic bombing.

Weight of sharing survivors’ lives is held firmly in mind

“If he hadn’t begged his mother to come home that day, she wouldn’t have suffered the atomic bombing. He told me that this has haunted him,” said Noriko Mineoka, 56, a housewife and resident of Asaminami Ward. She was speaking to an audience of 20 people on July 18 at the Hiroshima Peace Memorial Museum during a session for sharing A-bomb accounts.

Ms. Mineoka is a member of the first group of Memory Keepers, a program the City of Hiroshima launched in fiscal 2012 with the aim of handing down the A-bomb experiences on behalf of the aging A-bomb survivors. She has been conveying the account of Takashi Teramoto, 80, a resident of Hatsukaichi, Hiroshima Prefecture, since April. Mr. Teramoto experienced the atomic bombing at his home in Hirosekita-machi (part of today’s Naka Ward), one kilometer from the hypocenter. Before she began sharing his experience, Ms. Mineoka worked on handing down his memories over the course of three years.

Lingering remorse from that time

In early August 1945, when Mr. Teramoto was 10 years old, he was staying at a temple in Miyoshi, Hiroshima Prefecture, to where he had evacuated with a group of other children over fears of air raids in the city of Hiroshima. On August 4, because he was ill, his mother came there. She wanted to stay at the temple until August 6, but he was adamant about returning to the city. So they went back to Hiroshima that evening, two days before the atomic bombing. In the A-bomb attack, which devastated the city, his mother was caught under the wreckage of their house. She passed away on August 15. Mr. Teramoto, who survived the bombing, has been unable to escape his feelings of remorse.

Ms. Mineoka describes these feelings as a “weight in his mind.” She took half a year to write up Mr. Teramoto’s account in about 10,000 words. She has memorized it and has no need to glance at the text during her 40-minute presentation.

It was 2001 when Ms. Mineoka, a second-generation survivor herself, began giving greater attention to the experience of the survivors. Succumbing to a seizure which affected her brain, she lay unconscious for half a day. That experience of hovering between life and death prompted her to reflect on what she could do in this connection. In 2009, she began serving as a Peace Volunteer, guiding visitors to the Peace Memorial Museum and other sites and conveying the inhumanity of the atomic bombing.

She seemed to be well prepared to become a Memory Keeper, but once training sessions for this program began, Ms. Mineoka carefully weighed the role she would take up, thinking, “I will be relating the life of another human being. I can’t be half-hearted about how I handle their memories.” After she was matched with Mr. Teramoto, she met with him almost every month and took notes as he shared his account. She also accompanied Mr. Teramoto to the place where he had evacuated as a child. Ms. Mineoka listened to the head priest of the temple, who is familiar with the events that affected Mr. Teramoto.

Feeling compelled to “face this reality from various angles,” Ms. Mineoka broached the subject with her mother, Toyoko, 84, who cared for the wounded at the First National School (now Danbara Junior High School in Minami Ward), which had served as a first-aid station, and her mother-in-law, 79, who was exposed to radiation after entering the area near the hypocenter.

Mr. Teramoto commends Ms. Mineoka’s talk, saying, “She is persuasive because she’s not simply copying my account, she’s also conveying her desire for peace in her own words. As she faced up to my experience so fully, she can now stand by the sorrow of the A-bomb survivors.”

On July 24, Ms. Mineoka gave her fourth presentation as a Memory Keeper. Each time, she felt encouraged by the earnest eyes of her listeners. She will now take up the “heavy responsibility” of conveying the accounts of two more A-bomb survivors in addition to Mr. Teramoto.

Her sessions always end with this sentiment: “We can’t actually experience the experiences of that time, but we can imagine them.” She has come to feel, as a Memory Keeper of the A-bomb experience, that reflecting on the lives lost that day and the lives that have gone on, but have been damaged by the catastrophe, is the first step toward preventing more people in the world from becoming a hibakusha.